New EP and “Kentucky Bourbon” single blend classic country and modern stylings. Since they started out as a teenage garage band, Lyn Avenue as an entity has grown up just like its members. 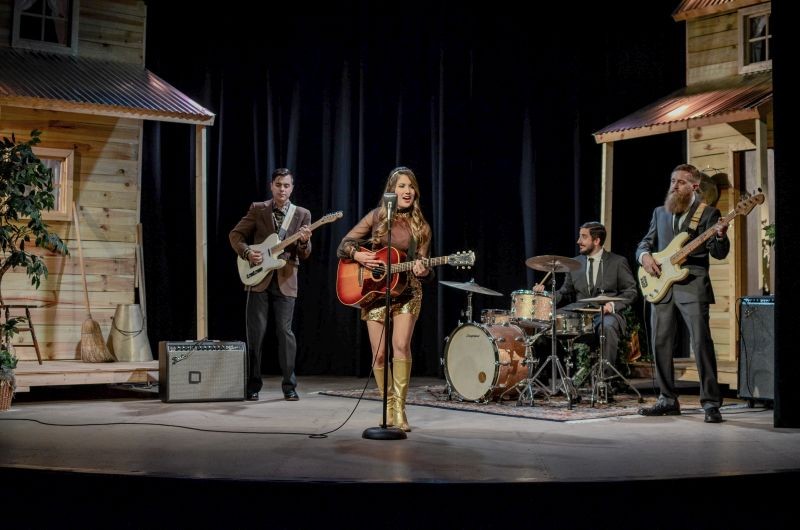 SAVANNAH band Lyn Avenue has made their hottest record yet—literally and figuratively.

“We went in the studio in August with no AC,” vocalist, guitarist, and songwriter CC Witt remembers. “Literally, sweat, blood and tears went into this!”

Since they started out as a teenage garage band, Lyn Avenue as an entity has grown up just like its members, refining sounds, honing songwriting strengths, and deepening a chemistry that’s been there since the beginning. It’s all evident in their new, highly-anticipated EP, ‘Never Been to Nashville,’ available at the band’s Tybee Post Theater release concert on Friday.

Though they’re one of their home state’s favorite country acts (Lyn Avenue has been crowned “Best Country Band” not once but three times by the Georgia Music Awards and the Georgia Country Awards), that Southern flavor wasn’t always a part of the sound.

That’s how Witt spent the first day she met Patrick Ellington, her co-writer in the band and, as of a few months ago, husband.

“The day we met, we were playing music,” Witt recalls. “He came over to play. We’ve known each other for 11 years and we grew and we argued and we wrote songs together.”

Witt’s childhood home certainly had its share of country music played throughout—her dad listened to Marty Robbins and Elvis Presley—but her folks also loved disco, soul, and The Police. That diverse influence is evident on ‘Never Been to Nashville,’ which goes full old-school country on lead single “Kentucky Bourbon” but dips into progressive country sounds throughout the rest of its tracks.

In those early days, Witt was inspired to try writing a country song for one of her best friends, a lover of the genre. The result was fan favorite “Guardian Angel,” which has finally been recorded for the ‘Never Been to Nashville’ EP.

Country was the perfect style for Witt’s writing.

“It just clicked,” she shares. “It was natural, and we started gravitating toward that sound and my writing style lended itself more to a country style. I focus more on emotions when I write. Patrick writes more visually, I think. Together, we make a country song.”

When it was time to hit the studio, the band selected the songs that capture them at their best, reaching back to the early days for “Guardian Angel.”

“We wanted to give those songs a second chance and bring them to maturity,” explains Witt. “Since ‘Guardian Angel’ was the song that started our journey with country music, we really wanted to bring that one to fruition. ‘You Don’t Need Me’ was a bonus track, and ‘Little Big City Town’ I wrote and put on my solo EP [2016’s ‘Down Memory Lane’], so we decided to make it a full band version.”

Lyn Avenue recorded ‘Never Been to Nashville’ at Dollhouse Studios supported by a mosaic of local musicians. The EP employs four different drummers, as well as Igor Fiksman (Damon and the Shitkickers) on pedal steel, Jay Rudd (City Hotel) on mandolin and banjo, Kenny Munshaw (co-owner of Dollhouse Studios) on keys, and Witt’s aunt, Nancy Witt, on keys.

“We just had a lot of ideas, and we tried them all and it ended up coming together,” Witt recalls of their time in-studio. “We definitely want to show people that we’re not from this bro-country stuff that’s on the radio. We want to write about real things and substance. And we still really like to write catchy songs! We want to continue with that classic country vibe.”

These days, Witt and Ellington are considered the core of the band, bringing in bassists and drummers to support their sound live. For their album release show, Lyn Avenue will include drummer AJ Davis, bassist Larry Jones, Fiksman on pedal steel, and some special surprise guests. Everyone attending the concert will receive a free ‘Never Been to Nashville’ EP. City Hotel’s Aaron Zimmer and Jay Rudd will perform an opening set.

“We’re just grateful,” Witt says. “Everyone’s been so gracious and supportive and kind, especially with our single [“Kentucky Bourbon”] that we released. We’re really excited to share all this with everybody else. We’re trying to put together a good show. It’ll be the best one yet!”