Guitarist John Jorgenson’s jazz quintet is just one of many diverse projects he’s done over the years. Though he’s played with a lot of different artists spanning a wide variety of genres, he’s always been perhaps most associated with roots music thanks to his work with the Desert Rose Band and the Hellecasters.

Jorgenson is a musical chameleon in the truest sense; his ability to weave in and out of genres and transcend labels has made him one of the most intriguing instrumentalists of the past several decades.

Ahead of his gypsy jazz quintet’s show at Randy Wood Guitars on Fri., Nov. 8, we caught up with Jorgenson to talk all things music. 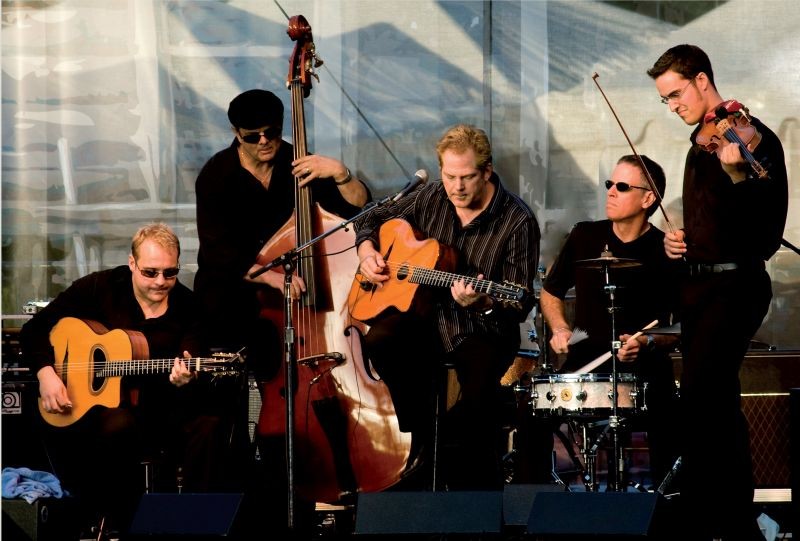 Tell me about the genesis of the Quintet. How did the group come together and what was the impetus for a project like that?

I first got interested in Django Reinhardt in the late 70s. I’d hoped to make that style my career emphasis, but at that time there was not any sort of visibility or scene for this style. I went along with my career in other styles, keeping the gypsy jazz style alive just for my personal satisfaction. By 2000 the Internet had allowed for fans of Django and gypsy jazz to find each other to the extent that a scene developed in the US—complete with festivals and opportunities to perform.

In 2003 I was asked to play Django in movie called Head in the Clouds, which spurred me on to finish an album called Franco American Swing. In order to promote the album I assembled the Quintet, and it’s developed beautifully and organically from there.

You’ve worked in a lot of genres over the years. Where did you begin musically, when you were first starting out?

Who were some of your early influences as a guitar player?

Certainly the Beatles were the main early influence, along with The Who, Rolling Stones, Buffalo Springfield, Jimi Hendrix, Led Zeppelin, Humble Pie, etc.

You play a lot of instruments aside from guitar. Is there one in particular that you tend to gravitate towards when you’re in a creative headspace or writing mode?

Both piano and guitar are great writing instruments, sometimes mandolin, but I get inspired by electric guitars as well.

If it’s a song with lyrics, I’ll usually get a lyrical and melodic fragment in my head that expresses my feelings about something that has happened to me or a friend. Then [I’ll] expand on that idea until a full song has appeared. For instrumental pieces, I often just sit with a guitar and play for fun until a phrase hits my ear that I’d like to repeat, then I’ll take that idea and flesh it out.

You’ve played alongside countless legendary artists—what do you get out of those gigs on a musical level that you don’t get from your own projects?

In my own musical projects I get to choose everything, but when playing with another artist I may have to move into territories that I normally would not go into. That serves to ultimately expand me as I find my way to an internal comfort level. I also can learn from getting “inside” other people’s songs, both musically and lyrically, taking new ideas and inspiration for myself to use later!

I’m curious, as someone who has ventured in so many directions on the same instrument for years, what keeps things fresh as a guitar player for you?

It’s kind of like knowledge, and the saying, “The more you know, the more you realize you don’t know.” I feel that way with the guitar, in that the more I’m able to stretch my tonal and stylistic palette and technical ability, along with furthering my emotional content and connection with the music, the further I can see the possibilities going. I’m just curious to see how far I can take it all!

In that same vein, what keeps you going in general, musically speaking?

My tastes are so diverse, it could be listening to a beautiful symphony orchestra, or a classic Beach Boys harmony, or hearing a combination of sounds and tones in my mind that could work together. These things inspire me, and push me to create the unexpected when recording parts and contributing to others’ projects. There are also countless musical ideas I’d still love to express, even in the styles I’m known for, much less the others that I don’t get to play [as often].

Have you discovered or explored anything lately that’s inspiring you at the moment?

I do love the sound of the Ukrainian Bandurist Chorus. [And I’m] loving revisiting the classic Abbey Road album with its 50th Anniversary happening. So as usual, pretty eclectic!