A tale of success, with help from Park Place Outreach 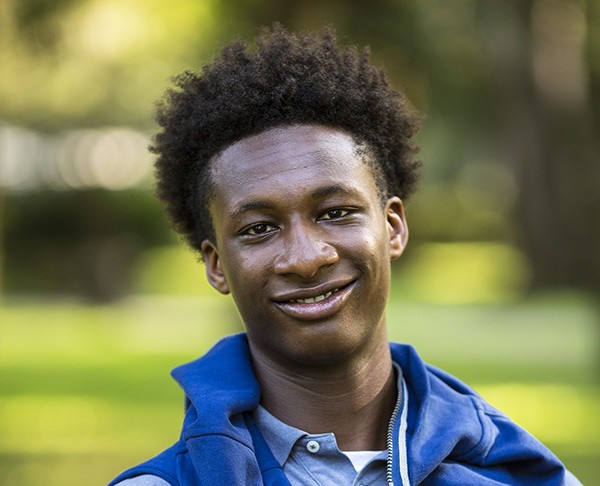 JAVONTE BLACK is shy at first.

The soft-spoken 19 year old considers each word before saying it. But ask him about things he loves and he comes to life.

His landscaping job? “I love it. It gets dirty though. It’s like finishing a painting, especially after hard work. When you’re dirty and sweating and dirt running on your face, you can look back at it and feel good.”

His vegan diet? “I really like a vegan burger—that’s my favorite food. I’ve been on and off for two or three years. It was the hardest.”

His morning routine? “When I get out of bed, I don’t make it right then and there. I get up and do my yoga and would meditate. I like the child’s pose.”

The sparkle in Javonte’s eyes is unmistakable. You’d never know, just from looking, that this exuberant young man is still on probation for an armed robbery.

A few years ago, Javonte was living in a Bayview apartment with his mom and seven siblings.

Around this time, Javonte and his friends found a BB gun. They needed some cash, so they went downtown and held up a few places. He shakes his head: “A stupid decision.”

Javonte was arrested on armed robbery charges, which carries an automatic 10-year sentence. He was only 15 years old.

In juvenile court, Javonte changed. “I used to be this calm person, and I was an animal,” he remembers. “I was in the cell most of the time, fighting and bucking.”

Despite that, Javonte spent just 11 months at the Savannah Regional Youth Detention Center. How did that happen?

“You had someone praying for you,” Kevin Ford told him.

Kevin is the Case Manager for Park Place Outreach, a youth emergency shelter that has served Chatham County since 1984. They provide a stable living situation to runaway and homeless youth, a chronically underserved population here in Savannah.

After his release, Javonte went to live with his grandmother, but the living arrangement didn’t work out. So his probation officer, who was familiar with Park Place, referred him to the shelter’s Transitional Living Program.

At TLP, boys between 18 and 21 live in a safe, stable environment while working towards becoming independent and self-sufficient. They’re provided a safe place to live with decreasing levels of supervision, and the program prioritizes education and employment to help set the boys on the right path.

Since arriving last September, Javonte has earned his GED and started school at Savannah Tech for business management. He plans on owning a landscaping business, inspired by former Mayor Eddie DeLoach and his company.

Landscaping hasn’t always been Javonte’s thing, aside from taking a push mower out on the lawn as a kid. But the opportunity presented itself in the form of a helpful board member.

“One of our board members came to us and said that her husband owned a landscaping business, and they wondered if anyone needed a job because they had opportunities for employment,” says Cheri Dean, program director for TLP. “She introduced them, and he’s been great.”

These days, Javonte gets up at 6 a.m. to make it to work by 7. He works until 5 or 6 p.m., and when he gets home, he takes an hour break before diving into his studies for school. Cheri says she’s known him to stay up until 10 p.m. reading.

That’s another passion of Javonte’s that bloomed while at TLP. He’s actively involved in the group’s book club, which recently read “The Four Agreements: A Practical Guide to Personal Freedom” by Don Miguel Ruiz. Javonte easily recaps the book and its titular four agreements: be impeccable with your word, don’t take anything personally, don’t make assumptions, and always do your best.

At first, Javonte wasn’t into the book club, but now he loves leading others in discussion, which Cheri says he did with the four or five other members.

“I like everybody’s perspective,” he says. “I get to know people every day. Every time they talk, I get to know them more and more.”

It’s taken a while for Javonte to warm up to people and break out of his shell. That happened while he was part of Deep’s Block by Block program, which works with high school-age kids to conduct street-level research and document stories of their community.

Javonte was recommended for the program by his former PO, but he wasn’t quite sure what to make of it at first.

“I just didn’t want to go,” he remembers. “My grandma was like, ‘Just go for the first day and see how it is.’ Everyone was introducing themselves and I was like, I didn’t know this world existed.’”

Javonte was so quiet the first day that the rest of the group thought he didn’t like them. Eventually, with encouragement from his partner Elijah, he began speaking up more in the group. Now, Javonte is an Assistant Teaching Artist with Block by Block, but that’s currently on hold because of the pandemic.

Part of Javonte’s job with Deep is to work with kids who used to be just like him: young men in the juvenile court system who are behind academically, says Kevin, who also used to work with WREP and would do workshops at Javonte’s school.

“Because he was there once, he knows how to handle them,” says Kevin. “There was one opportunity for me to put a kid out, and he told me, ‘No, keep the kid in—let me work with him.’ He has the ability to work with those guys in ways that we can’t because he’s been there.”

“He’s just a young man,” adds Javonte. “I think his issue was he plays too much, so I feel like, no need for him to leave. When I was in school, that was my specialty. I was the worst kid in the classroom.”

Now, Javonte is able to do for younger kids what Park Place and Deep have done for him, but that’s not quite how he sees it.

“I don’t feel any special type of way about it. I don’t see it as, ‘Oh, I’m helping them.’ They already got it,” he confides.

Both Cheri and Kevin sing Javonte’s praises—he’s driven, he’s appreciative, he’s a natural leader. Kevin tells Javonte that he’s heard some of the conversations between other boys in the house and that they look up to him.

“I don’t think you know it, but you lead a lot more than you believe,” Kevin says. “They do look up to you.”

But Javonte, who can more than put himself in their shoes, finds the inspiration reciprocal.

“I gotta get like them,” he confides. “They inspire me.”