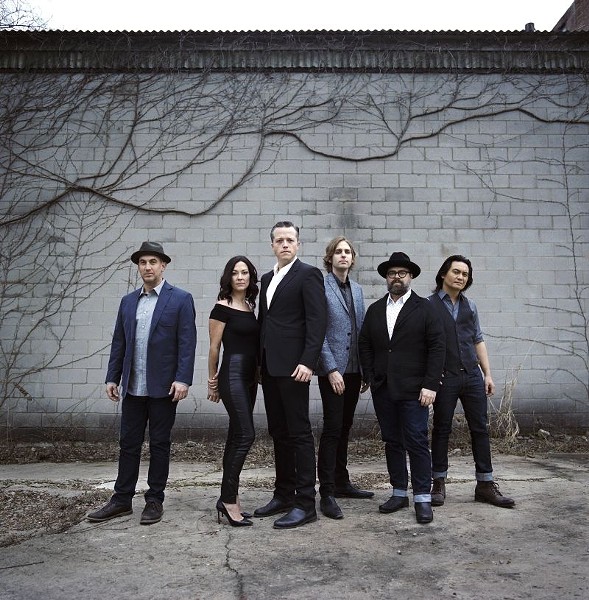 LIFE IS clearly good for Jason Isbell. Since embracing sobriety six years ago, his career has seen an upward trajectory with a string of critically and commercially acclaimed albums that have won him Grammys and Americana Music Honors & Awards.

Isbell’s personal life has blossomed as well. He and Amanda Shires were married by fellow musician Todd Snider in February 2013, and the couple’s daughter Mercy Rose was born on Sept. 1, 2015. Hell, the guy even gave up smoking several months ago.

And now the Alabama native has released The Nashville Sound, his sixth solo record that finds him once again working with producer Dave Cobb (Shooter Jennings/Sturgill Simpson). As has been his way in the past, Isbell’s latest collection of 10 songs form a series of vignettes that serve as a musical journal.

If his 2013 album, Southeastern, was about getting sober and 2015’s Something More Than Free reflected Isbell’s new clarity, who’s to say The Nashville Sound isn’t about the path going forward? The 39-year-old singer-songwriter won’t dispute that notion.

“I didn’t come up with it, but I don’t disagree with that,” he says with a laugh in a recent phone interview.

“I stay away from that—what does this record mean and all that kind of stuff? That’s not for the creator to come up with. What I try to do is make every individual song as tight and as correct as humanly possible. There are certain things that are going to come to the surface. There are going to be themes between the songs that the listener will probably be able to pick out because those are just things that my heart and life are in. These are things my mind focuses on.”

Whereas his most recent records have been credited to Isbell alone, this latest effort has his longtime crew the 400 Unit front and center, not only on the album cover, but throughout the proceedings.

Shires also makes her contributions known, be it on the bluegrass-flavored ode to the couple’s daughter that is “Something to Love” or the harmonies and songwriting contributions she makes on “Anxiety,” a composition that addresses the effects of mental illness.

This rare co-writing situation was something Isbell felt necessary in order to capture the nuances of this malady, particularly how people suffering from it also have to grapple with other peoples’ perceptions of what they’re going through.

“I don’t have a clinically diagnosed anxiety issue or these sort of crippling attacks where I can’t function. But I did want to cover that and represent that aspect of things in the song,” he says.

“So I went to my wife, who has more experience with that kind of stuff and we co-wrote that song. I wanted to be specific and describe people’s experiences when they have these sort of moments where they’re disconnected from reality and things get overwhelming. So I went to her about that,” he says.

“I think Dave Cobb’s job of producing really helped the song. It does create, without being too literal, a lot of tension before the release,” Isbell added.

“And I think that’s really a good way to represent any kind of psychological struggle in the lyric of the song. And as far as I’m concerned, stigma has done more damage to the human experience than just about anything else. For alcoholism, addiction or any kind of mental illness, it’s such a terrible thing that you have to overcome first—that fear about people knowing something is wrong before you can fix it. To me it seems there shouldn’t be any shame in you attempting to figure out what’s wrong with you and get it sorted.”

One of the more pointed cuts on the new effort is “White Man’s World,” in which Isbell approaches that third rail of race. It’s the kind of self-examination that explores the notion of white privilege, a conversation many people are not willing to have.

“You have to come at those things with a little bit of courage because it’s hard to write about race for anybody. In the process of documenting my own life, teaching myself some things and maybe trying to present big questions musically to myself, I wanted to question my role and job in all of this. How do I keep myself aware? How do I keep myself as conscious as possible of the fact that I’m given opportunities that other people aren’t necessarily given?” he asks.

“There are a lot of doors that are open for me that are sealed for women or minorities. My goal with this song, as much as anything else, was really just to suggest that it might be a good idea to evaluate your own particular role and attempt to make things better in tiny increments. It’s not going to solve anything and it’s not going to make up for anything that might have happened to anyone’s ancestors, but at the same time, I’m trying to say what I think my job is and it’s about the best that I can do.”

With the culture wars at a seeming all-time high, Isbell is quick to dispel the idea that with songs like “White Man’s World” and “Hope the High Road” are simply political. For him, it’s far more personal.

“There are things that people would call political about this album, but I don’t think political is the right term. It’s about your system of beliefs and I think a lot of people call that politics,” he explains.

As for what concert-goers can expect as he takes his new songs on tour, Isbell is pleased that his recent success has allowed him to reinvest in adding to his stage show. He’s also happy that The Nashville Sound is giving his show a boost in energy. On the new album, Isbell and the 400 Unit organically found the music taking on a more rock and roll-flavored feel.

“I think there are more rock songs on this record than we’ve had in the past and that’s just a happy accident. I used to set out to do that and then I realized that’s not the way to do it,” he says.

“My best bet is to write the best songs that I can and not think about it any further than that. But, I got lucky here with some rock and roll songs on this album. So I think it’s going to be a louder and more up-tempo show than we’ve had for the past couple of records. I’m excited about that. That’s always good news,” says Isbell.

“We’ve stepped the production up, spent some money on some lights and some really cool-looking stuff going on,” he says.

“It doesn’t look like EDM or anything like that. It’s still a rock show. You start selling a few thousand records and you have to stop looking like a bar band. We’ve taken that pretty seriously, so it’s a pretty good complete experience now.”