CAILA BROWN, chair of the Savannah Bicycle Campaign board of directors and Complete Streets program manager for Georgia Bikes, made a provocatively titled presentation at the Georgia Bike Summit on Oct. 13: "Bicycle advocacy is no longer just about bikes. Should our names reflect this?"

In the case of the bicycle advocacy organization she leads, at least, the answer is yes.

On Nov. 29 the Savannah Bicycle Campaign began operating as Bike Walk Savannah and announced its goals of promoting “people-powered mobility” and creating “an equitable environment for walking and biking in Savannah.” 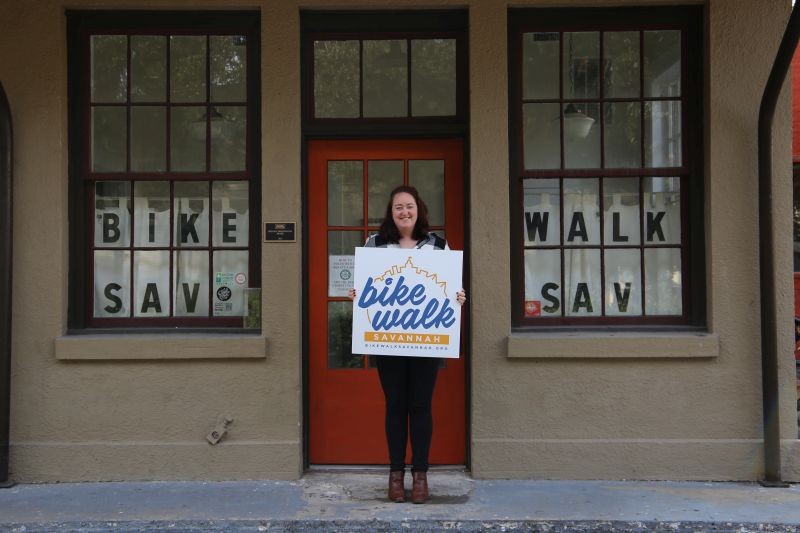 This does not represent a radical change in the mission of the nonprofit, which was founded in 2008. Rather, it reflects the work it’s been doing for many years, Brown said. SBC has a history of collaborating with other organizations, including Chatham Area Transit, on projects that are not bicycle specific.

An ongoing partnership with Healthy Savannah led to the adoption of a Complete Streets Ordinance by Savannah City Council in 2015, which was aimed at making streets safer and more accessible for all users, no matter their mode of travel.

More recently, SBC teamed up with the Ardsley Park / Chatham Crescent Neighborhood Association on “Ardsley in Motion,” a comprehensive assessment of infrastructure in the neighborhood gathered by volunteers who conducted weekly “walk audits.” Bike Walk Savannah hopes to conduct similar efforts in other neighborhoods next year.

Still, Brown said, there are risks to rebranding bicycle organizations, even when done in order to better convey their missions.

“For some advocacy organizations, their main support comes from bike clubs and avid recreational riders,” she said. “They are concerned about losing their earliest and most fervent supporters.”

In the case of Bike Walk Savannah, however, Brown said the new name is a way to engage with residents who don’t think of themselves as “bike people,” but are proponents of safer streets, expanded mobility options, better quality of life, healthier communities, and more livable neighborhoods.

“I think people believed that because we had ‘bicycle’ in our name, we were focused on the issues that pertained to — as they assumed — a fringe group in the community that required special benefits,” Brown said.

The name may also counter suggestions that the organization should “stay in its lane,” to use a phrase that’s been in the news lately, when it advocates for programs, policies, and projects that may not be generally associated with bicycling. It helps explain, for example, why Brown attended a recent public meeting about “NewZO,” the proposed zoning ordinance.

“I talked with residents and city officials about the need for better neighborhood connectivity and the need to include safer streets in our planning process,” she explained.

But what about the “bicycle people,” who may wonder if the new name describes an organization that is still working on their behalf? Brown said people who use bikes for transportation or recreation (or both) needn’t worry.

“We are not abandoning our efforts to our city safer and friendlier for people who ride bikes, whether they are doing so by choice or out of necessity. Our belief that bicycles make Savannah better is undiminished,” she said, referencing a message often included in SBC’s promotional efforts.

That means events like the popular Moonlight Garden Ride fundraiser, which attracts hundreds of participants every October, will roll on as will smaller, more casual rides held throughout the year.

The same goes for the New Standard Cycles program, which provides refurbished bicycles — along with lights, helmets, and locks — for free to people in need. The program takes its name from the former Standard Oil gas station on the corner of Lincoln and Henry streets, from which Bike Walk Savannah will continue to operate.

In addition to working with residents to use the “Ardsley in Motion” model in other areas to gauge baseline walkability and find opportunities for improvement, Brown said she’s interested in helping to organize and support neighborhood walking groups.

She will be on the lookout for opportunities to work with the running community to build support for multiuse trails and paths, as well, since they benefit runners as much as people who ride bikes.

“The name change is really just reflecting what we’ve been all along: a group that is focused on making Savannah safer, more accessible, and more connected for people of all ages and abilities, no matter their mode of transportation,” Brown said.