ON ANY given Sunday morning across Savannah, you’ll find dozens of pastors leaving their homes in gated communities or influential neighborhoods to travel to pretty church buildings owned by their congregations or denominations.

They will preach to audiences largely made up of well-dressed people with checkbooks in hand and ready to tithe.

At the same time, you’ll find a pastor, lovingly known as “Rev. Kev” by his congregation, in Savannah’s homeless Camp 3 off Old Louisville Road.

Rev. Kevin Veitinger leads this church without a building, called The Community of St. Joseph. 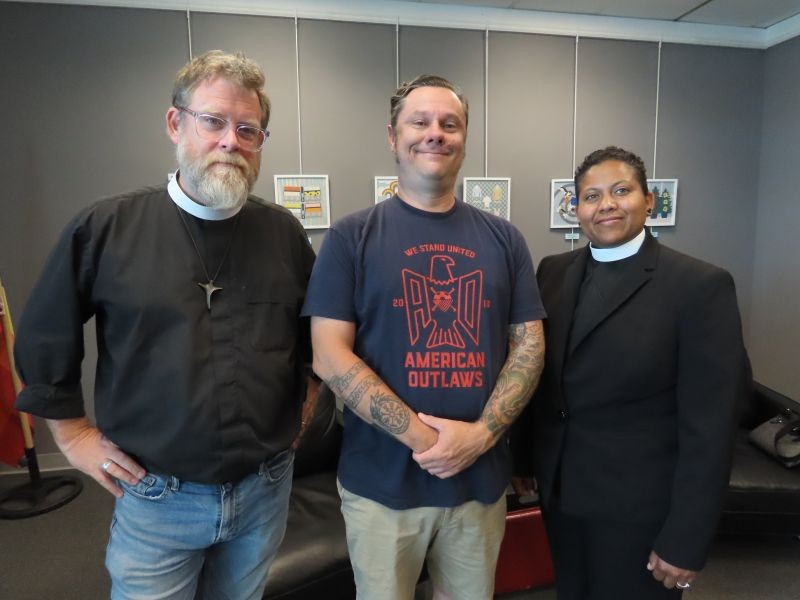 According to the Chatham-Savannah Authority for the Homeless, there are 4,200 people homeless citizens in Savannah, many of whom reside in one of 26 different outdoor homeless encampments.

Father Michael Chaney is also the pastor of a church without a building. Church of the Epiphany, which is currently meeting on Sunday mornings at the Savannah LGBT Center on Bull Street, also serves our homeless population.

Pastor Candace Hardnett leads the non-denominational congregation of Agape Empowerment Ministries currently renting space on Telfair Road. Agape has a team of parishioners who work regularly in the homeless camps.

The reasons for homelessness are as diverse as the population itself, but some of the reasons include illness, divorce, inability to receive aid, and loss of job.

Father Chaney recalls one of the first times he really got to know a homeless person. The Padre was having a difficult time adding up the numbers from a car wash when a gentleman approached him and did the accounting in a few blinks.

The homeless man who helped Chaney held a Master’s in economics from a prestigious university, but after he lost his job and spent his retirement, he ended up living on the streets.

Rev. Veitinger echoed, “We are all going to hit a hard time in our lives, but those of us with family and friends have a safety net to fall back on. The people we are dealing with don’t have that. It could be from mental illness, addiction, burning bridges, or it could just simply be you don’t have any family or their family has rejected them.”

“I’m not saying that every church needs to be a church in the field that only works with homelessness, but it is problematic not to be working with people on the margins in some way.”

“It is spelled out easy in the scripture from the Old Testament built into the law that when you are harvesting your fields, you are to leave some in the field for those who are homeless and hungry to glean from, to in the New Testament Jesus saying what you have done to the least of these you have done to me,” Hardnett says.

“Jesus himself did not spread a gospel until he had taken care of the needs of the people.”

Chaney emphasizes, “At the core of any faith tradition we find a prophetic call to justice. That includes economic justice and social justice. Justice is what calls us to reach out to our brothers and sisters who are in need–and if you think about it, Jesus was homeless himself.”

“There is a difference. Charity is not the same as understanding what is truly happening in our community with our neighbors—we have to look at everyone as our neighbor,” explains Chaney.

“Understanding literally means to stand under someone, to humble oneself, and when you stand under someone and you humble yourself, you get to see where they are from their point of view. We need more of that in churches. Too often churches can be an emotional feel good fix on a Sunday morning that fails to drive our hearts into a spiritual place where we feel connected with all creation and that includes everyone and every living thing,” he says.

Veitinger says, “When we are really jiving with the Father, Son, and Holy Spirit, we are joyful, loving, peaceful, compassionate, patient, and all of those things, that becomes very apparent –people’s bullshit meter is real and our folks know the people that are there that really care about them, and the people that are there for whatever weird internal psychological thing that they are working on.”

Chaney’s non-homeless parishioners “rely more on people power and boots-on-the-ground. We have folks in our congregation who are collecting clothes to give to Kevin’s clothing closet,” he says.

“We collect books to go around and fill up the little free libraries in town; there is a little library at the Community of St. Joseph, and we have to make sure that thing is filled up so there is reading material,” Chaney says.

Church of the Epiphany currently meets Sundays at 11 a.m. at the Savannah LGBT Center, and all are welcome.

Want to know what you can do to help our homeless neighbors? “Come out on a Sunday and see what is happening. Inevitably they come out on Sunday and they see things where they can jump in,” Veitinger says.

You can go to the Facebook page of The Community of St. Joseph to find exact directions— they meet outdoors at 8 a.m. for breakfast and 9 a.m. for service—but you might want to bring your own chair.

Chaney, who occasionally subs for Rev. Kev and regularly joins him for Eucharistic services says, “I invite people out to the service all of the time and people can’t wait to have people present for the service. A lot of people say, ‘Oh, I don’t want to invade their privacy.’ Well, it is a church service; everyone is allowed to attend.”

If you aren’t able to attend a service, you can drop off donations at Emmaus House or the Episcopal Diocese office.

“Ask a homeless person what they need,” says Hardnett.

Her congregation goes into homeless camps on a regular basis to ask and assess what they need. They collect items such as non-perishable food, water, bug spray, toiletries, hygiene products, and other necessities.

In addition to dropping off at Agape Empowerment Ministries (Sunday service at 10 a.m. and Wednesday Bible Study at 6:30 p.m.), they have a partnership with the U-Haul at 8810 Abercorn where you can drop off donations seven days a week.

“What we do is a drop in the bucket,” Veitinger says.

“It would take 20 groups of churches like this to deal with the entirety of the homeless population.”