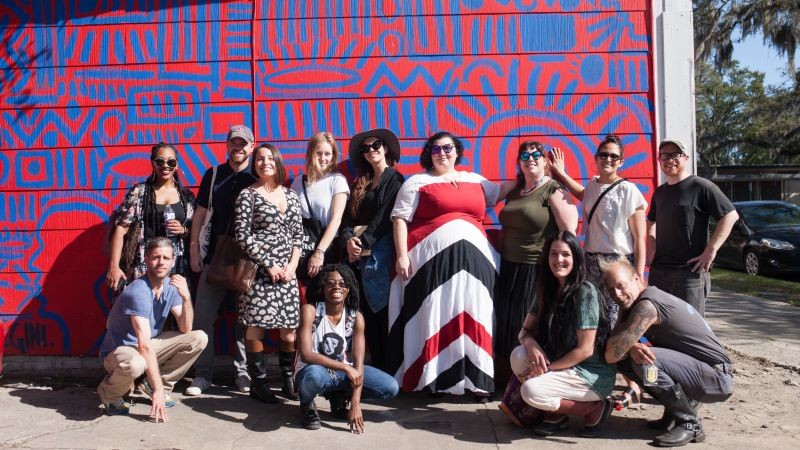 At the end of this creative week, each artist will host an event highlighting their work. The week closes out with Ruckus and Revelry, an evening in Starland featuring three-minute talks from the artists in residence, live performances, a site-specific installation by local artist Samantha Delaney, and local food and drinks.

“I was incredibly lucky,” Elison reminisces. “It takes so much for a debut novel to get around. I figured it would sell 40 copies and disappear.”

The Book of the Unnamed Midwife is a post-apocalyptic novel with a midwife as its hero. Elison, a fan of the genre, was frustrated with its male domination.

“I love post-apocalyptic fiction, but almost all of them are written by men, and it has a masculine point of view, which is quite striking,” Elison explains. “There are only a handful of deviations from that—The Handmaid’s Tale, Children of the Dust. There’s this whole idea of the story that wasn’t told. A lot of people who are drawn to extreme circumstances are conditioned to think about masculine environments. Boy Scouts learn how to survive in the woods, and Girl Scouts don’t. I mention in my story that the midwife has to look for birth control and tampons. I hate that that’s never mentioned!”

Elison met Perry at a writing workshop at Berkeley, and when Perry brought up Hestia, she was hooked.

“Everyone said that Savannah is such an artsy city,” Elison says. “I was in Oakland, which is an incredible arts and music scene. I love getting out of my own space, and I don’t get many opportunities to come to the South.”

Elison’s reading at the Book Lady will feature a Q&A session about inclusivity.

“I want to open up a Q&A talk about the way all the nonfiction is changing to include diverse voices,” she enthuses. “More women are publishing now, more people of color. I want to talk about how much richer things are when there are more voices.”

Fresh out of grad school, Alexandria Hall has more time to devote to her musical project, Beth Head.

“I used to play under a band called Tooth Ache, but I felt boxed in by what I had made of that project,” Hall explains. “I decided to kill that project and start something new. My urge with Beth Head is to follow whatever I’m feeling.”

“I feel like getting out of your space is important, but as a musician, so is getting out of my gear and using other equipment. I’m excited to play on different instruments and experiment with different sounds. I want this week to be really playful.”

Hall’s MFA thesis was on finding a sense of place and how home is entwined in that definition, so taking part in a nomadic residency was a natural choice.

“I love traveling, and I’ve realized that a lot of it is about being able to tune into what I need in a given place,” she explains. “I wrote about Vermont and the way my family talks, and I wrote about that before, but once I got to New York, I was like, ‘Vermont is in my brain.’ I had the distance from it. When I was in Berlin, I was trying to write a little bit about Berlin, but when you’re traveling, you’re getting away from somewhere else.”

In addition to performing at Sulfur Studios, Hall will host a poetry workshop at the Juliette Gordon Low Birthplace.

“My poetry is not super narrative, though in the project I’ve been working on, there’s some bit of narrative, though that’s deteriorating more and more,” Hall says. “I’m interested in the sound of the language.”

The Diamond Oaks Treehouse is a quirky enclave tucked away on Thunderbolt Island. Its owner, Chad Faries, joined Hestia as a host.

“CC was doing a project for Airbnb and had contacted me about some work exchange,” recalls Faries, who lives next door to his partner and fellow Hestia host, Margaret Emily Jones. Hall stayed in his treehouse, while Jones hosted Byers.

“We do this not just because we want to make money off short-term vacation rentals, but because we are artists ourselves,” he says. “I’m a creative writer. I like to foster these spaces that create space and make people feel like they want to be artistic.”

“These places are more inspiring. Nothing against Starland or the Historic District, but down there, cute Airbnbs are a dime a dozen. I’m the number one Airbnb in Savannah—people just find it really personal.”