WAY BACK before 9/11 — it seems so long ago now — Garrett Eaton joined the Marine Corps.

By 2002, with the U.S. at war in Afghanistan, he served a tour of duty there in a forward air control squadron.

And like so many veterans of our era, he came back a changed man – broken, even.

“I came back with PTSD that I tried to fix with alcohol and drugs,” Eaton tells us. “Some opioids, but I found out the anti-psychotic meds were really the bad thing. But mostly I was an alcoholic.”

Eaton is the subject of Return from Desolation, a short film screening as part of this weekend’s Mountainfilm On Tour Savanah event, held this Thursday at Service Brewing Co.

The film focuses on Eaton’s recovery, and on his work as a river guide helping veterans recover from war by the simple act of whitewater rafting in the mountain West, through the Desolation Canyon area of Utah’s Green River.

“I was back from Afghanistan and wanted to take my oldest daughter, who was seven at the time, on a rafting trip. My wife was like, ‘Well, you’re going sober. You’re not taking her down the river with a bunch of your drinking buddies,’” he recalls.

“And that was my first sober trip down the river. I don’t know if you’d necessarily call it an epiphany, but that was the moment I always look back on as when things began to change for the better.”

These days, Eaton works with the group OARS and the Sierra Club to take about four long rafting trips a year in Utah, dedicated solely to veterans. Usually in parties of about 25, spread across a half dozen rafts, the expeditions focus on purely on the experience out in the wild.

No other form of therapy is attempted, or needed, during the trips, Eaton says.

“We’ve found what works best is just the river stuff,” he says. “It’s incredible to see a guy who’s spent the last three years of his life in a basement hooked on opioids go down a Class III rapid and then start crying his eyes out.”

Eaton says the level of PTSD experienced “depends on what each guy went through, but even just being in theatre can be enough to get PTSD,” he says.

“We got it just being camped out in the mountains for a long time, doing forward air control. But I’ve talked to a lot of the guys who fought at Fallujah, and a lot of them are just barely getting by.”

Now 38 years old and a father of four, Eaton is a senior member of what’s now a multi-generational cohort with combat experience in Afghanistan and Iraq. 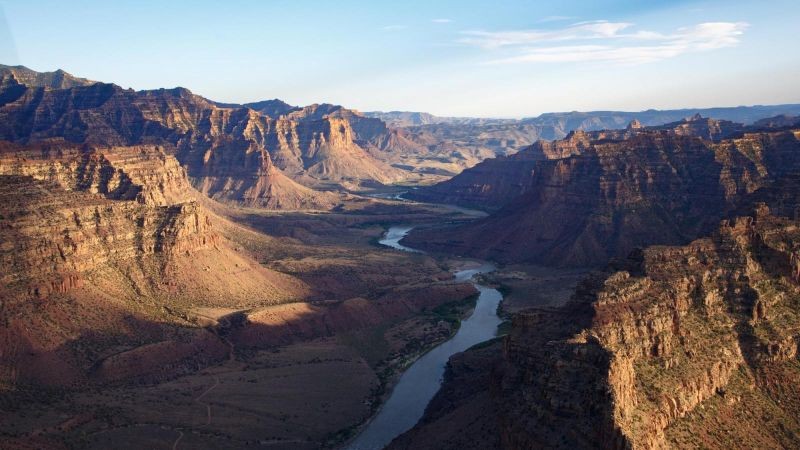 “I fought in Afghanistan when I was 22. I cut short my tour to come back for my daughter’s birth. She’s now a junior in high school, and the same war’s still going on.”

Eaton says the unending and vague nature of America’s Middle East wars makes it “hard to find the good in it. And that messes with how you process it.”

World War II veterans, Eaton says, “came back with a ton of PTSD themselves, but they also came back with a sense of victory, that it had all been for a good cause. They had V-E Day and V-J Day to mark the fact that it wasn’t all for nothing.”

The evening also features two other documentaries. Fear Us Women is about Hanna Bohman, a Canadian woman who went to Syria to fight Isis as a volunteer soldier with YPJ, an all female Kurdish army. Adventure Not War is about Iraq War veteran and PTSD sufferer Stacy Bare’s return to Iraq to make a ski movie.

Return from Desolation also focuses on Eaton’s unusual double life as a man working the North Dakota oil fields while at the same time spreading a message of environmental conservation.

“I began working on oil rigs when I was 17. That’s what you did, living in that type of small town,” he says. “I joined the Marines, back before 9/11, mostly to get out of town. Then when I came back, I basically went back to the same job, and began working my way up the ladder.”

What is the reaction like when people find out what he does for a living?

“That depends on where I’m at, where we’re showing the film. In some places, they’re like, what? If someone is super environmentally conscious, I’ll explain that the oil companies aren’t really trying to murder the environment. Almost everything that we use is based somehow on petroleum products. Until something else comes along, whis is what we have,” he says.

“It opens a dialogue, which is really important in a time when each side basically thinks the other side is totally evil,” he says. “When we’re all pretty much the same.”

Thursday, Nov. 8, Service Brewing Company. Social hour 5:30 p.m., program begins 6:30 p.m. Screening includes three documentary shorts: Fear Us Women, Return from Desolation and Adventure Not War. Hanna Bohman, the subject of Fear Us Women, and Katie Katz, a producer of the film, will join for a question and answer session following their film. Garrett Eaton, the subject of Return from Desolation, will also participate in a Q & A session after his film screening.

Free to all veterans. General admission $15.