PERHAPS IT'S the Real Housewives-esque schadenfreude that comes from seeing society ladies fall from grace. Or maybe it's just our infatuation with hoarders.

Whatever the cultural root, there’s something about the saga of aristocrats Edith Ewing Bouvier Beale and her daughter, Edith Bouvier Beale, that continues to fascinate.

Known as “Big Edie” and “Little Edie,” this quirky pair of New York bluebloods once enjoyed the highfalutin Manhattan high life of the 1950s, attending parties and entertaining suitors. Decades later, they were discovered living among stray cats and fetid squalor in their decaying Long Island estate, Grey Gardens. 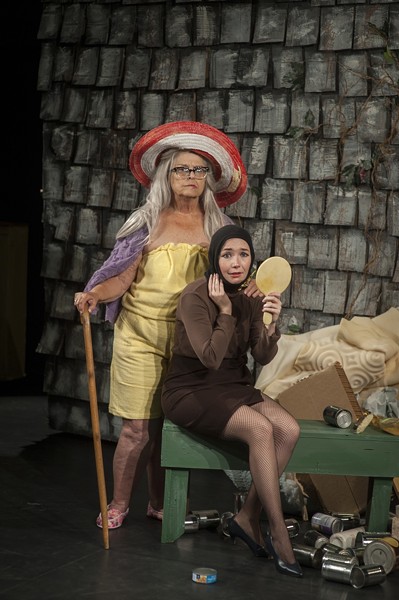 First captured in David and Albert Maysles’ 1975 documentary of the same name, the fact that these charming, tragic eccentrics were close cousins of former First Lady Jacqueline Bouvier Kennedy Onassis only served to embroider their legend.

The film inspired a Broadway musical, nominated for 10 Tonys in 2007 and winning three, including Best Actress awards for leads Christine Ebersole and Mary Louise Wilson as well as Best Costume Design. Deliciously campy with surprising emotional depth, the musical examines social constructs about class and the mother/daughter dynamic while giving plenty of opportunity for the audience to tap its toes. (Another film, sans singing and starring Drew Barrymore and Jessica Lange, was released by HBO in 2009.)

“It’s going to appeal to people who like musicals and to people who don’t,” he says. “It’s a perfect play about what you’ve accomplished in life and what you haven’t.”

Connect sat down with these Savannah stage veterans to discuss the enduring adoration of Grey Gardens, the Kennedy connection and the importance of being Edie.

Have you been coveting these plumb female roles for a while?

Mickey Dodge: I've wanted to do this show for six, seven years. I saw the documentary when it first came out and the newer film with Jessica Lange. Then I saw that there was an award-winning Broadway musical where an older woman won a Tony! So I'm amazed that I've been asked to play Big Edie and that I've still got the pipes to do it.

Maggie Hart: [to Dodge] Yes, you do! With your character, the range is so wide.

There are moments where we’re down in the low tones, and then suddenly we’re trilling up the higher ranges for the high society days. Vocally, this show is really challenging.

MH: Well, it's been quite a journey because I've been focusing on two different women. I observe Mickey a lot, because I play her in the first act. So I notice what characteristics she has and concentrate on how to keep the through line.

Then I have to observe Mary Caitlin, so I can bring her Little Edie into the second act. I’m trying to have two separate brains here.

As always with any Collective Face production, there’s careful attention paid to matching the set and costumes to the period, in this case both the 1950s and the 1970s.

MH: Well, the clothing is so much a part of the characters, and David [Poole] insists on being as genuine as possible. Costume designer Chan Givens has helped him source all these items, and almost everything every character wears is as authentic from the era.

MD: [nodding enthusiastically] David is amazing about what he can find online. Joe Kennedy wears an actual "swimming outfit" from the 50s. It's gorgeous.

One of Little Edie's shining moments in the second act is her song about her "revolutionary costume." What revolution is she dressing for?

MH: Well, first, she's revolting against her mother...[conspiratorially] "mother wanted me to wear a kimono..."

Then we get into the people living in the Hamptons at this time. The polo riders, the topsiders, the khakis—she's rebelling against the conformity of society.

It’s also about Little Edie’s delusion, I think. She talks about how she would have decorated the White House if she and Joe Kennedy had gotten married.

The documentary came out in the 70s, and both of these women are long dead. Why do we continue to adore them?

MD: In my mind, they echo that little bit of madness that's in all us. Also, being an older mother of grown daughters, I understand the conflicts and yet, the dedication to each other. I think that resonates with people.

And of course the Kennedy connection will always fascinate people.

MH: David told us from the beginning, "these women live theatrically." And what fun that is, to just live... [singing] to have your cake, and eat it too!

So even though they’re kind of tragic, they are full of joy, and I think that’s why people just love these women. They’re just so unapologetically eccentric.

But there’s this element of repulsion there, too. I mean, these ladies are the first famous hoarders. Was there anything about them that was just too much?

MH: [wrinkling her nose] And the paté. Which was really cat food...

MD: ...and just the idea that this glorious house fell into such disrepair ... I can't even watch Hoarders on TV, it's so chilling. But that's the way these women lived. There were times when they didn't have running water or electricity.

MH: [shivers] One room would fill up with garbage and they'd move to the next one.

So what can we learn from the Edies?

MD: The love between these two women is unbelievably strong. They've sacrificed for each other. So we learn how damaging how love can be and how uplifting at the same time.

MD: [shrugs thoughtfully] I don't know, there might be others out there. I just don't want to know them.