IT BECAME TRUE the moment a crew from Angco Striping reached the south end of Price Street, but a ribbon-cutting ceremony on Aug. 31 made it official:

Savannah has more miles of green bike lanes than any city in Georgia.

“That’s certainly the most in the state, even including Atlanta. Athens has some green bike lanes in conflict zones but not continuous green lanes of any significant length like Savannah,” said Elliott Caldwell, executive director of Georgia Bikes.

“The University of Georgia has done some green bike lanes on their campus roadways, but only for short lengths in heavily trafficked areas.” 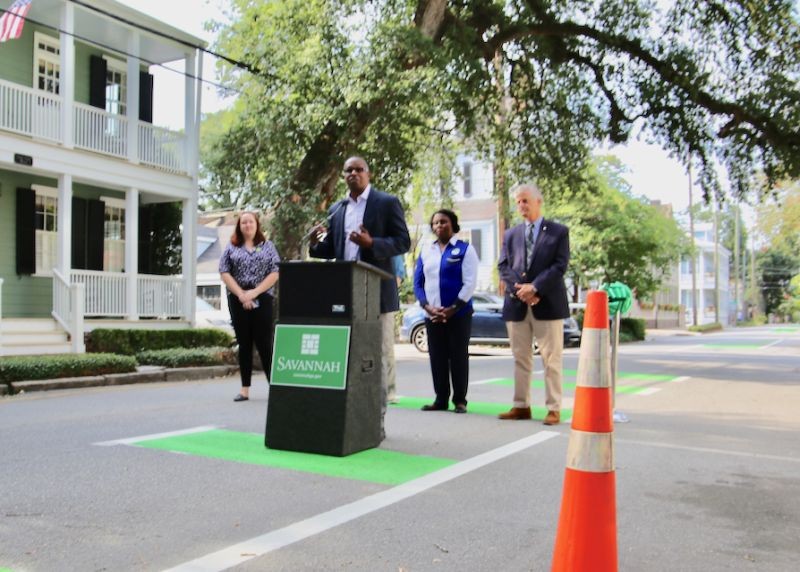 The National Association of City Transportation Officials lists numerous benefits of green bike lanes in its Urban Bikeway Design Guide, noting the green color “increases the visibility of the facility, identifies potential areas of conflict, and reinforces priority to bicyclists in conflict areas.”

The green color should drastically reduce the number of motorists who fail to recognize it as a bike lane and try to drive in it, a scenario that was shockingly common on Price Street.

Some folks in Savannah have objected to the green color and have even suggested it was chosen randomly by city officials. That’s not the case as NACTO specifies the green color in its design guidance “to minimize confusion with other standard traffic control markings.”

At the ribbon-cutting ceremony, Savannah Mayor Eddie DeLoach linked the bike lanes to the “Savannah Forward” strategic plan. During the summer of 2017, Savannah Forward public meetings were held in every aldermanic district and citizens rose again and again to plead for more mobility options and safer streets.

Mobility and Parking Services Director Sean Brandon said the green bike lanes, which were funded by parking fees, are tangible evidence of a philosophy that’s been adopted by his department and the city as a whole.

“We want to give everyone the ability to get in and out of downtown, midtown, or wherever you’re going by whatever means of transportation you want or need to use.”

“The more comfortable it becomes, the more people use it,” he said.

Brandon’s claim is supported by a Portland State University study published in 2012, which has been replicated in other cities numerous times since then. “Four Types of Cyclists? Testing a Typology to Better Understand Bicycling Behavior and Potential” found that some 60 percent of people are “interested but concerned” about traveling by bike.

In other words, they would ride their bikes more often, if they weren’t as worried about being hit by drivers.

“Bicycle infrastructure that increases their physical separation from motor vehicles, such as cycle tracks, increases their level of comfort significantly. This would seem a necessary condition to increasing their levels of cycling for transportation,” the study’s authors wrote.

And while Brandon is correct in stating that more people riding bikes creates more parking opportunities for people who drive, that’s not the only benefit motorists derive from better bike facilities.

A study published this year used 13 years of data from 12 cities and found “evidence that high-bicycling-mode-share cities are not only safer for bicyclists but for all road users” and that improved safety is “associated with a greater prevalence of bike facilities – particularly protected and separated bike facilities.”

Brandon mentioned protected bike lanes in his remarks, but none have yet been installed in Savannah. Though it wouldn’t take much for the city to be a state leader in this area, as it is now with green bike lanes.