free for kids 12 and under

IT's BEEN eight years since Savannah resident, musician, designer, and artist Jason Statts and Dave Williams were shot on an Ardsley Park lawn. While unloading gear after their first show as sürt {the destroyer}, the friends were shot by two young men.

Dave lost a vocal cord in the attack, and the bullet passed through Statts’ neck, causing irreparable damage to his spinal column. Statts is now quadriplegic with partial use of his arms and is unable to work. Though he receives care through government assistance, the Savannahian’s bills exceed his stipends. To contribute to Statts’ quality of life and help out with costs, Friends of Statts was founded. A group of Statts’ nearest and dearest, the organization throws an annual party and fundraiser, Statts Fest, to raise funds and celebrate community—and this year, the party’s bigger than ever.

With the exception of one year at Muse Arts Warehouse, Statts Fest has always taken place at The Jinx. As the organization continues to grow, Statts Fest seeks to mix it up and expand their audience. 2016’s fun will go down at Grayson Stadium, the home of our beloved Savannah Bananas. 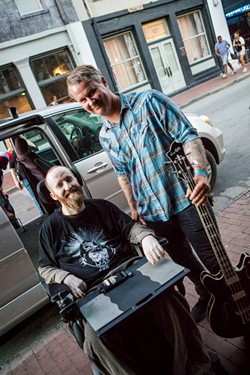 “When the Bananas first moved here, it seemed to be a good option,” explains Friends of Statts’ Emily Doherty. “We reached out to them in early spring, asking about the possibility. Their vision for the stadium is to have year-round events going on, and this is a good event—it supports a local cause and great local individual.”

The Coastal Plains League team celebrated an incredible inaugural season, wrapping up in August with a championship. Don’t expect quiet to fall upon hallowed Grayson Stadium, though—Statts Fest is the first of many events to be held in the historic arena.

“We’re excited to kick off the fall at Grayson Stadium with Statts Fest,” Bananas President Jared Orton remarks. “We already have a mix of private and public events on the calendar, and this will be a great event to help raise money with Friends of Statts. We really want Grayson Stadium to be a centerpiece of the community and we’re looking forward to using it as a place where all of Savannah can get together!”

Statts Fest will be a celebration of music, entertainment, food, friends, neighbors, art, and wellness. This year’s festivities include plenty of activities for kids.

“Most of Jason’s friends now have kids, and having a nighttime bar event limited potential attendees,” Doherty explains. “We want to make it more family-friendly.”

The Jinx hosted Pre-Statts Fest a few weeks back, with heavier bands like Black Tusk taking the stage for a 21+ crowd.

At Grayson Stadium, there’s engaging entertainment for all. U.S. Fish and Wildlife Service will host a tent and a petting zoo so kids can get to know some Georgia-native critters. Starlandia Creative Supply has dreamed up a “beard station” where kids can create their own versions of Statts’ iconic facial hair. 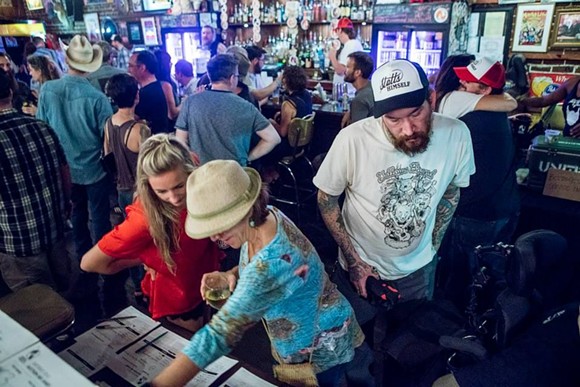 The Statts Fest auction features wares from a variety of local artists and businesses.

Kids can make their own LEGO monoprint at Scribble Art Studio’s station. Over at the Savannah Children’s Museum tent, there’s a place for children to relax, wind down, and hear a story read aloud. Savannah’s youth can even stretch it out with two yoga sessions—one at 2 p.m., another at 3 p.m.

Want to turn up the energy? Flow troupe Stardust Pixies will be hula hooping on the field while Savannah Junior Derbytaunts race around the bases.

Live music is at the heart of Statts Fest, and this year boasts a range of local talent.

The Statts Fest auction has turned into a legendary affair featuring some of the hottest items from local makers and businesses. 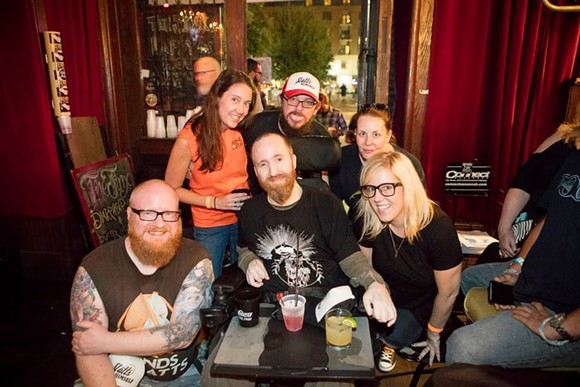 Statts and friends at a previous Statts Fest.

Friends of Statts hopes that this year’s festivities will be the start of a year-round fundraising event calendar.

“The more money we can raise, the better. We figured we could reach our biggest demographic at something like this and be more community-based.”

Doherty hopes the event allows people to learn more about one of Savannah’s radiant citizens and inspires them to give back.

“The more people learn about Jason, they become engaged,” Doherty shares. “I think it’s always important to keep in the front of your mind. It’s easy to come to an event every year, donate money, buy a ticket. But his medical needs continue to go on. In the future, we’re looking to have smaller events throughout the year.”

Grunge on a Roll:

It all began with a TV

Cheating Alethia will set you up

Grunge on a Roll:

Expand your circle of friends with Savannah Jazz

Raya and the Last Dragon