On a chilly Thursday morning, it’s warm inside Kobo Gallery. Danielle Hughes is boxing a pair of her earrings for a customer, and Dicky Stone is recording the sale in the log.

The earrings Hughes just sold are made out of street sweeper bristles, which Stone can’t believe he’s never seen in their natural habitat before.

“I was born and raised here, I have watched street sweepers sweep these streets my entire life, not looking down on the street,” he says. “Danielle is from Asheville, North Carolina, and she gets here and she looks down at the street and she sees these things in the streets?”

“I see them everywhere!” laughs Hughes.

They compare their own origin stories of Hughes’ street sweeper collection, with Stone refusing to concede his.

“One of the things that really is fun is when you work in the gallery, you get a chance to talk about not just yourself, but all of the other artists,” says Stone, “and you get to then sell the other artists’ work. That can be a hoot. And since they’re not here, you can say whatever you want!” 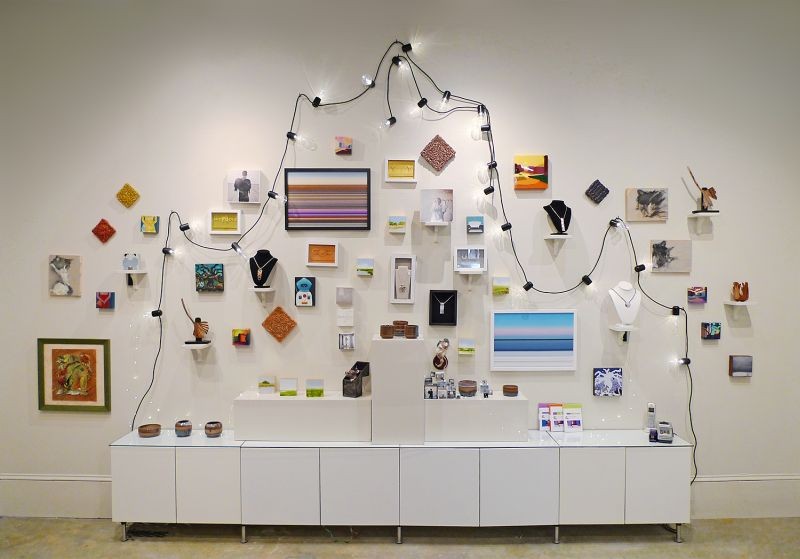 “We operate democratically,” says Stone. “We have monthly meetings where we discuss whatever business is going on. We divide the responsibilities for running the gallery into different committees, so like PR, maintenance, finance, all the different things that go into making the gallery operate, we share the work.”

Kobo has functioned this way since 2007, when jeweler Heather Lindsey Stewart was running her studio out of what’s now the front half of the gallery. She, along with Kristi Jilson, Christi Reiterman, and Rachael Ormond, formed a co-op in the spring. Stone was a member by the summer.

“I’m the oldest surviving member,” says Stone. “The others got involved in other things and they dropped out, and eventually I joined Heather in the LLC to help run the gallery.”

Now, Stone and Pagratis serve as business partners in the LLC together.

Through the years, Kobo has seen about 50 artists come and go, though Stone notes that they never really leave.

“We consider ourselves family,” he says. “Past or present members, they’re still part of the Kobo family. So when we look at someone, we make sure they’re someone who might offer a skill set we need or, more importantly, can they get along with everybody else?”

“You need to be able to sit in here, too, and interact with people,” joins Hughes.

The selection process to get into Kobo is very selective; Stone says there’s usually a waiting list. Space is limited in the gallery, and the artists are not always willing to [[expand]]

“The most important thing is to get as much money as we can back into the hands of the artists,” says Stone. “Part of the deal is that we want to protect those of us who are in the family. It would be unfair to Danielle to pull in two more jewelers; it might be good for the co-op, but it would not necessarily be good for all of us.”

“There’s a particular style we look for,” says Stone. “You can see a lot of our art is more abstract, more impressionistic, more modern.”

“I feel like we are geared towards people who are looking for artwork instead of just tourists trying to pick something up,” adds Hughes. “It’s a slightly different market.”

Kobo is located on Ellis Square, placing it solidly in tourist territory, and Stone estimates that 95% of their business comes from out of town. However, Hughes’ sale of her street sweeper earrings was to a local who owns a business just down the street.

“We definitely get a lot of tourists, but I always feel like this time of year, you’ll see those people who come in here for their Christmas gifts,” says Hughes. “They may not be in here all the time like our tourist customers, but they consistently come in here to get gifts.”

Speaking of Christmas gifts, if you’re in the market, Kobo’s holiday tradition might be the right opportunity for you.

For about six years now, Kobo’s artists have sold holiday ornaments to benefit a charity. This year, in addition to that sale that benefits EmployAbility, they’re trying something new: Generositree.

The back wall of the gallery is set up with art from all Kobo’s artist. Each piece is priced at $300 or under, and a portion of those proceeds are, fittingly, going to the Savannah Tree Foundation.

The sale goes on through the end of the year, so there’s plenty of time to swing through and pick up something, from Kobo’s family to yours.