She took to the road—years as a solo performer, then with a band—playing a loop from Nashville to Memphis, Little Rock, Fayetteville, Springfield, Louisville, parts in between and back to Music City.

Song by song, honky-tonk to honky-tonk, McBryde earned her music cred, building a loyal following among dive and trucker bars deep in the buckle of the Bible belt.

In spring 2017 when Church invited her onstage to sing an acoustic cover of her song “Bible and a .44”—a YouTube video of that performance now has a million and a half views and growing—McBryde’s career went into overdrive, affirming her as one talented, whiskey-drinking badass.

Film Biz Recycling, led by up-cycling entrepreneur, Samita Wolfe, takes in props and set pieces from movie productions in Savannah and then rents them to other productions or connects the items to charities or individuals in the community.

Film Biz’s mission hits close to home with McBryde who grew up on a farm with seven siblings in rural Arkansas. Though the family always made do, she knows the art of stretching things to make them last.

A few years ago at a friend’s dinner in Nashville, McBryde met Wolfe and was taken with her idea to repurpose and reuse discarded production pieces.

“Last year, Samita got like 1000 Christmas trees,” recalls McBryde, “and instead of them going into the garbage and landfill, Film Biz got the trees to families that couldn’t afford them.”

Indeed, in December 2017 the Disney Company contacted Wolfe in Savannah. They had a large number of Christmas trees and wondered if Film Biz Recycling could use them.

“It didn’t make sense for Film Biz to hold onto 1,000 Christmas trees,” says Wolfe, “so we partnered with Molly Lieberman of Loop it Up Savannah who helped us share the trees in the community.”

It all struck a chord with McBryde, “When Film Biz was interested in doing a fundraiser of course I was in.” 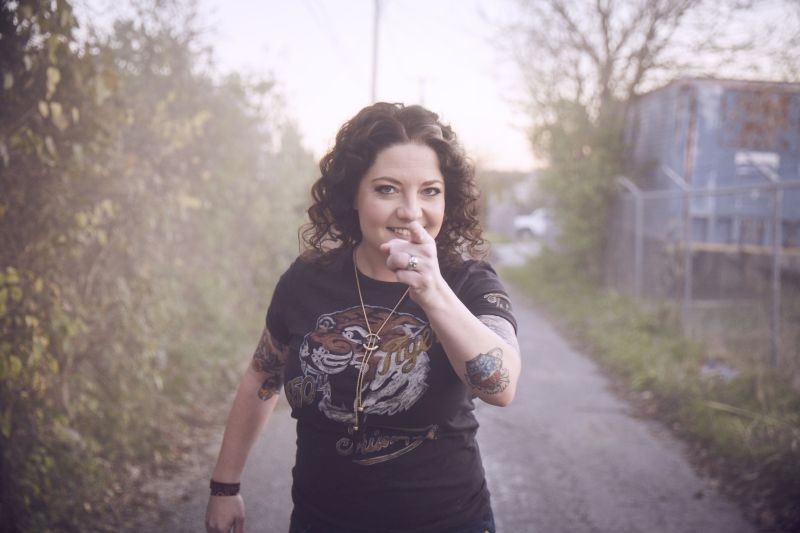 “I love gigs like these,” says McBryde, “intimate and up front with the audience. I’ll play the hits [laughs] and if people have songs they want to hear, I’ll be Ms. Juke box, too.”

Being Ms. Juke Box is something McBryde also knows well. Years of solo touring burned more than 250 songs into her memory.

“I used to have an iPad with just a list of song titles, and back then some nights I’d randomly scroll one after another.”

This encyclopedic knowledge and recall became a powerful nexus of connection between her and a wide range of people, making it so she could walk in, play and win over most any room.

“I had a strategy,” says McBryde, “I’d start out it with “Aimee,” see who was responding, play a little Warren Haynes then follow with Turnpike Troubadours. How people reacted told me how I was going to play the room. And requests. Always requests.”

One tour took her to Rome, Georgia, where a guy walked up to the stage. “He plunks down $60 and wants to hear Lorrie Morgan,” recalls McBryde, “I had his Lorrie Morgan and played four of her songs!”

McBryde writes from the deeply personal with characters crafted of gritty, blue-collar saints and sinners, moments decanted from fraught edges of emotion. Her songs are working class gospel sung from a heart torn wide open.

McBryde’s title track “Girl Going Nowhere” flows from a high school algebra teacher cautioning her not to pursue music, that she wasn’t likely to succeed and could just ‘tell us all about it when she came crawling back.’

“I am very grateful,” says McBryde, “there are so many talented people writing and performing, and I’m lucky to be one of them. I am lucky. But that teacher? I hope she listens to the radio a lot [laughs]. She knows what crow tastes like now.”

McBryde is the underdog’s underdog—the not-from-money small town girl who got out and made good. In part she’s so captivating because she isn’t like all the other country acts—McBryde, her music and story genuinely appeal to a demographic of people who don’t readily see themselves in the images and lyrics of Miranda Lambert, Kasey Musgraves or Florida Georgia Line.

“I believe if you write well, perform well, and sell your merch, you will succeed,” emphasizes McBryde, “with the band and working new song we have two questions: Do we like it? Do we believe it? If we like it and believe it, the audience will believe us. And I want to relate [laughs]. At the end of a show, I just want people to want to have a beer with me.”

An Evening with Ashley McBryde, a Benefit for Film Biz Recycling

$30 www.brownpapertickets.com and at door