"ARE you full?" Todd Carvell, owner and partner of FULL, inquires immediately after my meal.

On July 15, the Historic District welcomed a new lunch and late night joint that sits snugly behind Sweet Melissa’s on Whitaker Street. With a gas gauge icon representing the basic concept of coming in empty and leaving full, FULL offers more than just hearty portion sizes. 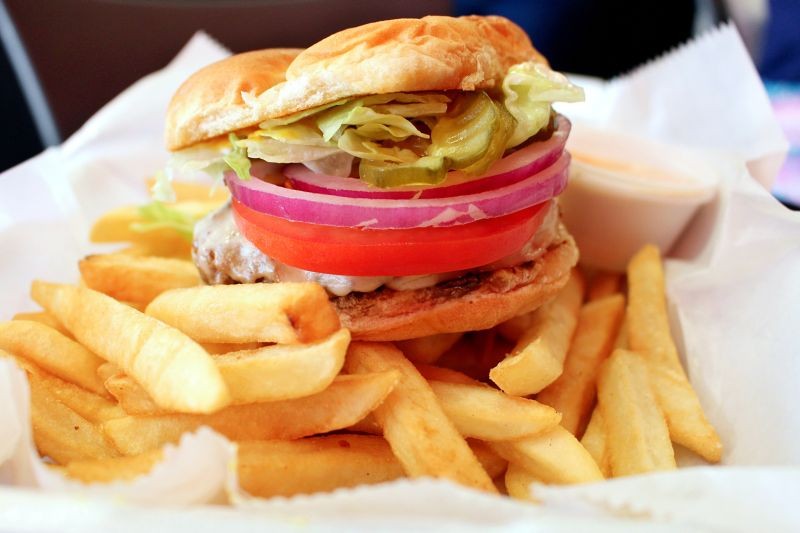 However, this isn’t the average greasy, sloppy, late-night grub that will merely suffice due to an intoxicated craving. Carvell and partners Mark Luft and Michael Clark sought to integrate Louisiana cuisine with Southern comfort classics, making their lunch and late-night menus stand out in the Savannah food scene.

FULL is the epitome of a hole in the wall, a true pint-sized nook with black trimmed crimson walls and metal diamond plate flooring. On the left side, hungry patrons stand in line at the walk-up counter as their made-to-order food sizzles on the metal flat top grill. Then on the right, a full-length black booth scales the wall, accompanying five alternating two-seater black and yellow diner-style tables.

The two pinnacle design features, both representing the driving force of the owners’ motivation to succeed, hang in the back of the establishment.

First, a memory wall of cherished photographs are on display as a reminder of what is truly important, family.

Then, on the adjacent wall, a cracked glass plaque with the hand-stitched words “served with love,” overlooks the food preparation counter. This family relic, that has been passed on from generation to generation, embodies the passion and care that goes into each meal prepared with Mama’s most powerful ingredient; love.

“Truthfully, my mom is the real reason why FULL is here,” Carvell emotionally admits.

Carvell’s heartwarming story begins in Lafayette, the heart of Louisiana, where he was born and raised. “When you came to my house, my mama’s first words were ‘have you eaten today?’ ”

Carvell reminisces about fond childhood memories, like how he and his brother would sit on the kitchen counters, rather than in front of a television.

“Everyone back home hangs out in the kitchen, that’s how we had family time.”

His deep-rooted adoration for food was ingrained at a young age. “Whether you were a boy or girl, you learned to cook.”

Imitating his mother’s kitchen process, Carvell mastered all of her secret recipes. “It was all handed down. That’s why we love food so much.”

As you can imagine, the mother and son duo’s most cherished experiences were those spent around food. When the twosome spent time in Savannah, they would dine at his mother’s favorite restaurant, The Lady and Sons.

In fact, pictures of Mama Carvell, beaming from ear to ear after feasting at Paula Deen’s restaurant, can be found on FULL’s wall of family photos. Each plate of food shared with one another amplified their mutual desire to open a restaurant together.

Nevertheless, their plans tragically came to a halt on April 9, 2012, when Carvell’s mother passed away, leaving behind her beloved family and aspiration to share her passion for food in a restaurant setting.

But the time of mourning brought healing to the former hotel manager, who mustered up the courage to take a leap and move to Savannah.

With his two new life mottos being “life is short...don’t wait” and “if you have a dream, make it happen,” Carvell devised a plan to represent his mother’s legacy in restaurant form.

His efforts were rewarded one fortuitous night six weeks before FULL’s grand opening, when their current spot on Whitaker became available. “We accidently stumbled on this space.”

This opportunity brought friends for a decade, Carvell and Clark, together with Luft, thus creating the FULL “Framily.”

The irony? FULL sits a few doors down from The Lady and Sons, serving as a constant reminder of the mother and son’s special bond.

Although FULL’s busiest time is the late night shift, often keeping them open until 4:30 A.M., it’s the lunch crowd that gets pampered with a taste of Louisiana.

From the Fish Etouffee to the Chicken and Sausage Gumbo, their mid-day menu tributes Carvell’s mother by utilizing her own made-from-scratch recipes.

Each day a special Louisiana inspired dish is prepared and served with two homemade sides, fresh bread, a handmade dessert and an ice-cold refreshment, all for only $10.

Do not hesitate to indulge in Clark’s homemade baked macaroni and cheese as a side; it is his mother’s personal recipe.

As for its contents, Clark confidently states, “Just sharp cheddar, milk and love.”

Seeing that these recipes are made with reverence, they are not served during the late night hours in order to maintain the entrée’s integrity and freshness. We can respect that logic.

If the FULL “Framily’s” homemade Louisiana recipes don’t tickle your fancy, then you have to try their grilled and fried selections that appear on both the lunch and late-night menus.

To reiterate, this is not the typical chintzy fast-food fare that is commonly available in the late night and early morning hours.

Take the FULL burger for instance. The fresh, never frozen, hand-formed burger patty is made with 50% beef and 50% pork, ground fresh every three days from the Ogeechee Meat Market. As a recipe that took three years to perfect, this burger was originally called the “Todd burger,” named after Carvell who initially made it for backyard grilling.

Additionally, FULL offers fresh chicken breast strips, marinated in a special seasoning, which are hand-battered and deep fried to order. These house-made chicken tenders ended up on the current menu after several patrons expressed a craving for wings. They are now FULL’s biggest seller. 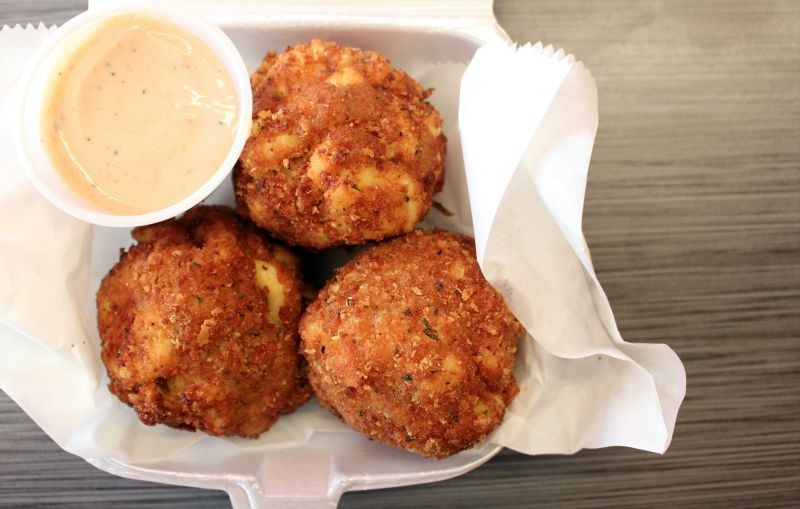 With open minds and empty stomachs, my husband and I paid Carvell a visit one balmy Saturday afternoon. Carvell and his partners were working like a well-oiled machine, hustling in and out of the kitchen, prepping Saturday’s ingredients.

First, we were served the freshly ground burger on top of a mountain of sizzling French fries. The hand formed cheeseburger had the ideal consistency, packed loosely enough to melt in your mouth, and seasoned with just enough salt to enhance the meat.

Cooked to medium-rare perfection, it was topped with spicy pepper jack cheese and freshly cut vegetables.

However, the burger did not outperform the chicken tenders, which were remarkably thick, juicy and well seasoned. The golden battered exterior contrasted with the pure white flesh, which was clearly a fresh piece of chicken breast.

Yet, the Deep Fried Spicy Mac and Cheese Balls took the cake for me. Clark’s homemade baked macaroni and cheese was formed into 8-ball sized spheres, breaded with breadcrumbs and spices and then fried to order. These golden balls of creamy decadence had a subtle spiciness that came from flecks of green chilies.

As self-proclaimed sauce zealots, we were thrilled that a small cup of “FULL sauce” accompanied each menu item.

Similar to the seasoning he uses for crawfish, Carvell sought to incorporate those flavors into his special sauce.

This tangy and creamy dip complimented everything from the French fries to the macaroni and cheese balls.

“We never thought of being a late night place,” but “we just want to feed people. We see the same faces over and over. That tells us we are doing something right.”

FULL seeks to reciprocate the community’s support by giving back and offering all downtown Savannah employees and emergency personnel a discount on meals purchased.