IT’S Service Brewing Company’s fifth anniversary, and for owners Meredith and Kevin Sutton, that means they’re about to put in a lot of work.

“Every year at our anniversary, we always have something complicated about [the beer] that takes a lot of time,” laughs Meredith. “We did 700 pounds of blueberries one year that we got from the president of the Georgia Blueberry Association. Every beer always has something that takes a little more time.”

This year, that something is homemade oat milk.

“It took us, how many hours? I felt like I was back there for an entire day making it,” recalls Meredith. “It was six huge bags of oats, over 60 buckets of oat milk.” 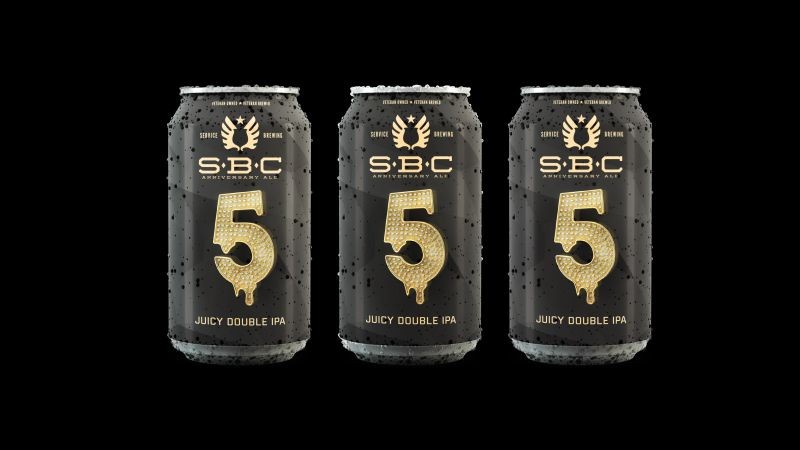 The effort is definitely worth it. The SBC5 Juicy Double IPA is a smooth beer with five hop varietals and notes of mango, citrus and pineapple—and, of course, the oat milk.

“This year, it was trying to create that soft, creamy feel, but without using lactose,” explains Meredith.

There’s also a unique story behind the five hops used in the beer.

“In the spring of 2018, we participated in Yakima Chief Hops with other veteran-owned breweries and we created the Veterans Blend,” explains Kevin. “It worked out really well. A portion of the sale of those hops goes to the Semper Fi Fund. We got into researching each hop, what kind of aromatics it provides to the beer, and we look at all those and decide how much of each hop style we put into the beer.”

The five hops—Amarillo, Idaho-7, Styrian Dragon, Mandarina Bavaria, and Zythos—are in honor of the fifth anniversary.

“We did about three or four different test batches before we decided,” says Meredith. “We also did a couple with lactose, just to see if it was a huge difference. To be honest with you, it’s kind of pointless to use dairy in a beer, except for the convenience of using it, which is more convenient than having to make 500 pounds of milk.”

For the five years it’s been open, Service has become an important community fixture and a regular stop for people who love craft beer. Meredith and Kevin attribute a large part of that success to Senate Bill 85, which was signed into law on September 1, 2017.

The law allowed breweries and distilleries to sell directly to customers, and Meredith said that the changes brought by the law were like “night and day.”

“We’ve had to retrain our staff four times in the five years we’ve been open,” says Meredith. “You’re always thinking about how you can change and be better and be creative. Now that things are a little more level, we’re more focused on other areas of the taproom and small batches, now that we can sell beer out of the taproom.” 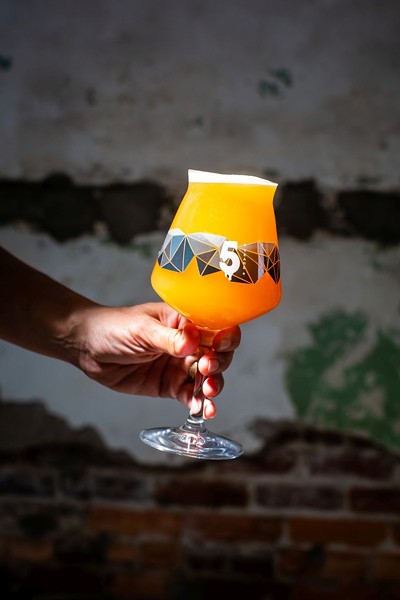 “With the law change, it also allows us to think about programming, too,” adds Kevin. “Since the change, we’ve implemented Bluegrass by the Pint every Friday with City Hotel and trivia every Wednesday. That helped out quite a bit because folks can hang out, and they want to hang out.”

The potential for Service to be a music venue has certainly been fulfilled. The brewery was a venue for Savannah Stopover Music Festival for the first time last March, packing the house for bands like Illiterate Light, who return to play the anniversary party.

“I love Illiterate Light. I’m just so excited about them,” raves Meredith. “We’re having our bathroom retiled, and I was up there hanging out with the tile guys and they had the radio playing and Illiterate Light came on the radio. They are the coolest guys in the whole world—I felt like we had some of the most genuine and nicest musicians that played at Savannah Stopover at Service. Everybody was just so cool.”

Rounding out the day’s music will be local favorite DJ Press Play and Bluegrass by the Pint alum Cory Chambers of City Hotel.

Another perk of the increased revenue thanks to SB 85 is that Service can continue supporting charities, an important mission of theirs from the start.

“Every single time we change our charities, Kevin and I stay up for hours Googling different charities and trying to find new ones,” says Meredith.

“My friend Anna has been surfing lately, so that’s what made me think of them,” says Meredith.

“Warrior Surf was one of the CNN Heroes last year, and they’ve been doing really well,” says Kevin. “It’s great to support them.”