WITH ONLY a little over a square mile, Thunderbolt rarely (and I mean rarely) sees a new restaurant open. For months I would pass the old Teeple’s Seafood, and wonder what was being done with the new construction of the building.

After a long stint in Thunderbolt’s eye, Teeple’s closed down a few years ago and the building sat empty. That was until owners of Erica Davis Lowcountry, Erica and Dwight Davis, decided to buy it.

Just as Thunderboltians cherished Teeple’s for its seafood, Savannahians have come to love Erica Davis Lowcountry for its showstopping catering service that features oyster roasts and barbeque.

For over a decade, Erica Davis Lowcountry has been filling bellies at events across the region.

“Erica started catering in 2002. I would say the story starts earlier than that because she catered with her dad some when she was younger. In and around 2002 she began catering on her own, she was doing a lot of oyster roasts, a lot of Lowcountry boils, seafood-based catering with the whole background with the Russo family.”

In 2015, Dwight joined Erica and the two extended the menu. With so much success, it was time to expand. There was a need to start renting kitchens in order to support their catering demands.

The original plan for Erica and Dwight was to use the empty building of Teeple’s as a prep kitchen for their catering business. Loyal customers and fans were quick to ask that the duo open up the space as a restaurant. After some consideration, they obliged. 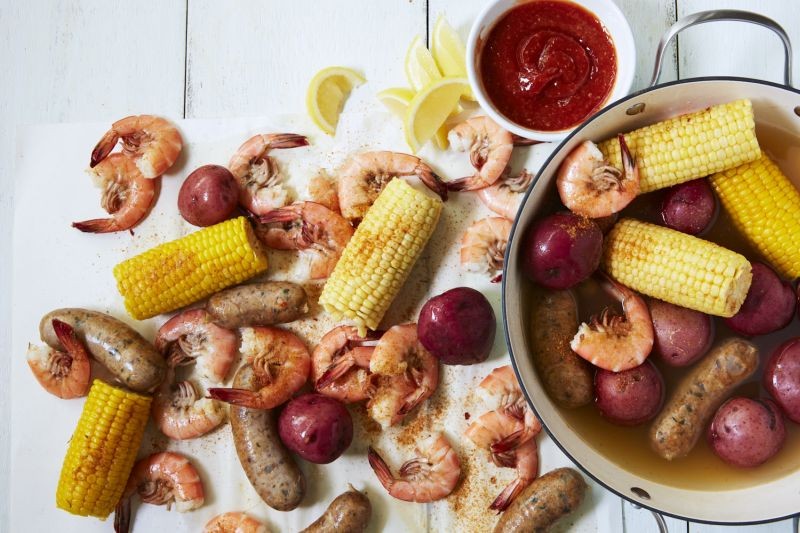 Starting out slow, Erica Davis Lowcountry is open for lunch and takeout. You can take out a meal way past the hours the dining room serves lunch.

As a local, I have tasted Erica Davis’s oyster roasts and Lowcountry boil time and time again and can attest that they serve some of the best in town. Dwight explains the care that is taken by the team in selecting and preparing their oysters.

“With oysters, what we see, is that the flavor of the oyster is in the salt—the briny flavor. Oysters from up and down Georgia and South Carolina coast have different finishing flavors. Some taste smoky, others taste a little sweet,” he says.

“On top of finishing flavors, you have really seventy-two hours before the briny-saltiness and those finishing flavors start to dwindle from the oyster. We do not like to serve oysters that are over two days old. We like to have them harvested the day before, we put them on ice, and we serve them that next afternoon.”

The painstaking care taken in understanding and serving the oysters is the reason why Erica Davis Lowcountry’s seafood taste so much better than the rest.

The fried shrimp was a true surprise on the menu; it is a Savannah classic by all means. The shrimp is lightly breaded as to not overwhelm the delicate pink flesh, and crunchy from a perfect fry.

You get two sides with the fried shrimp and will be appeased with any selection. You get a choice of cocktail or tartar sauce in which to dunk your shrimps.

As a diehard cocktail sauce fan, I stuck by my preference prior to sampling Erica’s homemade tarter sauce considering the cocktail is made from scratch. Once I tried her homemade tarter, I can honestly state the choice between the two is impossible to make.

Like the mains, each side items reflect the culture and history of the area. “With us both being from Savannah, we wanted something that kind of spoke—I don’t know—Savannah. We were trying to get certain vegetables that are fresh,” Erica explained.

The featured crab stew is a recipe that has been in Erica’s family for generations. When you slurp down the velvety broth you will taste the years of history put into its pot.

The red rice—again as classic to Savannah as Bonaventure Cemetery—was perfected over many years. Peppered with tomatoes, the rice is tender but not overcooked. The Southern sides also include succulent collard greens, crispy fries, grits, and mac-and-cheese.

There are weekly specials, each created when Erica Davis Lowcountry formulates its menu for the week. Specials included dishes like fried flounder and grits, deviled crab, crab cakes, and shrimp salad.

During the season, the restaurant will host an Oyster Roast & Barbeque. The first one and most recent roast fell on January 23, 2020 and cost only $35 per attendee. Not only do you get oysters and barbeque that are cooked to perfection, but if you buy a ticket it also affords you sweet tea, a roll, and several side items.

As a local I am extremely excited to welcome a new place within the small circumference of Thunderbolt.

Erica Davis Lowcountry is at 3209 E. Victory Dr. in Thunderbolt.