OUR PORT CITY is experiencing nothing short of a food renaissance. Between food trucks parked on so many corners and the constant influx of new restaurants, it’s almost difficult to keep up.

The grand opening of El Coyote, however, was one that I (and I’m sure most locals) awaited excitedly. If locals weren’t just waiting on the doors to open, you’d never know it by the masses of hungry stomachs already seated and chowing down on the southwestern grub during my visit.

When I saw the crowd that was gathered in this recently re-directioned eatery, I was thrilled to experience the rebirth of an old building while watching these Savannahians get down on El Coyote’s familiar flavors.

Sister restaurant to The Wyld Dock Bar, a popular spot for a meal with a view, El Coyote is Savannah’s newest Mexican joint located at One West Victory.

But before opening the group’s newest creation, Chef Tony Seichrist and Executive Chef Landon Thompson spent a little bit of time in Mexico to “fine tune the dishes,” business partner Brad Syfan said. Their short time spent with our neighbors to the south paid off immensely.

To start, the Pork Belly Nachos are killer and easily distinguished from any nachos you can get in some other restaurant around town. The chips are thick and made in-house, perfect for holding the mounds of toppings served with the feast.

Every single tortilla is topped by an egalitarian hand, ensuring that no bite is unlike the last. And although the toppings are complex, the combination of braised pork belly, gooey beans, sour cream, and so much more works together to create a symphonic experience. 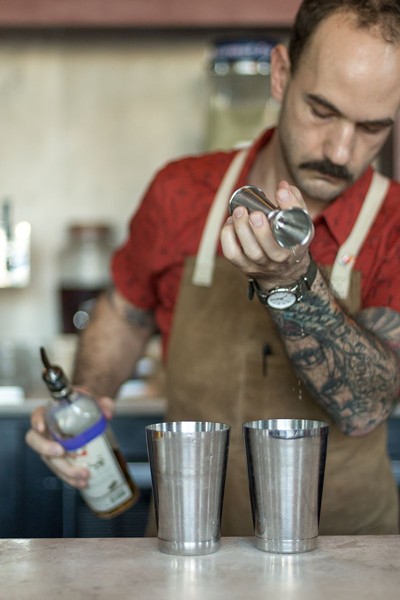 The pork belly is succulent and tender, almost dissolving after striking your tongue.  The beans and jack cheese are hearty and homey, while the salsa and lettuce add a refreshing touch to the plate.

And as your tongue navigates through the layers of toppings, the last thing it will find is a jolt of salty crunchy corn left behind by those warm triangles of heaven.

As for washing it all down, a classic margarita like the Hinley Margarita is a very strong contender for the top spot. The concoction features Reposado Tequila, orange curacao, and lime. A balanced addition to any meal, it is a margarita most would order again and again.

In stark contrast to the Hinley is the Mexican Firing Squad, a beautiful and bright adult beverage. The flavor is tequila forward, but the bite of tequila is quickly extinguished in the back of your throat by the tart lime and floral notes of hibiscus.

A second impressive starter is the Flautas. Syfan says this dish is as if “flautas and Thai style spring rolls had a baby that somehow featured a duck.” Two giant hand rolled tortillas are jammed full of duck confit, meaning the duck is cooked smothered in its own fat, then flash fried to a flawless golden brown.

The two flautas are stacked on top of a salad, perfect for cutting through the rich flavor of the meat, and next to it is a juallio pepper vinegar sauce. The crisp tortillas are light and flaky that melt away in your mouth before allowing the soft oozy duck meat to fall onto your taste buds.

The tangy juallio pepper salve is where the Thai reference comes in; it is sweet yet sharp much like many Thai sauces. The sauce paired with the Flautas adds the right amount of sweetness to a deeply savory dish.

The Lobster Rosarito is something that I insist you try, especially because it is “Chef Tony’s favorite thing to get in Mexico,” according to Syfan.

An entire lobster is fried in pork fat, and by no means would the crustacean served to me be picked last in the school yard. Presented alongside are warm soft flour tortillas, basil, and a chili sauce made with butter, white wine, and a mix of peppers.

The first thing you do is rip the buttery white meat from its shell before arranging it on your tortilla, drenching it in the fiery red sauce, then topping with basil. Although the sauce is packed full of peppers, the gentle flavor of the lobster stands front and center and is only complimented by the butter included in the sauce.

If you want to try something even more authentic than the lobster masterpiece, the Chicken Tortilla Soup is your dish. A whole, bone-in, chicken wing is served surrounded by a titanic helping of warm dark chicken broth, and, although placed within a soup, the chicken skin remains crispy.

Floating in the cumin and chili scented broth are bright creamy avocado chunks, fresh pico de gallo, and crunchy tortilla strips. According to Syfan, the traditional way to eat it is to “drink the broth, then pick apart the chicken with your hands.”

Your palate will notice that the broth is rich and deeply flavored, which comes from a soup that took a lot of cooking time to achieve such complex seasoning. The broth is so rich in flavor it may trick your tongue into believing it is beef broth.

The offerings of Lobster, Duck, and Pork Belly at an affordable and relatable restaurant is something of which a true Renaissance Man would be proud.

Keeping on trend with this city’s food Enlightenment, the driving forces behind El Coyote have plans for two other spaces within the building. Not only are they looking to open Savannah’s only dedicated Ramen bar, but plan on opening a third concept above El Coyote.