THIS YEAR’s St. Patrick’s Day celebration in Savannah may have been the peak crowd ever experienced here — if not in numbers, then certainly in spirit.

Following last year’s stilted, off-kilter celebration, in which a large portion of downtown was an ultra-high security zone due to Vice President Mike Pence’s visit, it seemed the world had built up a great green appetite for a truly epic throwdown.

Here’s my report card from the shenanigans:

Last year, the crowd in Chippewa Square trashed the square so hard, the City took extreme steps to keep the party people out.

That part worked, at least: I walked through Chippewa at the very height of the parade and it was nearly deserted. It was frankly bizarre, a Twilight Zone moment.

Strolling a square over, however, revealed that the usual frat-heavy spring break crowd from Chippewa Square had simply coordinated a mass move north up to Wright Square, which they subsequently trashed just as hard — if not harder out of sheer spite.

In addition to the litter, the greenscaping in Wright Square will have to be mostly redone due to their depradations.

Some people spilled out into the parade route in what some parade marchers said was a clearly unsafe and out-of-control fashion. 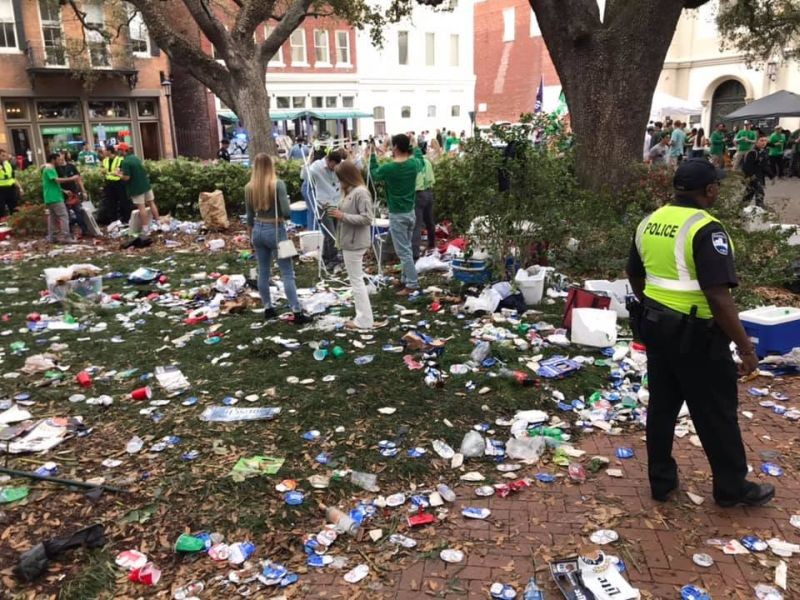 Knee-jerk suggestions such as “make all the squares off limits” are uninformed and impractical. Our squares aren’t only public spaces, they are arguably the very reason St. Patrick’s Day in Savannah is so special.

The City was on the right track with trying to enforce some basic rules at Chippewa, such as no Styrofoam coolers. But when the crowd coordinates on social media to move, as seems to have been the case, the City and police are reduced to just playing whack-a-mole.

The idea of enforcing good behavior seems to have limited value. Maybe the opposite approach could work?

My friend Will has an interesting idea straight from his native Kentucky:

“Instead of trying to maintain order in all of the squares during the parade, the city pulls a Churchill Downs infield and designates one square as the one to trash. Ten-foot chain link barrier fence and fifty cops,” he writes.

It’s obviously an exaggerated suggestion, but it’s food for thought.

In a sense, Savannah tried that already with the brief experiment a few years back to charge for entry onto River Street. But that is a much larger area.

Since asking people to be considerate clearly isn’t working, maybe we can monetize bad behavior instead?

City of Savannah: A+

I spend a lot of time bashing City government in this space, but one thing this City does really, really well is prepare for and clean up after the St. Paddy’s Day Parade. The drill is so well-oiled and so well-managed now, that it takes mere hours to do the bulk of the cleanup for this massive celebration.

If you spent any time downtown at all late Saturday, the level of trash and litter was, quite simply, disgusting and overwhelming. But City crews are undaunted and persistent.

The only thing I’d say is maybe even more temporary trash receptacles should be put up. But will anyone use them?

In any case, kudos to everyone in City staff involved with this thankless but crucial task.

We literally couldn’t do it without you.

The hard-working bartenders and servers at Savannah’s great establishments and watering holes are in my opinion the unsung heroes of this celebration.

I witnessed so much bad behavior from inebriated, entitled partiers this weekend, but always saw it handled with aplomb and professionalism.

Their dedication is all the more impressive given that it’s not only intoxicated assclowns that bar staff have to deal with, but undercover police and Revenue Department moles who come in basically to entrap them. (The City conducted nearly 30 business checks, with 16 cited.)

Letting local families “stake their claim” to public space in the squares, to set up enormous picnic areas, was already problematic. I value and enjoy old tradition as much as the next Savannahian, but the whole landed gentry thing in the squares is hard to reconcile with a truly public and increasingly diverse celebration.

But this increasingly common deal where people set up tents and tables on the sidewalks along the parade route is just too much. Sidewalks are public property for public egress — you shouldn’t be able to block them out of selfish entitlement.

The good news is that this problem, at least, should be easy enough to enforce. Have a cop tell ‘em to move their stuff, and clear the sidewalk, now.