LAST WEEK, Savannahians were outraged as word spread that a healthy oak tree about 100 years old was cut down in a SCAD-owned parking lot facing Drayton Street.

It was taken down the day before Georgia Arbor Day.

Despite the tree’s age and key spot along the Drayton Street oak corridor, the City had opted not to label it as “Exceptional,” which would have protected the tree from most efforts to cut it down.

And because of the lack of transparency in our flawed tree protection process here, there wasn’t any kind of public hearing about it.

The public didn’t know until it was already too late. 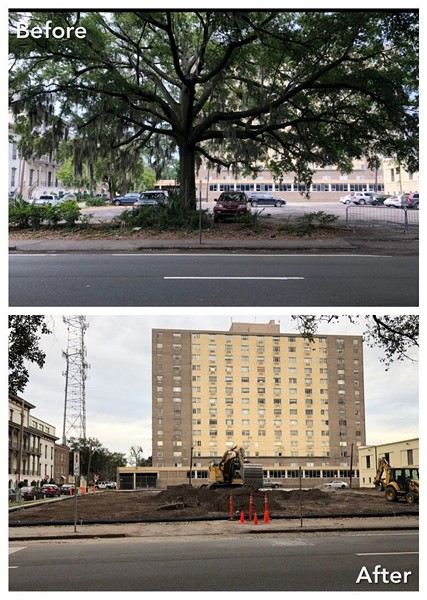 It’s the latest in a string of incidents which have more and more people seriously concerned over the direction Savannah is headed, and wondering if there will be much “real Savannah” left to enjoy when the dust finally settles and the last old oak has gone through the chipper.

The important thing to remember is that history and trees are very much intertwined here. If you protect one, chances are pretty good that you’ll protect both.

For example, if you enforce setback requirements on a huge new apartment complex, you are more likely to not only protect root systems of essential canopy trees, but also more likely to end up with a development that’s properly scaled to the existing neighborhood.

Trees can be as historic as buildings. An oak tree a century old is as much a part of the local landscape as, say, the circa 1929 Seaboard Freight Station that’s scheduled for demolition to make way for one of those huge apartment complexes.

One could argue that an ancient oak is even more precious. Given the volume of development in modern Savannah, and the damaging effects of development on tree root systems, it’s unlikely that we’ll ever again in our history have 100-year-old trees downtown. They simply won’t be able to make it that long.

Heather Gordon, interim executive director of the Savannah Tree Foundation, says the loss of the Drayton oak is a “wake-up call” for the need to improve the process for protecting trees in Savannah, and for the need to more strictly adhere to the regulations we already have in place.

Currently, the City’s default mode often seems to be that protecting trees might put an undue burden on developers.

However, Gordon says, “maybe protecting the trees should be the default approach and the extra burden should be placed on development,” rather than the other way around.

“The City needs to adhere to and enforce the rules that already exist. And when there are subjective or objective decisions to be made within those rules, they need to be made in favor of those trees — not just in over-protection of development opportunities,” she says.

In our current system, trees are commodified as something you can be awarded or debited “Tree Points” for. This system favors developers by allowing them to buy their way out of the letter of the law.

In some cases, developers can just make a payment into the City’s Tree Fund as “mitigation” for their destruction of tree resources elsewhere.

Gordon says the Drayton oak had additional historic and aesthetic value because it was part of the existing canopy corridor.

Its price under the point system: The planting of 8 new live oaks and 6 new maples, along with a contribution of $5,840 to the Tree Fund.

Odds are not a single one of those new trees will make it to anywhere near 100 years. And a mere six grand to purchase the right to take down this historic tree is a travesty.

(Note: The tree in question is NOT the famous Candler Oak nearby. This is a different tree, contrary to what you might have read on social media.)

In addition, the lack of a truly neutral arbiter is an ongoing issue.

The Savannah Tree Foundation, for example, considered the tree to be Exceptional, while the City assessed it as a “Specimen” tree.

Gordon says establishing a process that includes a public hearing component, or includes review by the existing Park and Tree Commission, could lessen the political dimension of tree policy in Savannah.

“Savannah’s urban forest is too valuable to risk. We won’t be able to grow 100+ year old trees in this urban environment again. We have to better protect this essential natural resource now,” Gordon concludes.

You’re living in what’s almost certainly the twilight of Savannah’s fabled oak and Spanish moss canopy, most of it planted in the late 19th century after a series of hurricanes devastated the area.

Now nearing the end of its lifespan in an urban environment, Savannah’s tree canopy is nowhere close to being replenished by the current pace of replanting efforts.

When this tree canopy is gone, it’s gone. Do your best to take civic action to protect what’s left of it. And get out and enjoy it while you still can.