SAVANNAH is not just the oldest city in Georgia, it’s one of America’s most historical cities, period.

When Savannah was founded, Atlanta was over a century away from its own humble beginning as a rail stop called Terminus.

Texas was still a frontier outpost of Mexico more than a 100 years after Gen. James Oglethorpe and company set up shop here in 1733.

The founding of Miami is closer to the present day than it is to Savannah’s origin story.

So of course Savannah protects its archaeological resources. Right?

Wrong. Savannah doesn’t have, nor has it ever had, any City law regulating archaeological finds.

“Inevitably every person I tell that to is astonished,” says Rita Elliott, a local archaeologist who is helping spearhead an effort to formulate and pass Savannah’s first-ever comprehensive archaeology ordinance.

“They’re like, what do you mean it’s not protected — Savannah’s so historic! The good news is when they hear about the idea for a new ordinance, they’re very supportive,” she says.

Elliott and the group Savannah Archaeological Advocacy Group (SAAG) have infused this effort with a fresh sense of urgency.

A new Powerpoint presentation released by SAAG, called “The Goose That Laid the Golden Egg: How Savannah Can Start Benefitting from an Archaeological Ordinance,” pulls no punches.

“The City of Savannah continues a 30-year tradition of ignoring its responsibility to be a steward of its archaeological resources,” it begins, referencing the three decades a local archaeology ordinance has been discussed, to no avail.

“The time is NOW for Savannah to take responsibility, stop the destruction of archaeological sites, and reap the benefit they offer,” the report says.

“We’re just laying the facts on the table,” Elliott says. “For so long, a series of myths have fueled a lack of interest in an ordinance. The myths aren’t true at all, but policy leaders buy into them.”

For example, Myth Number One cited by SAAG is that “Archaeology will stop or slow development.”

“Wrong,” SAAG says. “An archaeology ordinance will enable developers to know exactly what they need to do far in advance, allowing archaeology to be completed prior to construction start dates.”

Myth Number Three says “Developers will not develop if they are required to have archaeology done on their property.”

“Not true,” SAAG answers. “Other cities with archaeological ordinances have shown no decrease in the level of development as a result of archaeology ordinances.” 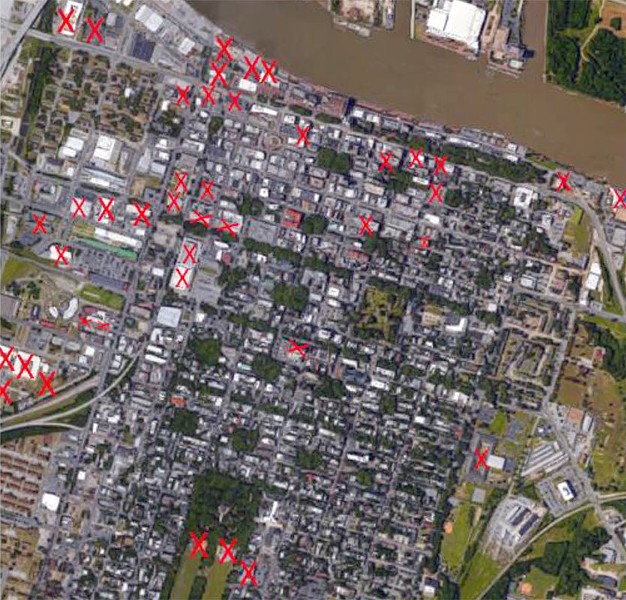 Elliott says that while City of Savannah projects have “done their part to destroy archaeology,” it’s mostly private development that is, in her words, “destroying things left and right.”

She particularly cites the massive new hotel/residential developments all along the Savannah River, and their accompanying parking garages.

“If you drive around and see all the private or city parking garages, most all of them go into the ground significantly. That destroys everything in the garage’s footprint,” she says.

“Likewise, any buildings with deep non-historic basements have taken out whole chunks of the past” with no oversight or regulation.

So what exactly are these chunks of the past?

“You name it: Colonial era, antebellum, during the Civil War, postbellum, not to mention prehistoric stuff,” Elliott says.

“There are 8000 years of prehistory here. There has been evidence of Native American presence found all along Bay Street and River Street. That prehistory is biting the dust as well,” she says.

Elliott says individual artifacts are just a part of the archaeological process.

“Artifacts tell a story, but they don’t tell the whole story by themselves. They have to be found in context, in certain layers of soil, and with certain features that help us put it all together,” she says.

“Every time period has a million stories – whether it’s rich cotton planters, enslaved African Americans, free African Americans, or poor white people trying to get by on outlying homesteads. Most of these stories aren’t in the history books.”

Elliott says it’s been a long struggle. When the Hyatt Regency was built back in the ‘80s, she says the remnants of centuries-old ships and boats embedded on the river bank had to make way for it.

“There is the whole potential all along the river for watercraft, wharves, docks ,” she says.

The position on the new ordinance is fairly straightforward: To be effective, it must regulate private as well as public construction, and ideally there would be a dedicated City staff archaeologist to oversee said regulation.

“The establishment of a City Archaeologist will enable the smooth operation of this ordinance, while eliminating time and funding burdens currently placed on a variety of departmental staff that are untrained in handling such matters,” the SAAG presentation says.

While there is always the temptation to settle for whatever you can get, Elliott says the time for that is long past.

“We’ve lost countless fights over 30 years talking about this subject — why put forth a poor ordinance now?” she muses. “I’m more for starting out with your best and going from there.”