ONE OF the favorite local topics of discussion these days — now that Savannah has been so thoroughly discovered by the world at large — is what makes us special?

What do we agree on that is unique about Savannah?

It was one of the conversations last week at the Massie Heritage Center, which hosted a packed house for Nick Palumbo’s talk, “Preservation Matters More Than Ever,” a title which might tip you off as to what he thinks is the thing that makes Savannah so special and unique. 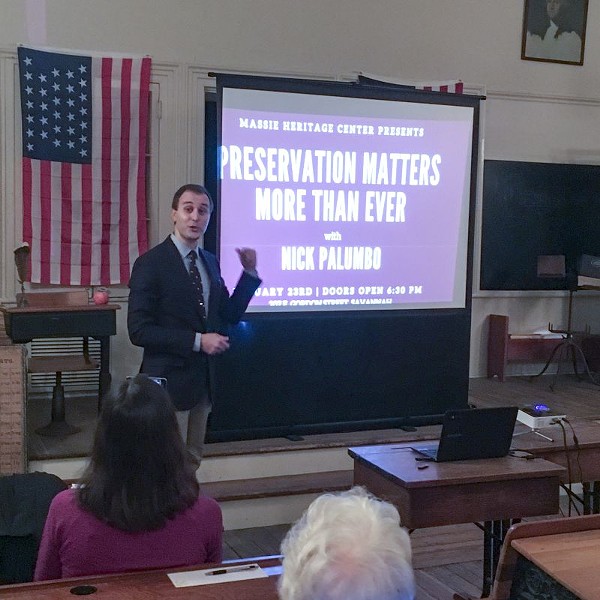 An engaging and entertaining public speaker, Palumbo used a number of techniques to drive home his points.

He asked the crowd to write down the single word — one word only — that best describes Savannah. Most responses were along the lines of “charming,” or “trees,” or “architecture,” or “squares,” or “plan.”

Then Palumbo revealed the results of his research into the top Google search terms for Savannah.

“If you try to identify our core competency — what makes us special and what makes us different — yes, trees and squares are fantastic,” said Palumbo after the big reveal.

“But who we are? We are preservationists. It is what we do... It’s important that we acknowledge how people see us and how we see them, to get an account of where we are.”

While recognizing that the modern preservation movement in Savannah began in the 1950s, when a group of women raised money to preserve the Davenport House, Palumbo identified historic preservation as a thread alive from the first days of the Georgia colony.

“It goes back to the 1790s, long after Oglethorpe sailed back to England. The people of the city said we need to grow, and asked how do we do it. They decided to replicate the Oglethorpe plan. That is an element of preservation: preserving the original plan.”

Palumbo identified other historical currents that contribute to the local passion for preservation, some from rather unusual sources.

He cited Gen. William Sherman’s decision to leave Savannah standing as a contributing factor to local preservation, for whatever reason he did so.

“Regardless of whatever mythology you believe about it, he did,” said Palumbo.

Much like the circumstances around Sherman’s benevolence toward the conquered city, Palumbo says the drive for preservation in Savannah has so far been dictated by largely informal means.

“So many of our neighborhoods operate under a gentlemen’s agreement,” Palumbo said, citing a conversation he had with a homeowner in Ardsley Park.

Palumbo complemented the man on his home, and how historical it is.

“No it’s not,” the man bluntly replied. “It’s not historical, because it’s not designated historical.”

It was an epiphany for Palumbo.

“These titles matter. Unless it’s codified it doesn’t really mean much,” he said.

The hard truth is that outside the Historic District there is virtually no protection for historical structures in Savannah.

The newest evidence of this is the current drive to demolish the historic Seaboard Freight Station on Louisville Road to make way for luxury apartments, a controversy likely reaching a head this week. (UPDATE: The Metropolitan Planning Commission voted this past Tuesday to approve the development plan which would demolish the historic train depot.)

Palumbo’s main call to action was for citizens to organize at the neighborhood and street level for more recognized, legal preservation guarantees.

A former president of the Ardsley Park/Chatham Crescent Neighborhood Association, Palumbo helped spearhead a recent effort in that community to formulate a historic preservation overlay.

It’s not 100 percent protection, but at least codifies a process by which demolition plans can be questioned and potentially headed off in a formal setting.

Palumbo extended an invitation for others to follow in Ardsley’s footsteps, using the same template for activism.

Such efforts will take raising not only money for the administrative effort, but raising awareness, said Palumbo, including a jab at one of Savannah’s less historic tourist attractions.

“In an era of 14 million visitors a year, we’re just beginning to get a handle on the fact that a foot race isn’t a parade,” he said, showing a slide of the Rock ‘n’ Roll Marathon.

“Yes, this is registered as a parade, and they don’t have to pay a fee on it,” he said, to angry disbelief from the audience.

While voicing frustration that, “why haven’t we learned after 300 years to get this right?” Palumbo said there’s no time like the present to preserve Savannah.

“The best places in our city belong to all of us, which isn’t true of every American city,” he mused.

THE PASSING last week of the great local philanthropist, business leader, and gentleman Howard Morrison truly marked the end of an era in Savannah.

In a time marked by almost insurmountable polarization and social/cultural divide, Morrison lived his life by bringing Savannahians together the old-fashioned way: Introducing them, networking them, encouraging them.

His way was indeed The Savannah Way, a method we’ve evolved down here of using personal trust and loyalty to bridge rigid divides in order to move ahead as a community that earns its reputation as a true jewel of the South.

I often heard Howard called a “power broker.” But belying the stereotype of the affluent and insular good old boy network, Morrison worked tirelessly to support anyone in Savannah who was striving, in public fashion or behind the scenes, for inclusion, for justice, for equal opportunity, and for true progressivism.

To say he’ll be missed is to say half the story. Savannah will miss Howard not only as the compassionate and well-rounded human being that he was, but for practicing a deeply honorable philosophy of life that is harder and harder to come by.