Editor's Note: After The Gold Rush

SAVANNAH is in the midst of a literally unprecedented development boom.

The City of Savannah announced last week that 2018 was the biggest year on record for commercial development here. Residential development for 2018 was only barely outpaced by 2016’s growth.

In all, $547 million in new projects were permitted by the City of Savannah in 2018. (Eastern Wharf/Savannah River Landing alone, permitted in October, accounted for more than $75 million of that total.)

Contrast that with the worst recession year locally, 2009, which saw a mere $171 million in development projects.

But the change isn’t only a matter of contrasting during and after the recession. The numbers from 2007, a full year before the collapse, were less than half 2018’s total.

It will be interesting to see if 2019 continues the trend, or if it’s even sustainable. 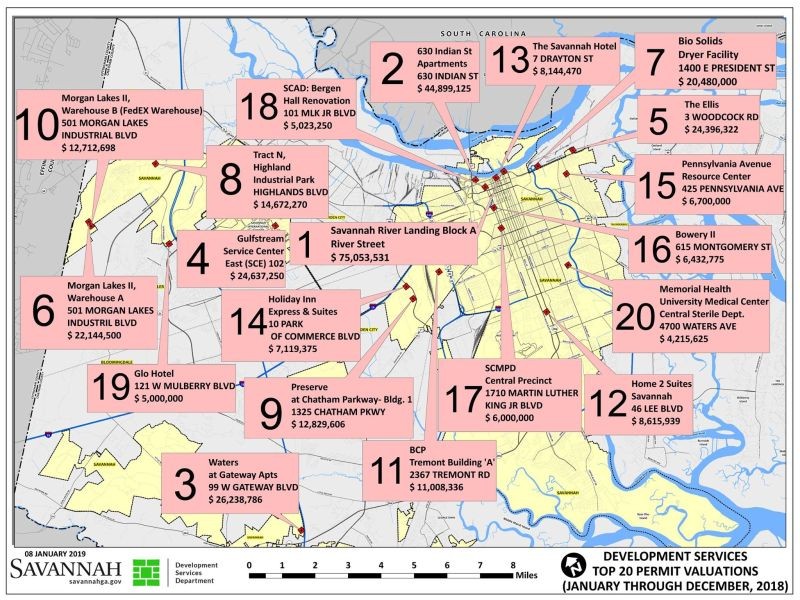 DRILLING DOWN into the issue, a thread on the Skyscraper City blog made the rounds on local social media the past few days. It’s basically a compendium of recent development plans in Savannah, with artistic renderings.

The thread itself was begun seven years ago, so from start to finish it’s a revelation of how exponentially the scale of development has increased since recovery from the recession.

From the massive Eastern Wharf to smaller but still significant projects like The Bowery II on Montgomery, it’s page after page of eye-opening stuff.

It begins with the “facelift” of Drayton Tower in 2012, considered a big deal at the time but in retrospect downright quaint.

Depending on your point of view, you might either by greatly enthused by reading the thread, or greatly depressed.

What stands out to me is not only the volume of new development, but the type.

As one friend ruefully observed, much of it is in the “Soviet Bloc” architectural style: Boxy, generic, and very self-consciously modernist for a city founded in 1733, whose main calling card to the world is its history and unique sense of place.

As you’d expect from the title of the blog, “Skyscraper City,” virtually all these Brutalist new buildings in Savannah are enthusiastically embraced by the commenters, who are almost exclusively from outside the local area.

Given the City’s promotion of new development as an unmitigated plus, you can expect a lot of cheerleading locally as well, especially with City elections coming up.

One thing seems clear: This administration and this city manager pride themselves on being pro-development. Most incumbents will be running on this record-setting level of development.

There will be a chance for the public to weigh in, in frank fashion, when we vote this November.


AS I’VE WRITTEN, one of the most underreported stories locally is the scale of new development well outside the Historic District in West Chatham, much of it in areas annexed by the City specifically for the purpose of residential development.

While most ire is focused on new hotels — actually a comparatively small level of investment compared to new apartments — construction in West Chatham dwarfs most everything that’s going in town.

The scale and speed is stunning, and in some ways almost absurdly so.

For example, several families are already slated to move into the New Hampstead subdivision — before basic infrastructure has even been completed.

The issue came up at last week’s City Council meeting. City Manager Rob Hernandez told Council that “we now know that we have, I think, seven families that are moving into that area, and I don’t have the ability right now to provide them with municipal services. I need to do something right away so those folks can have certain services they expect from the City.”

The discussion was in the context of the City using a shortcut to procure services and equipment off of existing contracts rather than putting new contracts out to bid — a laudable goal, but one which still begs the question of why the cart is being put so far before the horse in the first place.

In the end, this eventually means extra added cost to taxpayers in any case, as the infrastructure will still have to be fully installed after any stopgap measures are rushed into place.

WHAT’S THE RUSH behind all this new development? Indeed, there seems to be a gold rush type of environment in Savannah at the moment.

Like any gold rush, it’s exhilarating and frightening, with a giddy sense of being out of control and of an inevitable crash.

New projects are clearly being energetically pushed into the post-permit phase in order to avoid any further attempts at regulation that might come from, say, the expected adoption of NewZo, or a change in political leadership.

I keep asking where all the new jobs will come from to enable people to afford all these new apartments —virtually none of which realistically qualify as affordable housing — and never quite get an answer.

Is it just a gamble that the national economy will continue to buoy our jobs picture? The Georgia Southern (née Armstrong) Economic Monitor is forecasting jobs stagnation for Savannah for much of 2019.

Is it just a quick-flip cash grab, in the style of the paradigm shift Ben Carter brought to Broughton Street?

Certainly it does no good to adopt a get-off-my-lawn attitude and pine for the “good old days” of fewer jobs and even lower wages in Savannah.

But moving forward it seems prudent that we at least take a deep breath and ask ourselves: What’s the rush?