THE DIPLOMAT Luncheonette has rolled out new and extended hours. But when I popped in last week to get a boat-sized sandwich for a semi-late lunch, I was thrilled to also find a new menu, new prices, and a new face behind the change.

The prices are small and the sandwiches better than ever, but the biggest change of all is the man behind the menu, former chef at the now-closed Our Daily Bread and experienced baker, Joshua Holland. 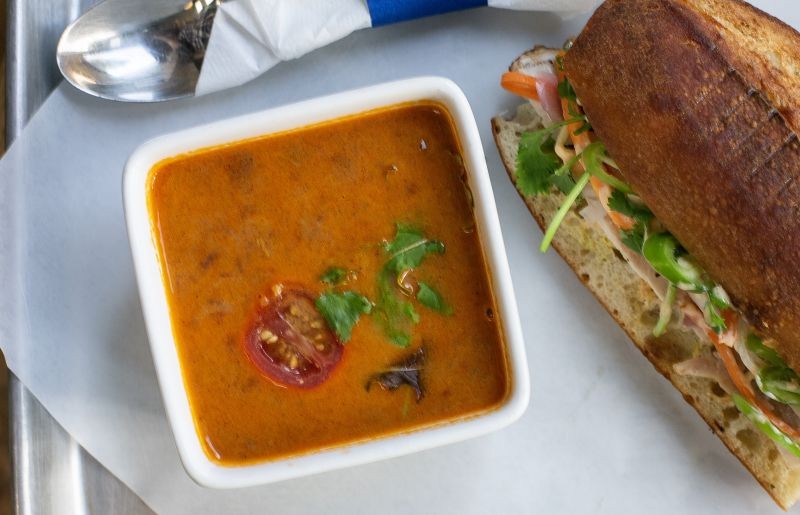 My first question to Chef Holland is how he approached creating this new and improved menu for The Diplomat, Chef Holland tells me, “The current menu is a lot of what we were doing at Our Daily Bread Cafe and what The Diplomat was doing but with a more fun approach and some things that everyone can relate to.”

Because Chef Holland is creating all of the baked goods for The Diplomat Lunchonette, they alone shine as some of the best things offered on the menu and for good reason.

Chef Holland tells me, “The baked goods we are doing here are mostly the favorites I was doing at Daily Bread, and some things we just come up with on the fly.”

The bread that encloses each sandwich is so expertly executed, it almost becomes the star of each of the walk-up’s creations.

Three varieties of Bahn Mi sit on the large menu board at home on the Luncheonette’s wall, pork, beet, and avocado. For those who have never experienced the joy of eating a bahn mi sandwich, bahn mi is a Vietnamese street food with a bit of French influence. The sandwich, that originated in Saigon, traditionally comes with pork, pickled vegetables, and cilantro all encased in a baguette.

I opted for the traditional pork version available on the Diplomat’s menu, and was not disappointed. I have sampled my fair share of traditional bahn mis and can spot a bad one from a mile away.

If you close your eyes while eating the Diplomat’s Pork Bahn Mi you can almost imagine yourself walking through a street market in Asia. Their pork version is the most traditional of the three available options. 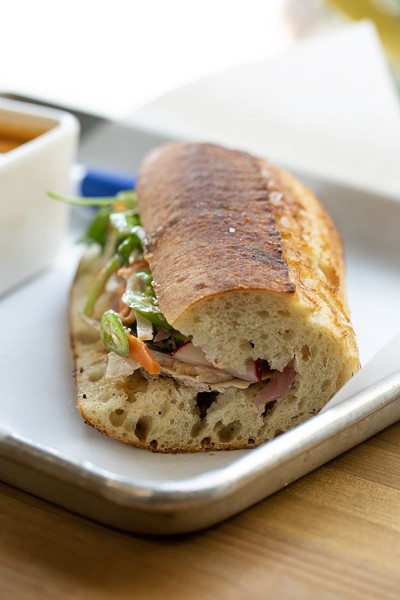 Tender roasted pork lay underneath a bed of crispy pickled vegetables, green and spicy jalapeños and citrusy cilantro, the blanket is a cool yet fiery sriracha mayonnaise. Enveloping it all is Chef Holland’s remarkable baguette featuring its great chew and crispy crust.

For both the avocado and beet version, the pork is substituted with your choice of roasted beet or creamy ripened avocado.

On the other side of the continent—or menu—you will find the Cuban sandwich. It too is true to the classic version of the sandwich and features all of the right ingredients. Two types of pig, smokey ham and juicy pork, work together to coat your palate with a succulent pork bomb. To balance the piggy pair, kosher pickles cut through the fat and bright yellow mustard adds a bite.

Let’s talk sides. The Diplomat’s new prices includes a sandwich and small side or a half of a sandwich and large side for only ten bucks. If you are smart, you’ll order more than one side. Not because you need a larger portion, but once you see the list of sides they boast, you won’t be able to select only one.

You should start with the Mac n’Cheese because as Chef Holland puts it, “We can’t seem to make enough mac and cheese to keep with with the demand. It’s made from scratch and has been a popular item for us.” 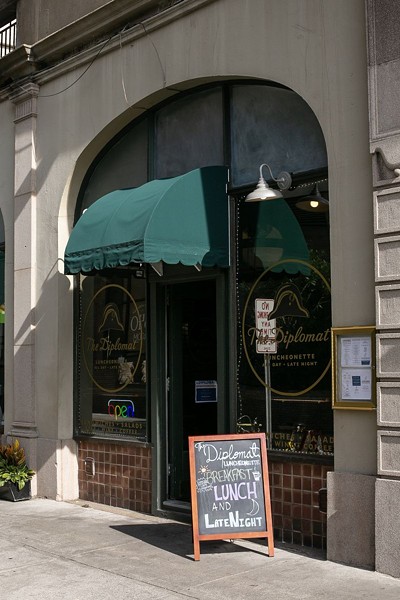 Do not expect to get that weird gelatinous block of baked mac and cheese found on a few too many Southern tables. The Diplomat’s Mac n’Cheese is a lake of creamy sharp melted cheese surrounds al dente pasta.

Chef Holland adds a tiny sprinkle of fresh grated cheddar to the top, which upon looking at it seems like a simple little garnish, but turns out to be one of the best parts of the entire bowl of Mac n’Cheese. His use of fresh, unmelted, cheddar gives the side item a bit of texture and second dimension of cheese flavor.

I will let you decide for yourself whether the Cheesy Grits or Mac n’Cheese are the better side; it was a task too large for me to accomplish.

First of all, how often to find grits with cheese already cooked in them on a menu. Second, Chef Holland adds the same care in composing and finishing the dish as he does everything else. So, my conclusion is The Diplomat’s grits stand up to any other grits around town.

The final side I tried was their soup of the day, a turkey tikka masala soup. The flavor so deep and layered, it tasted as though it took hours to cook.

As to be expected the turkey layered within the soup was fall off your fork tender and balanced out the large amount of spices used to create tikka masala.

The store’s new hours means a breakfast is on the menu, but the late night hours are still the same. After hearing about the items featured on the late night menu, I have found myself looking for a reason to stay out and catch it.

The item that stood out the most was the Pigs-In-Blankets, so I had to find out how Chef Holland makes them.

He explains, “Pigs in a blanket is an item that I made for Pinkies a couple of years ago for an event they were doing. I decided to make it fun and put them in our house croissant instead of the traditional dough they are usually found in.”

On the late night menu you will also find their Quesadilla, Grilled Cheese On A Stick, Thai Beef Tacos, and Pork Dumplings. You have until 2 am on Saturday.

The Diplomat Luncheonette is at 314 Drayton St.