Deciding the fate of the Civic Center and Johnny Mercer Theatre

SINCE JUNE, the future of the Savannah Civic Center has been uncertain.

Acting on a recommendation from the Urban Land Institute, the City Council voted to redevelop the Civic Center site. The decision seemed to happen quickly and without community input.

Last week, the Savannah Morning News hosted a panel discussion of the future of the Civic Center. The lively discussion raised plenty of interesting points that we’ve presented for you here. 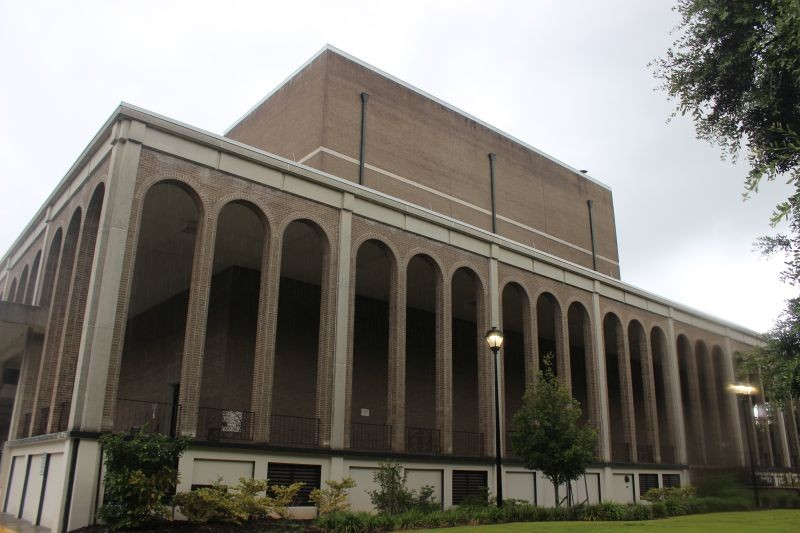 How did City Council come to the decision to demolish the Savannah Civic Center?

Bridget Lidy, the City’s Director of Planning and Urban Design, explained that the City was heavily reliant on a report from the Urban Land Institute, or ULI.

The panel met over two days last October and recommended that the City demolish the building, reestablish the square and street patterns laid out in the Oglethorpe Plan, establish height limits, and pursue mixed-use development.

A major contributing factor was last August’s report by the National Park Service that lowered the National Landmark Historic District’s status to Threatened. That status was determined by large-scale development and the deterioration of the Oglethorpe Plan, or the original layout of Savannah’s squares, two of which were lost.

By taking down the Savannah Civic Center, the City would restore the lost Elbert Square and make a strategic move towards retaining its historic status.

Former City Manager Rob Hernandez also had a major role in the decision.

“He looked at the site strategically and said, ‘Hey, can we go ahead and redevelop it? Can we take it and put it back on the tax rolls to generate additional revenue for the community and potentially redevelopment?’” Lidy explained.

It’s worth noting that in May, Hernandez also forced the City Council’s hand in underwriting a $45 million bond issue to fund the Arena, with funds for repayment coming out of the Civic Center operating fund.

Also of note is the fact that the City is considering contracting with OVG Facilities to not only manage the new Savannah Arena, but the Civic Center as well until the new facility is up and running.

What are the benefits of demolition?

There’s a lot of potential for this site. The idea of redevelopment has been brought up for quite some time now, as Lidy said.

The 7-acre lot is in a prime location, said Neely, and investment in the space would more than recoup the city’s costs of redeveloping the streets and squares.

“Based on the sales of residential and commercial downtown, the properties are probably worth $75 to $100 per square foot, and if you do the math on the five acres of salable property, you’ve probably got from $16 to $20 million dollars in value,” estimated John Neely, chair of the Economic Impact Committee of the Downtown Neighborhood Association. “Hotels can be 50 to 100 percent more valuable.”

Besides the economic potential, the quality of life would improve with redevelopment of the site.

“It’s an amazing opportunity to restore not only the historic grid pattern for the sake of history and authenticity, but for vitality, for tax rolls, for quality of life in the neighborhood, for connectivity,” listed Bill Dawers, City Talk columnist for the Savannah Morning News.

The connectivity in particular is definitely a perk. Restoring the square would help traffic flow more smoothly through the area.

Savannah Coffee Roasters’ owner Lori Collins noted that the Civic Center is actually bad for her business, which is right across the street.

“We get a lot of business from the Civic Center, but it’s not good business,” she lamented. “What it does is it puts pressure on us. We’re a neighborhood place, so you get the neighborhood expecting to come in and get breakfast, and then you get hundreds of people who have no relationship with Savannah. I’m really glad to see it go.”

What are the drawbacks?

“If there’s any backlash to this project,” said moderator Adam Van Brimmer, “it’s the loss of the Johnny Mercer Theatre.” Boy, was he right.

The Johnny Mercer Theatre was a point of heated contention between audience members, who ran the gamut of calling it an asset to the community to branding it an embarrassment.

Editor's Note: Saving the Mercer Theatre? A sound engineer speaks
Many observers are arguing that the Johnny Mercer Theatre must be saved, and that demolishing it would eliminate an important venue with no clear substitute waiting in the wings—so to speak
By Jim Morekis
Editor's Note

Without the Johnny Mercer Theatre, Savannah would lack a venue its size. To its credit, the theatre does pull relatively big names—Vince Gill and Black Violin both perform there this weekend.

Lidy mentioned the idea of the new Savannah Arena filling in some of the programming holes, but that idea was met with skepticism from some audience members.

Savannah needs a theatre the size of the Johnny Mercer Theatre, said Dawers, but making that case could be difficult.

“It’s a big investment, and it’s a hard sell in a city where there’s so much poverty and so many people struggling day-to-day, then to commit those public resources to something that is seen as frivolous,” he said. “I think you can still make that argument, but it’s a hard argument to make, and I’m not hearing a lot of other people trying to make it, at least not publicly.”

What would happen with the space?

That’s a tougher question. The room agreed that hotels were unwelcome, but the agreement seemed to end there.

Neely and the Downtown Neighborhood Association would like to see mixed residential commercial usage.

“We would like to see the City sell off properties of 30 to 60 foot blocks, just like most of the downtown residential areas,” he said.

“Housing is badly needed down here,” said Collins. “I’m probably not in favor of commercial because I know a lot of businesses on Broughton Street who are struggling, and I think Broughton needs to be a flagship street.”

Affordable housing is an important factor to remember. For a city whose economy thrives on tourism, there isn’t much done to help the people who actually work in that sector, namely service industry workers.

Audience member Robin Sherman appealed for high-density residential use, as long as it was affordable.

“If you don’t do anything that is affordable, you’re committing a moral sin,” he warned. “We’ve got so many people working in restaurants that don’t have a place to live easily downtown, and they can’t even get the free DOT because they have to park way down south of Henry Street somewhere. There’s not enough places to park down there.”

Collins echoed the loss of the Civic Center parking for her employees, which can cost less than $3 a day.

With a return of mixed income housing downtown, Dawers said, the downtown area could return to its history of being a mixed income community, as it was for many years prior.

“We need to get more residents downtown. We have a beautiful downtown that so many people would like to live and be part of it, and they can’t,” Dawers said. “Entry-level public safety officer, entry-level teacher, they can’t afford to move downtown and they can’t really even afford the rents. If we do this strategically and leverage the right kind of development and perhaps allow slightly higher height limits than most of the people I know downtown are comfortable with, we could really reinvigorate downtown as a mixed income community, which it just isn’t right now.”

An audience member pointed out perhaps the most prescient point.

“I want us to remember this is one square mile,” she reminded. “Savannah is what, 100? We have a danger of trying to do everything, or trying to put too many things into one place. Scale is key.”

What can the public do now?

Short of a complete reversal on the part of the City, the Civic Center is slated for demolition. However, there’s always the chance to let the City know how you feel.

“I know there are people who are unhappy about seeing the Johnny Mercer Theatre going, but I haven’t seen much concerted effort to push back on the City Council decision to demolish it. I’m just not hearing it. Are people just not paying attention?” asked Dawers.

“I think people were paying attention,” countered Lidy, “because when we were doing the survey, people voiced a concern about the Johnny Mercer Theatre going away.”

It’s our civic duty to pay attention to what our government does. There’s always the chance to be more informed in our local issues.

City Council meets at 2 p.m. on alternate Thursdays. The next meeting is Thurs., Aug. 15. The Council’s agendas and minutes are online for view at agendas.savannahga.gov.