Visit savannahstopover.com for passes and details

IF YOU KNOW anything about Deerhunter, you know that they’re always pushing boundaries. The Atlanta-born indie rock darlings have consistently released barrier-crushing, experimental records over the years that range from their self-described "ambient punk" to art rock, noise rock, and even shoegaze.

They’re hands down one of the most reliably interesting bands working today, and their latest release Why Hasn’t Everything Already Disappeared? is no exception.

The band is set to headline this year’s Savannah Stopover Music Festival, and we spoke to drummer and co-founder Moses Archuleta ahead of their show to learn more about the new album and the history of the band. 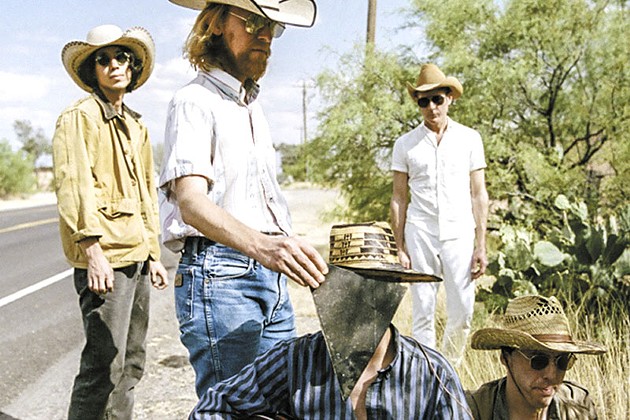 How did you and Bradford [Cox, singer and co-founder] start this band?

Archuleta: I was living in Atlanta and I was booking shows, and Bradford was someone who'd come to a lot of them. I noticed that pretty early on because he's a pretty striking individual. Also, a lot of the shows weren't very highly attended because they'd often be pretty esoteric groups. So I'd see him around, and we just ended up becoming familiar with each other. He had music he'd been working on, like demos lying around, and it was immediately interesting to me.

We found a musical camaraderie, and just started trying to make music together.

Did you have any bands in common that you both were into?

Archuleta: The interesting thing is that - and this even still continues to be the case - he's much more familiar with older music or more classic and established stuff. Interesting avant garde stuff, but reaching backwards into time. I'm someone who's much more up to speed on contemporary music, so we sort of dovetailed in the middle.

Even at a younger age I was like, “I want to like older music but I don’t really know where exactly to look.” And he had that same kind of thing with newer music, and through each other we found a way to bridge that. There was a definite meeting ground at that point in time with krautrock, old garage rock, post-punk, and bands like The Fall.

Early on you guys were touring with bands like Lightning Bolt, which must have been insane. Touring with those kind of bands so early in your career, were they formative experiences at all?

They certainly were, but probably more in terms of energy and approach than any kind of stylistic or musical thing. But certainly there was so much creative energy in the underground music scene in the early aughts. It was really energizing to tap into that.

We’re sort of, like, in the half generation in terms of the inception of those kinds of bands, so I feel like we managed to be in the right place in the right time doing our thing. It was really nice because that was the kind of energy that got me interested in being involved in music in the first place.

Do you tend to sit down before you make a record and say, “This is what we want to do”?

The thing is, there’s always that attempt to sit down. And when I say attempt, it’s like, no matter how much you think you’re mapping something out for an album, when the reality of doing it is happening you have to keep your roadmap in mind but be open to adapting to what’s happening in the present.

In this case, we’d started with [producer and musician] Cate Le Bon, but we couldn’t finish it because of scheduling conflicts. She was working on her album and various other things, and we thought we’d be done sooner than we ended up finishing it. So we ended up having to finish it with Ben Allen, who we’d worked with on a few albums prior. It’s one of those things of having to face the reality. I think we just had to adapt.

There seems to always be a fair amount of evolution with Deerhunter, particularly sonic evolution and just a real pushing of the boundaries, so to speak. How would you characterize this new record in terms of what you were trying to achieve?

I think we were definitely trying to bridge the gap between the cold, experimental dissonance of something like Berlin-era David Bowie and the warm, messy dissonance of something like The Kinks. There’s distance between trying to pull those things together, because they’re pretty disperate. But we were just trying to find out what commonalities there were between those two things, because they were definitely things that were on our minds.