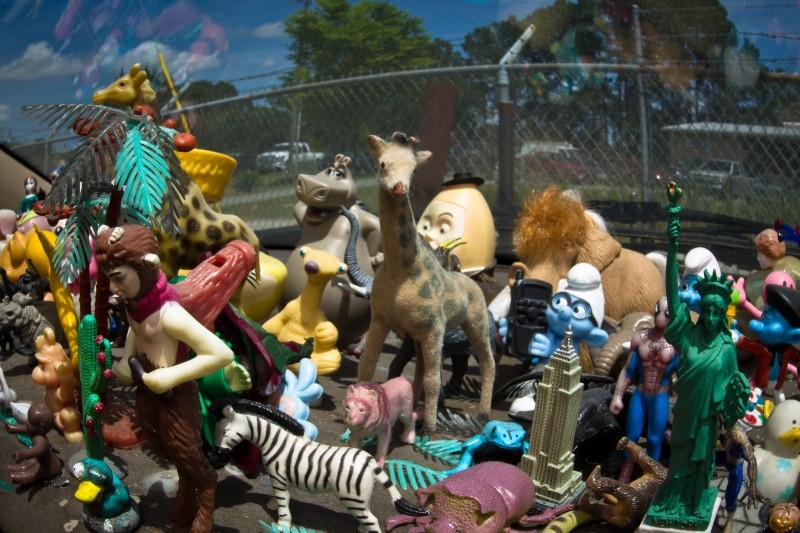 DEAREST community, we are gathered here today to mourn the passing of one of Savannah's most colorful figures.

The 2000 Mazda MPV known as the “Absurdivan” succumbed to complications from a warped engine block after months of hacking and overheating like an asthmatic, menopausal mule.

Daily infusions with the garden hose could not prevent its mysteriously leaky radiator from leaving oozy puddles in the driveway, and its frequent hot flashes were often accompanied by a noxious odor akin to fried dog hair.

It had also been suffering from squishy brakes, a hissing fan belt and a terrifying pause while accelerating out of first gear before it quietly gave out at the corner of Price and Henry Streets during rush hour.

The Absurdivan leaves behind a grieving driver as well as three other immediate family members who are deeply relieved that they will no longer be subjected to its mechanical whims or being snickered at in the carpool line.

They have been reminded that while it was an undeniably embarrassing vehicle to hand over to the parking valet at The Grey, it was also unfailingly hospitable and generated an endless supply of individually-packaged wintergreen Lifesavers from its side door pocket.

With its three hubcaps and terminal pollen coating, the Absurdivan could never be called a beauty, but it made up for its lack of refinement with a most distinctive feature: A figurine-festooned dashboard that provided endless entertainment for its driver, passengers and anyone who bothered to stop texting at a stoplight.

From the first Little Pet Shop bobblehead to the South of the Border sombrero to the one-of-a-kind Troy Wandzel mini-sculpture, this loony exhibition represented a decade of family life events. Its demented plastic menagerie included Disney princesses, pirates, Smurfs, superheroes, toy soldiers, tiny dancers, champagne corks, naked Mardi Gras babies and a veritable safari of exotic animals, including a rhino, two giraffes, a gorilla, a Shetland pony and a sloth.

Among its organic additions were hawk feathers, surf wax and a full set of swallowtail butterfly wings.

Of course, ridiculousness of such magnitude does not happen by itself. Gratitude is owed to the birthday party goodie bags, Happy Meals and 183 tubes of Superglue that transformed it from an ordinary beige minivan into an enchanted multidimensional voodoomobile.

Indeed, there was a certain good magic exuding from all those juju eyeballs. Every tsotchke (defined by my grandmother as “stuff you have to dust”) represented a prayer to keep its precious cargo safe as it navigated the treacherous paved world, each charm an appeal to the angels, the car karma gods and Lady Luck to keep the drunk drivers at bay and the senile in their own lanes.

The superstitious adornment seems to have worked; for all of its crotchety feebleness, the Absurdivan never experienced so much as a fender bender.

Among its many adventures was a cross-country sojourn that wound through Yosemite National Park and the Navajo Nation, across Texas, over the North Georgia hills and finally to Tybee Island, where, sadly, it never got to check riding in a parade off its bucket list.

It once blew a radiator cap deep in the Appalachian Mountains, a crisis ameliorated by a roll of duct tape and a pair of tightly-folded boxer briefs. Mostly, it made its loyal rounds from home to school to work and back again, accruing knickknacks at every turn.

Though it began its tenure as a pragmatic decision paid for in cash, this accidental art project found purpose along the way. Its asinine cavalcade became a testament to the absurd avalanche of useless plastic crap we encounter unblinkingly every day. It also served as a good-natured rebellion against the status our society places on material possessions in general and cars in particular.

The Absurdivan never failed to provoke a reaction, and while most found it delightfully ludicrous, there were a surprising many disturbed and downright offended by its abject rejection of resale value.

Yes, there were those who saw it rollin’ and were hatin’, them in their shiny, leased 500-series jobbies who have never known the joy of gluing one’s fingers together while affixing Marge Simpson as the Bride of Frankenstein to the air conditioning vent.

When they delivered their gas pump sermons on the topic of devaluation, the best response could only be, “What’s your car payment? Bet it’s not less than zero.”

For the most part, the Absurdivan leaves behind a legacy of validating weirdos everywhere, and its loss will make road trips a lot less fun (but definitely less alarming.)

Those wishing to express their condolences are invited to attend a closed-hood memorial service at the First Friday Art March, June 5 at the Old Starland Dairy on Desoto Row.

In the spirit of its gaudy largesse, a raffle will be held to help ArtRise Savannah continue its innovative community programs and Emmaus House and Old Savannah City Mission to feed and shelter the less fortunate. A variety of prizes have been donated from sympathetic local businesses, including A Squad Bake Shop and SOS Tires & Auto.

Each $5 ticket comes with the opportunity to pluck the sun-bleached talisman of one’s choice from the dashboard; chisels will be provided.

In closing, it must be said that the Absurdivan fulfilled a destiny far beyond its station as a shitty minivan. Yes, it got us where we needed to go, except for when it died in the middle of nowhere and that time it fricasséed Seb Edwards’ jumper cables.

But even then, it taught us that sometimes, all it takes to break down barriers between the diverse voyagers of this planet and bring them up to the same speed is a plastic Strawberry Shortcake and a couple of melted lizards.

Oh, and also, plenty of Lifesavers.