World of Beer, the well-established chain of craft beer bars, opened one of its first owner-operated facilities in the country on Pooler Parkway this week.

Typically run by a local franchisee, the Pooler “company store” concept as General Manager Jim Nystrum called it, will be 100% owned and operated by the World of Beer parent company. The Pooler location hosted a charity fundraiser soft-open on Sunday night benefitting the 200 Club and opened to the wider public on Monday.

World of Beer is best defined by its eclectic and extensive selection of ales and lagers. At opening, the new Pooler branch has 54 beers on draft and around 550 in bottles and cans including 12 brewed in Georgia. 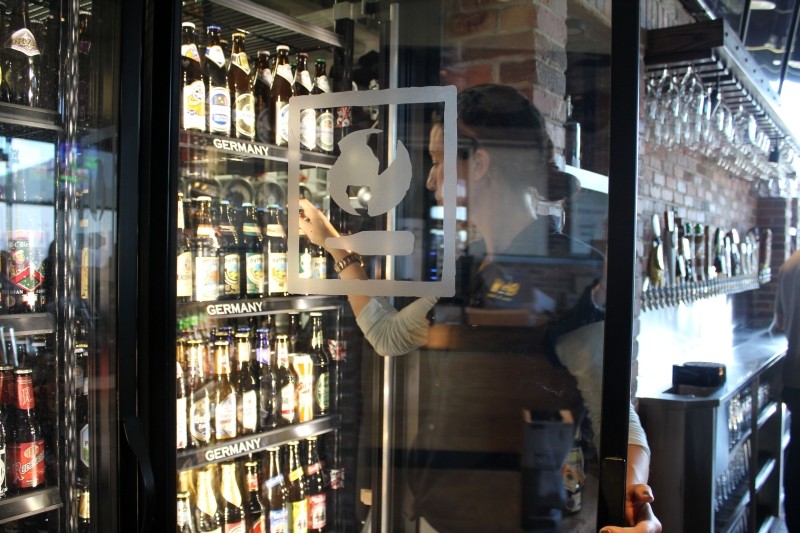 The Pooler spot also features a beer infusion tower, where elements of a base beer can be enhanced by the use of whole cone hops, coffee, spices or anything else the staff dreams up. The beer is pumped through a special chamber containing the additives on the way to the tap spout. For example, a pumpkin beer may be infused with nutmeg, cinnamon and marshmallows for a one-of-a-kind pumpkin pie beer. There is a also a firkin for serving cask-aged beer, often called “real ale.”

After the expected multitudes of beer, each location has its own design aesthetic and creative emphasis. The downtown Savannah location, which opened in mid 2012, for example, is strictly a bar with no food service and the decor is suitably darker and tailored for an adult clientele.

In Pooler, the atmosphere is light and airy thanks to large windows, high ceilings and an open floorpan.

Tegan Foster is a corporate World of Beer consultant. She described the Pooler location as embodying “the tavern experience. Beer is first and foremost. It’s an environment where you want to talk to people.”

The food menu is highlighted by the Chimay Burger, a thick juicy patty topped with cheese from the Chimay Trappist dairy in Belgium. Other pub worthy fare can be found ranging from giant soft german pretzels and tater tots to the Sunday BEERunch menu which includes Belgian beer waffles.

In addition to the beer and food menu, World of Beer hopes that the service will make their locations worthy of repeat visits. World of Beer bartenders and waitstaff receive a crash course in “Beer School.” That means learning about all facets of beer from unique flavor profiles to the locations of breweries before being allowed to serve customers.

World of Beer Pooler is at 238A Pooler Parkway, and is open 11:30 AM - 1 AM Monday through Thursday, 11:30 AM - 2 AM Friday and Saturday and 11 AM - Midnight on Sunday. For more info visit worldofbeer.com/locations/Pooler

Coastal Empire Beer Co. has settled into its Ross Road location and is ready for visitors. Like other local breweries Southbound and Service, Coastal Empire will augment its local presence by offering tours and tastings. This is a chance to see how beer is made, meet your hometown brewers and try some new beverages along the way.

This Saturday will be the first public open house and drop-ins are welcome 1-5 p.m. The events continue after the new year on the first and third Saturday of each month. Tours and tastings are free but visitors can buy a souvenir glass for a better sampling experience and to help support the brewery.

One of the perks of visiting a brewery is to try beers that haven’t been finalized yet. These in-progress brews give a unique insight into the beer making process.

Coastal Empire’s “Southern Delight” is a praline amber that will be out after the first of the year, but you can be one of the first to try a sample batch this week. Coastal also has a single-hop double IPA showcasing the Equinox hop variety that is exclusive to the tap room. The use of Equinox makes a peppery, robust tasting experience that is untempered by the 10% alcohol by volume and features a huge floral and citrus aroma.

Coastal Empire recently won the bronze medal at the 2014 Great American Beer Festival for their “Dawn Patrol” imperial breakfast stout. Entered into the highly competitive Herb and Spice Beer category, the brew bested 147 competitors, and for good reason. The complex but surprisingly easy to drink beer is aged on ancho peppers, cumin, nutmeg, allspice, raisins and coffee from Savannah Coffee Roasters. Modeled after a mole recipe, the beer is delicious and will be available for tasting on Saturday.

Speaking of outstanding local beer, Southbound Brewing Co. has released “The Reaper” into the wild. Southbound’s winter seasonal offering is in the Belgian Quad style showcasing expected characteristics like a smooth, drinkable malt base with flavors reminiscent of dark fruits at the fore. The kicker is a finish that evokes chocolate and cherry cake. You can find it on tap at the brewery or select Savannah locations.