Counting sea stars and other science: A landlubber’s expedition to Gray’s Reef

I KNOW this is practically sacrilege around here, but I am not a boat person.

Whether it’s my desert roots or that I’ve watched Titanic and Jaws enough times to consider them cautionary gospel, the ocean scares the—well, everything out of me.

Sure, I can dig putt-putt-putting through the marshes and out to our lovely barrier islands, but once land is out of sight, I turn a shade of moss green and empty all bodily systems with impressive force.

If I had had to come across the Atlantic with my ancestors from Europe, I’d still be making rugelach in the shtetl.

I mean, I once slept in a life jacket on a Disney cruise.

But I’m never one to turn down adventure, so when Michelle Riley of Gray’s Reef National Marine Sanctuary invited me on a local media expedition 40 miles off the Savannah coast, I accepted. And then promptly purchased all the seasickness remedies money can buy, including a double pack of Bonine and a nifty pair of terrycloth acupressure Sea Bands that made me look like 70s-era Jimmy Connor.

Capt. Todd Recicar assured me that the R/V Joe Ferguson had just come off a year’s worth of maintenance and was in tip-top shape, but I’d seen this episode of Gilligan’s Island before. I showed up to the Gray’s Reef office on Skidaway Island prepared for shipwreck in my very boaty husband’s sun-protective fishing shirt and a pair of his swim trunks stuffed with flares.

But first we had to set sail on our fateful trip. Or in this case, motor up: “R/V” stands for “research vessel,” and this 41-foot catamaran was designed specifically to ferry scientists, educators, divers and curiosity seekers out to the 22-square mile live bottom reef to study its remarkable abundance of critters, including sea stars, sponges, turtles, assorted fish, and *gulp* sharks. 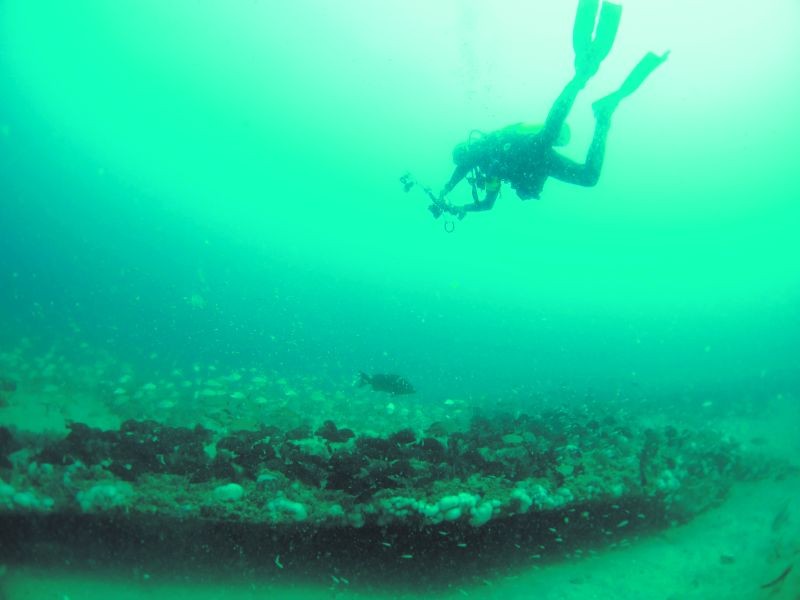 After a quick reminder not to climb up front and pull a DiCaprio, Capt. Todd piloted us past the last buoy of the Wilmington River and with it, the last vestige of cell service. Soon the thin green strip of spartina grass was left behind, nothing but open ocean all around.

“Isn’t this fabulous?” asked WSAV’s relentlessly upbeat Renee LaSalle as she sunned her cute self on the back of the boat, which I know is called the stern from Moby Dick, which used to be required reading for every 11th grader before Common Core, landlocked or not.

I whimpered and stuffed my cheeks with stomach-settling candied ginger from local business Verdant Kitchen, keeping my eyes fixed on the horizon. Michelle kindly kept me distracted by explaining that Gray’s Reef was discovered in 1961 by UGA marine biologist Milton “Sam” Gray and designated a protected sanctuary in 1981 by President Jimmy Carter, one of 13 off the U.S. coast.

The site is managed by the National Oceanic and Atmospheric Administration (NOAA), itself within the Dept. of Commerce, which seems weird at first but makes total sense as the coastal economy is directly related to commercial fishing, tourism, and other industries dependent on a healthy ocean.

An hour and a half later of blessedly calm waters, Michelle announced we’d almost arrived. All I could see was more ocean, because, duh, all the action was underwater. In fact, you’d never know unless you had the right coordinates that one of the busiest and most diverse live bottoms in the world was 60 feet below the hull. (Basically, I learned every seafaring term I know from Herman Melville.)

A speck in the distance soon revealed itself as the NOAA Ship Nancy Foster, a 187-foot rust-streaked Goliath equipped with wet and dry laboratories, diving vessels, oxygen tanks and a slew of data collection and analytical tools to gauge what kind of creatures are out there and how many there are.

It also accommodates a full-time uniformed crew and revolving teams of meticulous researchers who sleep aboard the ship for two weeks at a time, sleeping in roomy berths and dining in a well-appointed mess hall (hello, three kinds of sriracha) that serves ridiculously good barbecue chicken and roasted vegetables.

Us mediaites climbed aboard just as the scientists had just finished their morning dive, eager to discuss their work. Chief scientist Kim Roberson oversees operations and takes the plunge twice a day to count specimens, collect invertebrate samples and observe conditions in the protected research area that comprises a third of the overall sanctuary and is closed to fishing and other recreational diving.

“We’ll use this data to look at changes over time in a place that sees little no to human activity, and we do as much as we can in the time that we have in the oxygen tanks,” she explains, adding with a grin, “Since I haven’t grown gills...yet.”

Her conservation biology colleague Peter Auster has been diving to Gray’s Reef every summer for nine years for the abundance of fat yellow jack, Spanish mackerel, sea bass, grouper and other species that congregate around the reef’s rocky ledges. (Unlike a coral reef, Gray’s was formed when invertebrates began collecting on the sandstone outcroppings around 18,000 years ago, forming a living carpet of complex ecosystem.)

Peter, a gray ponytailed gent who runs the Mystic Aquarium in Connecticut, has been studying how predators interact with prey, which in addition to being the main plot of the horror movie in my head has also revealed that multiple species will work together to hunt smaller baitfish by driving schools towards the bottom.

“That’s not something that’s been detailed before in the southeast,” remarked Peter, pointing to his computer streaming the feed from one of two cameras temporarily mounted on the ocean floor.

“The diversity here allows us to understand that web of behavior and document the invisible relationships of how fish communities function.”

The diver-scientists know where to look thanks to Italian biologist Fabio Campanella, who spends the majority of his time above board “mowing the lawn”—what the other scientists call his technique of combing sections of the reef with sonar to monitor densities of fish in particular areas.

Other projects going on simultaneously on the Nancy Foster are Dr. Danny Gleason’s audit of sponges and sea squirts for Georgia Southern and sea star counts by Valdosta State’s Tim Henkel.

The data collected at Gray’s Reef reveals tons about individual species and their relationships with the vast marine world around them, providing policy makers valuable information.

Of course, the decision makers don’t necessarily make the choices that suit everybody. Seismic testing for oil exploration off the Georgia coast is back on the table in spite of the risk it poses to the North Atlantic right whale, which calves at Gray’s Reef in the winter season.

Overfishing remains a challenge for species like red snapper and flounder, and federal agencies continue to juggle commercial demands with imposed catch limits. Pollution caused by agricultural fertilizers and pesticide runoff, oil spills and plain old garbage threaten marine life and the balance of the ocean itself.

Regarding policy the researchers remain deferentially apolitical, other than to maintain that good science will triumph if people will listen.

“This belongs to all of us,” Peter reminds as a leatherback sea turtle swims majestically into the frame of the monitor.

“The challenge is to inspire a sense of stewardship by bringing the big picture back to the public.” 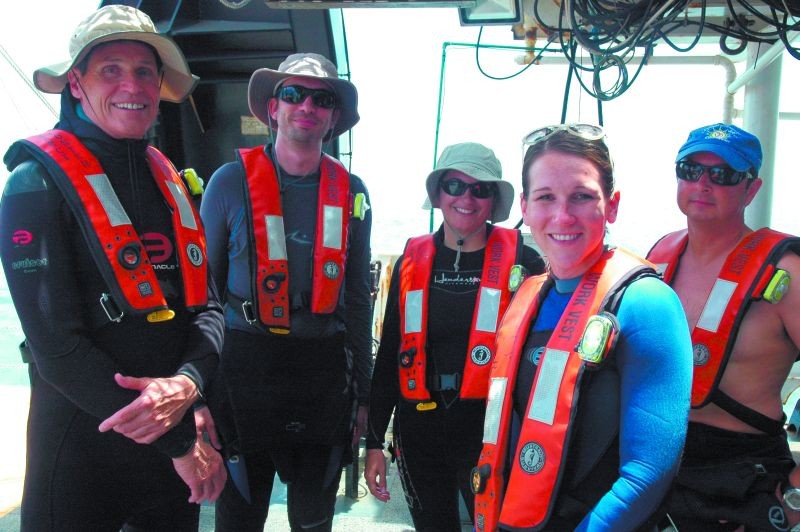 Other than through the wonderful Gray’s Reef Film Festival hosted in Savannah every winter, opportunities for landlubbers to glean how vital this unique underwater paradise is to Georgia and the nation can be as elusive as those North Atlantic right whales (Captain Ahab could relate.)

Fortunately, we can see its wonders on the big screen this summer at Gray’s Reef Tuesdays at the Tybee Post Theater, a captivating weekly film series focusing on the Georgia Coast.

Budding engineers can compete in the underwater robotics contest at the Skidaway complex, and a few lucky teachers get to experience this “living classroom” each year as the finale of the Rivers to Reefs program, imparting their hands-on knowledge of the connections between our watersheds and the sea to their students.

In fact, we passed the R/V Savannah carrying 16 Georgia schoolteachers out for their turn on the Nancy Foster as we made our way back to the mainland.

The chop had picked up a bit, but with Capt. Todd’s deft navigation and my giant bag of ginger chews I was comfortable enough to take a ten-minute sweat nap below in the cushiony hold.

I may have kissed a pile of pine needles upon my return to solid ground, but I did so with a much deeper appreciation of what goes on beneath the surface and beyond the horizon. I’m thinking I just might grow some sea legs yet.

Still, I don’t think anyone is ever going to call me Ishmael.