'Come on up to the table': Mayor Van Johnson stresses themes of inclusiveness at inauguration 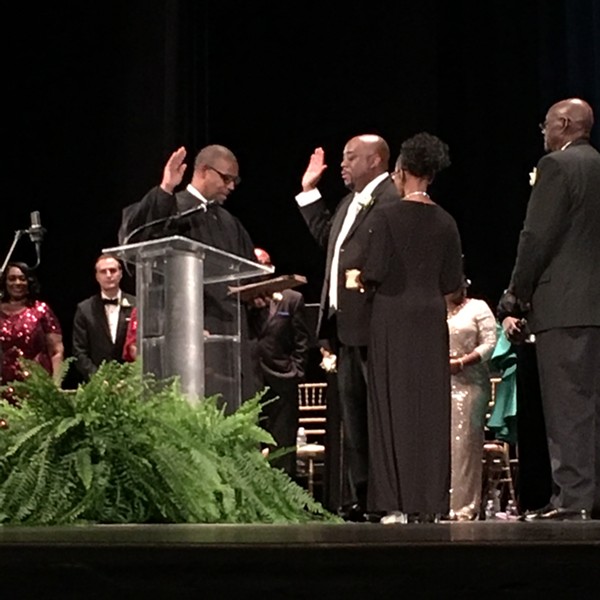 WITH A remarkable display of solidarity and celebration, new Savannah Mayor Van R. Johnson II took the oath of office this past Thursday evening, along with a nearly entirely new City Council.

The star-studded event at the Johnny Mercer Theatre — filled to capacity, with an overflow crowd outside the doors — had more of the feel of a gala than a somber ceremony, with multiple musical performances, a dance troupe, and a pair of wise-cracking emcees.

But the highlight was Mayor Johnson's inaugural address, in which he used the extended metaphor of a meal table at a holiday gathering to reinforce inclusiveness as the overarching theme of his administration.

"And I remember no matter who showed up, there was always food for everybody," he said. "There are those of us who have been sitting at the table for a long time. And you will continue to eat. But we're going to pull this table apart, and we're going to add some leaves to this table.... we're going to bring more chairs, and we're going to make more room... and we don't have to leave anyone out. As a matter of fact, an old saying comes to mind: The more, the merrier."

Further comparing the city's prosperity to a bountiful feast, he said, "This table called Savannah is going to rest on the four legs of Trust, Transparency, Accountability, and Inclusion."

For what was probably the first time in Savannah history, a new Mayor specifically mentioned the LGBTQ, disabled, and homeless communities as all being stakeholders in policy decisions.

While crime was nowhere near the campaign issue in this election that it was four years ago, when former Mayor Eddie DeLoach was elected, Mayor Johnson didn't avoid the issue in his inaugural address.

The only returning member of City Council, other than 16-year veteran Johnson himself, is Fifth District Alderwoman Estella Shabazz, who delivered the acceptance speech for the rest of the Council — Savannah's first ever majority black female Council.

As is usually the case, the inauguration was actually the second time Johnson took the mayoral oath — he took it for the first time at a church event to ring in the New Year. Mayors typically take an oath in private early on Jan. 1 in order to maintain government continuity.
1 comment