Clean up and give back

LAST January, Cari Clark Phelps and Jasmine Head went on a trip that not only changed their lives, but changed the lives of others.

Phelps, owner of Salacia Salts, and Head, her now employee, went on a trip to Hyderabad, India, through the Rotary Club of Savannah.

“We went to see the challenges and opportunities that country has,” recalls Phelps. “We visited a lot of schools in rural communities and we were visiting the projects that Rotary had helped with.”

At one school, Phelps was told about the new bathrooms Rotary had built and took a look for herself. Out in the courtyard, she struck up a conversation with some of the schoolgirls.

“I asked the girls, ‘Are you enjoying the bathrooms?’ And one girl said no,” says Phelps. “I’m like, ‘Really? Why?’ And she said, ‘Oh, we don’t have good bathrooms—that’s the boy’s bathroom.’”

With a sinking feeling, Phelps snuck off to see the girls’ bathroom, which was in considerably worse condition than the boys’ bathroom she had just seen. The cement room had a gutter running through the middle of the floor and a locked wooden door.

“Basically, if you have to go to the bathroom and take care of anything more serious, you have to ask for permission to unlock the door,” Phelps says. “And this is a high school, so we know what girls are going through. There’s enough to deal with.”

When she came back out, Phelps met back up with the girl, who asked her if she herself would use that bathroom. 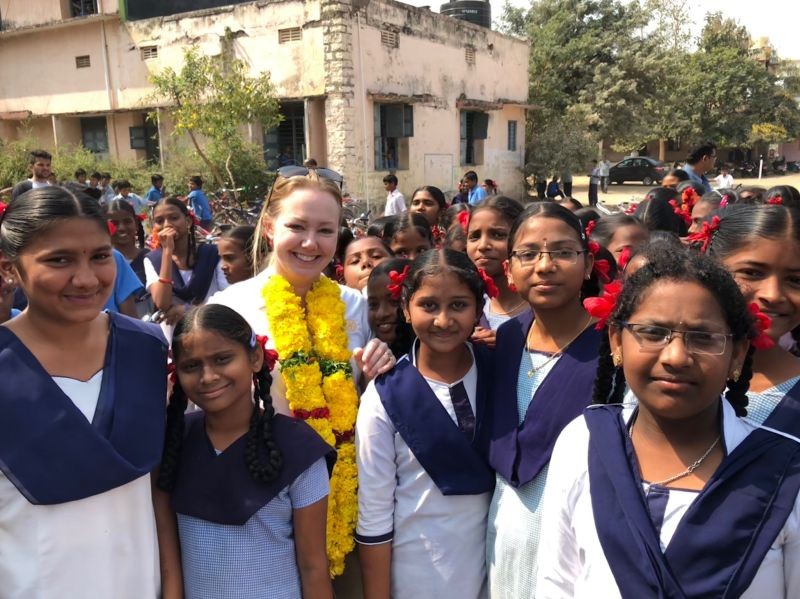 “I held her hands and I was like, ‘I don’t know what I can do, but I’m going to try something,’” remembers Phelps.

A year later, that something is the Helping Hands Guest Bar Soap.

One dollar from every bar of soap sold goes to the fund Phelps and Head set up to promote sanitation, hygiene education, and clean bathrooms. Salacia Salts will match every dollar raised.

“We held a fundraiser when we got back, and we raised $12,000, which built a bathroom already,” says Phelps. “We built the bathroom at the school we went to within four or five months.”

The Helping Hands Guest Bar Soap, which costs $6, comes packaged in recycled fabric swatches donated from local interior design companies. Bringing it full-circle, the bars are wrapped by girls in Loop It Up Savannah.

“That was one of the things that we both came back with,” adds Head. “I have said more times in the last year, just sitting in my house or at my job or in my car, ‘God, I am so fortunate.’ When you come back from a trip like that, you realize how connected you really are. We prepared to go halfway around the world, just like these girls would be preparing to help someone halfway around the world, but what connects is our similarities and they’re so much greater than our differences.”

Having a fully-functioning bathroom is something most of us take for granted, but in regions of India like Phelps and Head visited, it’s sometimes a privilege.

“A lot of the schools we went to, there weren’t any bathrooms at all,” Phelps says. “Some families do have bathrooms, don’t get me wrong, but that week I could see family getting ready for school and the kids would go in the field to use the bathroom. So that’s what they had at home, too. It’s important for the kids to go to school and learn good hygiene, and if they don’t have it at home, at least they’ll have it at school. But when the school doesn’t have it either, I’m like, ‘How do you fix this?’”

“The other thing is that because of not having a great bathroom, girls tend to not go to school about once a week every month,” continues Phelps. “They don’t go to class, so guess what happens? They end up dropping out or getting behind, and that ends up not being good for the future of India or even our world. If you’ve got that many women not being educated and being treated like they’re maybe lesser—it’s interesting just to think that something as simple as a bathroom could help educate India.”

Each bar of Helping Hands Guest Bar Soap comes packaged with a photo of Phelps and a group of schoolgirls, including the girl who spoke out.

“These girls who took the time to step out and approach [Phelps] separately saw that when I say something, something happens,” Head says.

“We probably visited 12 schools, and not one kid said, ‘Hey, help me,’” adds Phelps. “But this girl did—she was brave.”

Salacia Salts is at 208 W. Hall St. To purchase a bar of Helping Hands Guest Bar Soap, visit the store or salaciasalts.com.