Celebrating the blessings of bicycling

MAY IS a busy month in Savannah, so it’s understandable that an important anniversary passed without much fanfare, but I’m a little embarrassed I didn’t notice it.

That’s right, the first ever News Cycle column was published on May 24, 2011. 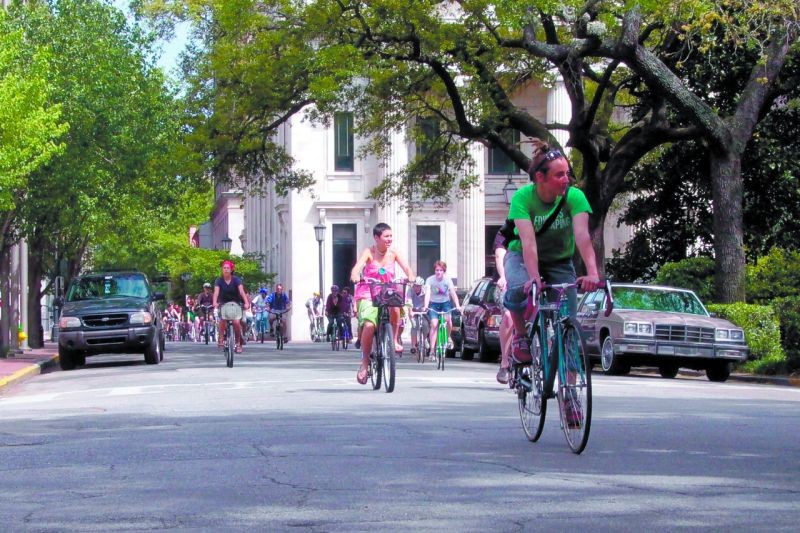 What was I writing about seven years ago? Pretty much the same things I’ve written about ever since:

The economic benefits of bicycling, both to individuals and our community as a whole.

Our huge potential as a bicycle tourism destination.

The dangerous situations many Savannahians face every day as they ride bikes to work, to school, and to other destinations on streets configured to maximize the speed and throughput of motor vehicles.

And the unexpected moments of joy and discovery that can happen when you move through your city under your own power.

What in the world does that mean? Back in 2007, when I was still working at the local art college and relatively new to bicycle commuting, I made a list of sounds I heard on my way to work on morning:

A construction worker singing “Cat’s in the Cradle” at the top of his lungs.

Birds singing at the tops of their lungs (song unknown).

The whine of a circular saw.

The intent of the list, I think, was to document the mostly pleasurable auditory events that I would have missed had I been driving instead of riding my bike.

Over the years I’ve been bicycling for daily transportation, I’ve accumulated memories of moments I would have surely missed, or at least not experienced as vividly, had I been behind the wheel.

I remember riding home from work after dark (and after a long day) to find the ground in Guckenheimer Park covered by a blanket of fog that looked like something out of a Hammer Film Production.

I half expected Christopher Lee to emerge from an azalea bush in his Dracula costume. It certainly put me in the mood for Halloween.

I remember riding downtown for lunch on a hot Saturday in July and being caught in a downpour on the way home. Once you are completely soaked, my wife and I discovered, you really don’t mind the rain.

In fact, it was refreshing. We still recall it as one of the most enjoyable bike rides we’ve ever taken together.

And of course, I remember Jan. 3 when I got my first taste of snow-biking. I’m trying to repress the memory from several days later, of riding over a patch of ice, hitting the pavement hard, and sliding through a busy intersection on my side.

I’ll be thinking about the episodes — chilly fall fog, cooling summer rains, and even snow and ice — frequently we enter the worst months for bicycling in Savannah. I take every opportunity to encourage people to try bicycle commuting or riding to the grocery store, out to dinner, or to a Bananas game, but in July and August I admit it’s a tough sell.

For those of us who have the privilege of driving, riding a bike to work when the temperature and humidity are already oppressive at 7 a.m. is a commitment. But it could be worse. At least we don’t have hills.

The flat terrain of coastal Georgia is one of the few blessings for the thousands of people in our city who ride, not by choice, but out of necessity during the summer. More street trees for shade, traffic signals that don’t require people to get off their bikes and press a “beg button” for a chance to cross the street, and better behavior by those of us who drive would also do a lot to help Savannah cyclists weather the warmer months.

Over the last several weeks, I’ve noticed people on bikes and on foot outnumber people in cars by a considerable margin on my morning commute on Lincoln Street, yet the lion’s share of the street is dedicated to cars. But that’s still not enough to satisfy us drivers.

I regularly encounter cars parked in the bike lane and on sidewalks. This is not only potentially hazardous to people who walk and ride bikes, it sends a very clear message to them: My car and convenience are more important than you.

On humid summer days, it’s hard not to get hot under the collar when people behave selfishly.

When the weather is hot, let’s try harder to be cool to each other.