While Habitat for Humanity usually builds from scratch, organizers accepted the property, and its volunteers got to work.

WHEN Lajuana Hendrix first laid eyes on the house on West 40th Street last year, it was just an empty shell.

The two-story, three-bedroom cottage in the historic Cuyler-Brownsville neighborhood had a foundation and a bit of siding, but the rest of the construction had been abandoned in 2009, leaving the property susceptible to blight. The owners chose to donate it to Coastal Empire Habitat for Humanity, the non-profit that provides affordable housing opportunities for local families.

While Habitat for Humanity usually builds from scratch, organizers accepted the property, and its volunteers got to work on what would become CEHH’s 141st new home. Now the house sports fresh drywall, new plumbing and state-of-the-art appliances. The formerly unpainted exterior is a bright shade of sky blue and surrounded by a white picket fence. CEHH board members handed Hendrix and her nine year-old son Zacharia keys to the front door last week.

Before that, however, Hendrix put in 350 hours of sweat equity into this house and several other CEHH projects, required of any recipient of the organization’s interest-free properties.

“I worked on the porch, painted the walls, and I also helped build three homes in Hudson Hill and Summerside,” recalls Hendrix. “It was a lot of nights and weekends, every day I had off for four-and-half or five months.”

She’s put down the hammer for now but will continue to make monthly payments to CEHH, commensurate with her full-time job as the day rehab manager at Coastal Center for Developmental Services. As with the 140 new homeowners before her, the funds go back to the program to help ensure more families have the same opportunity.

“The vast majority of our families work full-time but are technically homeless because they can’t find affordable housing,” says CEHH Executive Director Harold Tessendorf, who has worked with Habitat for Humanity for 17 years and joined the local affiliate in May 2016. “Our donors and volunteers make it possible.”

The faith-based organization partners with local businesses, congregations, civic groups and individuals to raise funds and gather crews to build its single-family homes. At Thursday’s dedication of Hendrix’s new home, Tessendorf and CEHH board members introduced the 2018 Building Futures campaign, which will “open the doors to homeownership” for six more deserving families this year.

Campaign director John Tatum announced to cheers that 20 percent of the $571,800 fundraising goal has already been pledged, but admonished that there was more work to be done.

“This is a grassroots campaign, and we have around thirty volunteers calling on at least four hundred groups over the next ten weeks,” explained Tatum to the small crowd assembled on the sidewalk, adding that “this is important to this community. I’m convinced that affordable housing is essential for a community to flourish.”

As gentrification drives up property values in some Savannah neighborhoods, others remain stagnant as neglected properties founder and populations age out.

Hendrix’s new home on what was once an “eyesore of a corner” now adds value to the entire street and contributes to Cuyler-Brownsville’s revitalization while maintaining affordability for current residents.

It’s an equation neighbor QuoVadis James, born and raised on this block and self-described “oldest person on 40th Street” at 84 years old, appreciates—almost as much as having Hendrix and her young son living in the bright blue house on the corner.

“We love her,” affirmed James, giving out hugs to Hendrix and the rest of CEHH’s board members. “Thank you all for making her a place in our neighborhood and our community.” 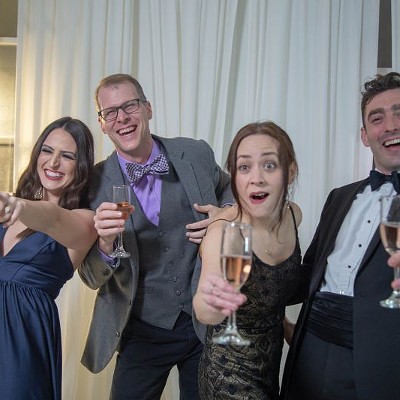 HSF to donate to Habitat for Humanity

By From Staff Reports

See ya ‘round, Savannah

Get your head in the game