WHEN THOSE who cherish the dead are gone, what still remains?

Brandi Marie Little asks herself that question all the time. The artist collects old photographs from estate sales.

“There are these things left over,” Little says. “With photos, there’s always someone who remembers. When they’re gone and no one remembers, these mementos are still here. So I’ve become their caretaker.”

As far as caretakers go, Little is a great one. She creates haunting oil paintings from the photographs she collects. That body of work is on display at “Homecoming” this Thursday night on Fab’rik’s second floor. 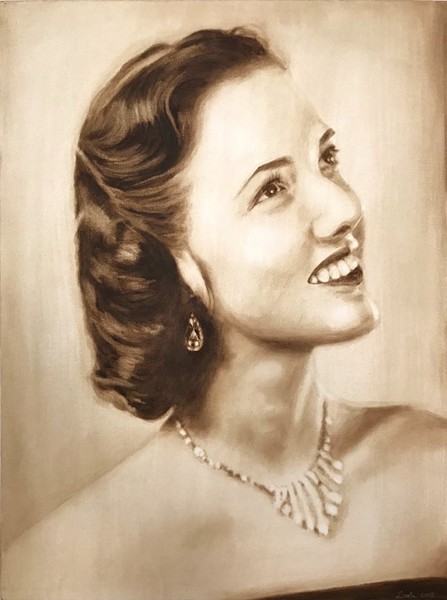 Little has always had a fascination with old photographs.

Part of that reasoning is Little’s personal relationship with death.

“There’s no pretty way to put it other than [it’s] my obsession with loss and death,” shares Little. “I lost my father when I was 20; he was 46 years old. Not long before that, when I was 17, I lost my paternal grandmother, who’s the one who taught me how to oil paint. I was super close to her. And in succession, I lost all these family members. When you lose a parent that young, it just sort of does something to your brain.

“I do have this feeling of a fear of loss. It’s weird. And then I go to these estate sales and antique shops, and you find all these family photos and you’re like, ‘Why are these abandoned? Who do they belong to?’” 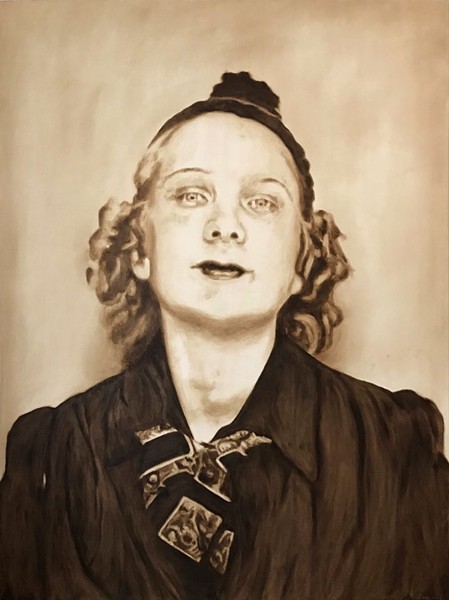 Little also doesn’t have many family photographs or mementos, compounding her need to take care of the ones she does find.

“I think that’s why a lot of people have kids. They want someone to be their caretaker of their precious things,” Little muses. “If you don’t necessarily have a faith that believes in an afterlife, then this is it.”

Part of Little’s compulsion to collect old things is from seeing her family’s precious few things go to waste.

“My grandmother was an oil painter and had all these paintings, and when she passed away, this family member took one and another took one, and then what happened to them? They went to Goodwill. That breaks my heart,” says Little.

Now, Little relies on Goodwill, antique stores and estate sales to find the photographs she turns into paintings.

“Estate sales are both fascinating and fun,” says Little, “and horribly depressing at the same time.”

Little specifically seeks out photos from the 30s, 40s and 50s to reproduce.

“I’ve always had a bit of an obsession with that time frame, sort of that golden era,” she muses. “I think it is idealized in a way, and I myself idealize it, but I just love that kind of nostalgic feel. I love the fact that I didn’t live through it, I don’t know what it’s like, I can’t even relate. It has this kind of unknown magical quality to people in our generation.” 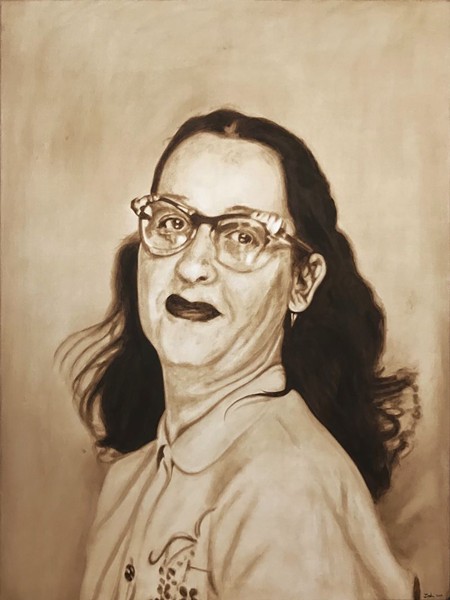 Since she’s working with tiny photographs, Little scans them and reprints them larger to enhance the detail.

“From there, I use oil paint—only one color, actually, which was random,” she says. “It’s raw umber. I wanted to do a sepia tone, so that’s why I went for raw umber. I planned to use white paint, but as I was doing one, I found the white of the canvas showing through gave it a glow. I loved that shine of the light going through. I felt like if I covered the canvas, I would lose that glow. I wanted it to have that ghostly feel.”

That ghostly feeling is evident in the paintings, which are eerily beautiful portraits of people frozen in time, and will also be evident in the installation. Little notes that even the steps up to Fab’rik’s second floor are creaky and spooky.

In addition to the installation, there will be a singer performing pieces from the era of Little’s paintings and the chance for a prom photo op.

“Because of my focus on loss and death, I do want people to cherish their loved ones, cherish their ancestry,” says Little. “Let’s all romanticize the past. Let’s all do it. Let’s dig in. I hope [viewers] find my work striking. I want them to stand in front of a painting and feel transfixed by it. Not just like, ‘Okay, that’s a portrait,’ and walk away. That’s the worst. I want them to feel a little haunted by it.”