The cast can include up to 20 characters, all played by Nash and Horgan

DO YOU find yourself romanticizing a simpler time, back before record heat waves, overpriced healthcare, and the yawning cultural divisions of These United States in 2018?

Perhaps a lighthearted portrayal of the Antebellum South will help you appreciate that life in America was not always great!

“Everything sucked as far as I can tell,” remarks Amber Nash, improv performer at Dad’s Garage theater in Atlanta and the voice of Pam Poovey in FX’s Archer.

Her partner Matt Horgan, Associate Artistic Director at Dad’s, says “For example, battlefield surgery was a bottle of whisky and a saw.”

“Things are way better now. We have air-conditioning. That’s a big one,” adds Nash with a chuckle. 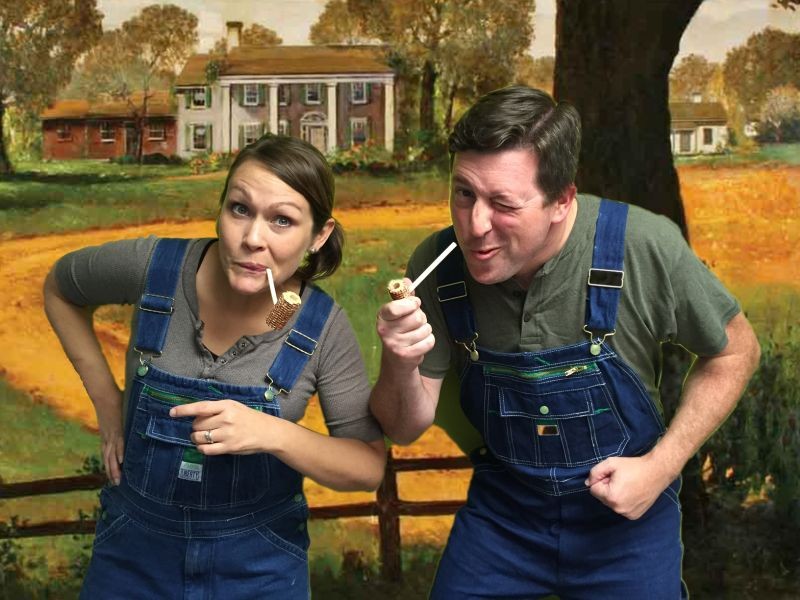 Big Ol’ Show started as a recurring short sketch in the improv duo’s touring act 6 years ago. The consistent positive response across many locations inspired them to expand it to a full show, which they now describe as, “a slice of Southern life with silly characters and ridiculous happenings.”

The cast can include up to 20 characters, all played by Nash and Horgan. “Amber is great at creating varied characters,” says Horgan. Their slapdash quick-changes make resourceful use of hats, wigs, aprons and mustaches.

Both performers must practice vocal flexibility and comedic agility because, as Nash explains, “often times we’ll find ourselves playing a character the other person created.”

Earlier this year, Savannahians were treated to another historically-themed show with Front Porch Improv’s A Complete History of Savannah for Morons.

“Any history lessons or real facts that the audience may learn are purely accidental,” promises Horgan.

Nash says that while the show originally sprang from their imaginations, they eventually did do some research in order to “create more diverse characters, see what kind of things didn’t exist, and get the vibe of the time period.”

“But this isn’t a faithful interpretation of anything,” explains Horgan. “I attempted to watch Gone with the Wind and failed 40 minutes into it. In the end, we just want to make people laugh.”

Nash and Horgan met in 2001 at Dad’s Garage and they’ve been riffing off each other professionally ever since.

“In improv they tell you not to point out each other’s mistakes, always be supportive, and say yes to each other’s ideas,” Horgan says. “But we’ve been working together long enough that we can throw those rules out the window.”

Their conflict naturally turns into comedy.

“There’s a healthy amount of ribbing,” says Nash. “We give each other a hard time in the middle of a show that’s already difficult.”

“If Amber gets a little confused between Union and Confederate, I’m going to immediately jump on that,” says Horgan.

They also set up situations for confrontation, like brothers from opposite sides of the Civil War, or a Yankee heel who’s wandered too far past the Mason Dixon line. Horgan says, “I love to throw in a Union soldier from someplace like Penn-syl-vaania,” he says, drawing out the last syllable.

They note that the show has received a bigger response outside the South in places like Alaska, Canada and Europe. While they’ve had consistent success at their home base in Atlanta, this weekend will be their furthest Southern expedition into the heart of their show’s origins.

They’re excited for Savannah’s fresh seafood and a reunion with some old friends. John Brennan, co-artistic director of Front Porch Improv, says, “we had so much fun when we met in Charleston at Theater 99 that hosting them here was a no-brainer since Savannah has looser liquor laws.”

If you can’t make it to the show this weekend, go see them at Dad’s Garage next time you’re in Atlanta or watch their video sketches and webseries on Dad’s Garage TV.