Smoke Cartel is way more than just a head shop, and not just because they closed all their retail locations.

“It’s turning into the headquarters of a global empire, which it is,” asserts Jessica Leigh Lebos, the former Connect columnist who is now communications strategist at Smoke Cartel. 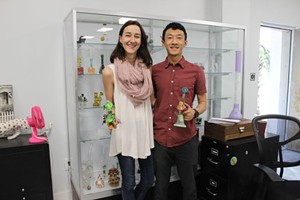 “There’s not much team cohesion,” adds co-owner Darby Cox. “Nobody was ever able to work back and forth feel like you’re part of the same team.”

“There were a lot of bro banker accountant types in here, and I was like, ‘Who are those guys?’” laughs Lebos. “Turns out they were doing this massive audit for the SEC.”

“We’ll be doing some fundraising this term investing that money into growing our product lines, growing our staff, growing this facility—it’s really exciting,” says Geng.

“I think the biggest thing for us this past year was learning how to better target our wholesale customers,” says Cox. “We learned what the business owners really wanted and how to present purchasing things to them. Some big challenges are that they don’t have store displays, so we have models, but they may want a point of purchase display, so we do donut handpipes and sell them in a little box as a baker’s dozen. Little things like that stand out. As store owners, that really helps sell products.”

The cannabis industry is stuck between the goofy stoner stereotype and the serious business that could even bring an end to the opioid crisis.

“People are starting to get it,” says Lebos. “I have people in their 60s laughing at it but also going, ‘Okay, where do we invest?’”

“Ask the school districts in Colorado how they feel about it,” says Geng.

“There’s a 25% reduction in opioid overdoses in Colorado, and right there is the reason,” asserts Lebos. “The revenue it’s generated for public schools, infrastructure, education...”

Even though Smoke Cartel is turning into a huge global empire, Cox and Geng aren’t letting it go to their heads.

“I don’t think it feels very crazy to us—it’s just life,” Cox muses. “We live in our little bubble here; we just come in and work and do our thing.”

prev page 1 of 9 next
Start Over