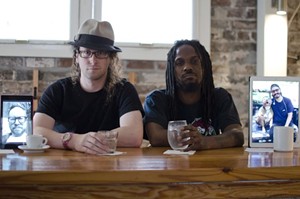 As a band that only plays a handful of times a year, if that, Savannah funk/soul/rock band Ambrose was shocked to be named the Best of Savannah.

It’s about quality, not quantity. Ambrose’s live shows are just that good.

The project, which has had many interations, began a decade ago with Greg Rettig (The Wave Slaves, Sins of Godless Men) and Steven Baumgardner (Basik Lee).

The duo met when Rettig was working on a track for his electronic project Bands with Melody. The dark song needed a rap verse; bandmate Jeremiah Stuard suggested Baumgardner, a co-worker who “said he raps.”

Upon arrival, Rettig recognized Baumgardner from The Jinx’s Hip-Hop Night, set up the microphones, and started the backing track.

“We started recording, and I kept cutting him off,” Rettig explains. “ ‘Nope. Start again. Keep doing it.’ Eventually he looked like he was going to murder me. That’s when I said, ‘That’s what I wanted! Perfect!’ He goes, ‘You’ve been making me mad this whole time on purpose?!’”

“We were screaming at each other the whole time,” laughs Baumgardner. “That’s how our marriage started. We’ve been screaming and doing music together ever since.”

“We’ve been lucky to play with some really talented people,” says Rettig.

“This is a way more comfortable version of the band,” Baumgardner attests.

In the past, unpredictability was Ambrose’s signature. Havoc seemed to hang around the band. Members would be unable to play shows at the last minute. Sometimes, shows were played with concussions or blood all over a broken amplifier. Trumpets were lubricated with Fireball and wine. Despite the chaos, everything fell together onstage into a deep groove powered by Baumgardner’s captivating vocals.

“It was dope when we were all onstage and we could pull something off,” he says. “Now, I think, if we were all just grinding in that work mode, we could have been creating stuff like we’re doing now. Now, it’s inspiring instead of draining.”

The original songs got folks listening at the beginning, but Ambrose cemented a loyal following through their Prince tribute band, Blouses. Originally created for The Jinx’s annual Halloween tribute night, they’ve reprised the act twice—once for Valentine’s Day (Baumgardner’s birthday) at The Jinx, and after The Purple One’s death.

Strangers still compliment Baumgardner on his studied, respectful impersonation of the pop icon; while the band’s appreciative, they’re looking forward to sharing more original material in the future and are planning a second Soul Train-themed event at El-Rocko Lounge. For now, Ambrose is enjoying writing together.

“It’s funny that I’m going to compare these two things, but Ambrose makes me feel like how I felt in Dope Sandwich,” Baumgardner says. “I had a crew that would bounce ideas off each other. That is a lot of fun when you not only have individuals who are good at what they do and are like-minded but can easily just talk and get things across with each other. These last songs we just made up are our best songs. I constantly feel like I have to step my game up, so it makes me feel good to do that.” —Anna Chandler

Runner-up: A Nickel Bag of Funk