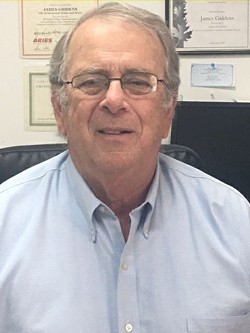 Say what you will. But when you think of heroes, the people who make sure you can flush your toilet are right up there.

“I have two jobs here,” Steinhauser says. “I manage a staff of 34 people, and we operate and clean the City of Savannah sewer system. We make sure lines are running so you can flush properly. If we need to make repairs we go out and fix them.”

Steinhauser’s other hat is to rehabilitate sewer lines. Modernize them.

“My job for many years was televising sewer lines to look for structure failures, to find the reason why there’s a stoppage. The televising also helps tell me when I need to rehabilitate a sewer line,” says Steinhauser.

“We fix stoppages by a combination of better techniques and by rehabilitation of the worst lines. I’ve got $2 million a year to spend on rehabilitation, and where’s that spent? It’s going to be spent on the worst places that need the most work.”

In the last ten years, he says, complaints about sewer stoppages have decreased by 70 percent.

Half of his job, Steinhauser says, “is to field questions from customers who have a problem. When Harry Jue was running the water department, he would sometimes tell me, “Bill, I want you to handle this problem because you have a good PR hat.’

“Mostly though, I want to be a good public servant,” says Steinhauser.

As you would expect, there are challenges in maintaining the sewer lines in Georgia’s oldest city.

“The older system downtown is 150 years old, minimum. Those are old terra cotta, baked clay pipe. Not so much on River Street, that was replaced when River Street was renovated in the ‘60s,” he says.

“But starting at Bay Street, those lines are 150 years old. A lot of those I’ve rehabilitated, because we don’t any stoppages down there, especially in an area with so many restaurants.”

Most neighborhoods north of Victory Drive are the terra cotta pipes, he says. “And a little bit south of Victory, in Ardsley Park and Parkside, there’s still a lot of terra cotta too.”

But the biggest issue actually isn’t the legacy pipes, but some of the later suburban sewer lines made of concrete.

“As the city started moving South after World War I, they began to use concrete pipe, not knowing it was bad. It’s very permeable, and gases can get inside the pipes, along with all kinds of other issues,” he says.

“Half of Windsor Forest, which was built in the ‘50s and ‘60s, uses concrete pipe. We fix it by lining it with a product that’s as strong or stronger than PVC.”

When the City’s main water treatment plant on President Street came online in 1970, other than a couple of other, smaller treatment plants, “everything here was treated by nature. Nature will take care of sewage – it just takes longer,” says Steinhauser.

The President Street plant treats 24 million gallons per day, he says. “Within hours of arriving in the plant, the water that leaves the plant is almost standard drinkable water. I would drink it in a heartbeat vs. what we swim in at Tybee, or the water in the Savannah River.”

Steinhauser long ago came to terms with society’s usual opprobrium about his job.

“People tend to put sewer workers in the same category as garbage collectors. It’s seen as a bad, nasty job,” he says.

“But while I’m from Savannah, I grew up in New York City. I remember the trash collectors strike in the ‘70s, where the trash bags piled up for a solid month, in the summer. You get a new appreciation for the people who do those kinds of nasty jobs when you have to go without for awhile.”

Speaking of Best Of Savannah 2017

Most Important Local News Story of the Past Year