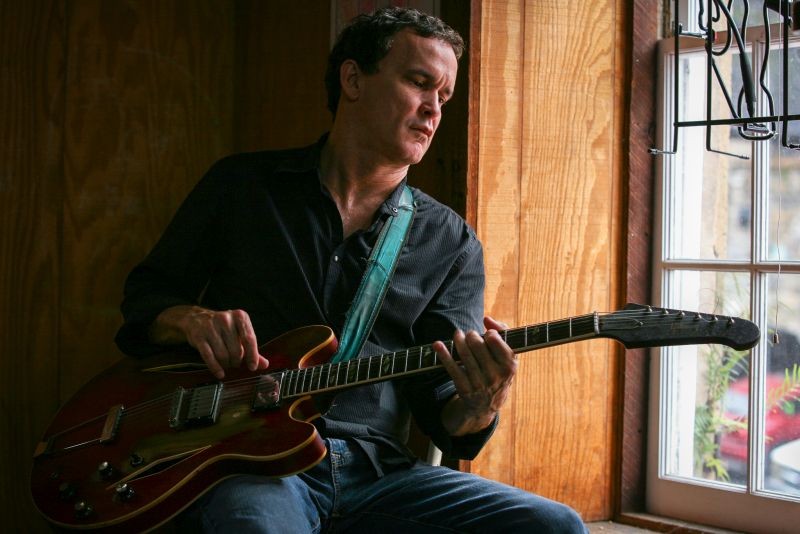 Bluesman Eric Culberson has been taking home the Best All-Around Musician reward for so many years we can barely count. But what’s it truly mean to be a great all-around musician, anyway?

The category’s been around for far longer than this writer has been a Connect employee, but I’d say the rubric should be something like this: they’re a technically proficient player with a tireless work ethic, DIY know-how, and an engaging stage presence, possessing a versatility that allows them to perform with a variety of musicians regardless of genre. A great all-around musician also has a humble, friendly demeanor, allowing for genuine engagement with audiences.

That’s Eric Culberson, people. The guitarist and vocalist can light up The Warehouse on River Street or a concert hall in the big city and thrill and connect with both crowds.

Culberson was “reared” in Savannah (“I did not grow up!” he quips), teaching himself guitar by playing with others and developing a good ear. He began playing professionally in the late 1980s and early ‘90s, he estimates, when his “night gig” transformed into his mainstay.

“I was doing construction work and historic renovation,” he recalls. “I knew I loved guitar and liked playing it, but I never thought about doing it for a living. Then, I kind of got off the day wheel, was doing the night wheel, too, and one day the day wheel got cancelled out.”

It was tough leaving a gig at 3 a.m. and hitting a job site at 6 a.m. “I did it for a while and it was kind of messy,” he admits. “Probably the only time I’ve ever been fired in my life is when I fell asleep in a port-a-john because I’d been up all night!”

Early on, Culberson was inspired by Nashville Cats, Iggy Pop, and the three Kings (Freddie, Albert, and B.B.—he and other local musicians paid tribute to them at The Lucas in 2015). These days, he’s feeling the country vibes and particularly dug that last Sturgill Simpson record. When he and his band hit the studio again—hopefully soon—he looks forward to putting those elements to tape.

“I’m not going to be the master of the art of country guitar pickin’, but I want to have that inflection,” he says. “To me, that’s earthy and organic just like the blues is. All music is not blues music, but it’s all the blues. Even Beethoven—dun-dun-dun-DUN—the energy is the blues. It’s the human element of happiness or sadness. Old country music is blues to me... and modern pop-country gives me the blues!”

Culberson, whose weeks are packed with local gigs and weekends are often studded with touring dates, suffered a major setback when he was in a motorcycle accident last October. Unable to walk, he played through his recovery and used a walker for some time; though he’s had some scrapes and breaks throughout his adventurous life, that incident gave him a fresh outlook.

“Being able to stand up is pretty cool,” he says. “I realized how much I like to stand and move around. It was survivable, and I got to come back and get back in my own skin—some people don’t have it that fortunate. That’s definitely helped me to appreciate playing music. Waking up every day and going, ‘Man, I gotta move some equipment or buy some strings...’ well, that’s because I’m a musician, and thank God! It helps me appreciate who I am.”

Right now, Culberson’s enjoying working on new jams with his band, Larry Duff and Jonathan Hill, and giving the arrangements room to breathe and grow. Even when he’s shredding songs he’s played for years, he still loves what he does.

“It’s not for everybody,” he says of the gigging musician’s life. “I play these songs every night, and I try to not just play through ‘em, you know? I like to really bring out the soul and essence and story of the songs. Even though we’ve played ‘em a few thousand times each. You’re making music and telling a story. It’s like, you don’t get tired of saying ‘hello’ to people. You can say ‘hi,’ or ‘how you doing,’ or ‘what’s up.’ It’s the same message. It’s ‘hello.’ That should never get old.”

Culberson gives thanks for his bandmates, supporters, the local musicians who inspire him, and for the ability to play right here at home.

“Not everybody can do what they love and not have to relocate,” he says. “And when it comes to me and my band, I’m only as good as the two guys behind me, and we’re only as good as the people in front of us. Even though I’ve won this a lot of consecutive times or been close, I never take it for granted and I really, really appreciate it.” —Anna Chandler

Speaking of Best Of Savannah 2017

Most Important Local News Story of the Past Year

‘We have not stopped’: Fort Stewart-Hunter Army Airfield commander looks ahead