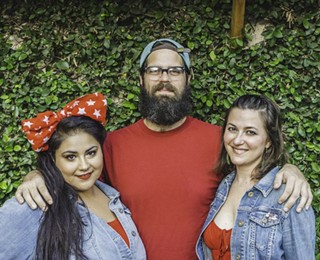 Cabaret, the beloved 1966 musical based on a 1951 play by John Van Druten, is a show that has continued to thrive thanks to theaters all around the world. Savannah Stage Company’s recent production of the classic was a big success and proved just how ingrained the story is in the world of musical theater. It was one of several shows done during the company’s 2018 season, all under the direction of co-founder Jayme Tinti.

Tinti, Ambrose, and Pridgen have all been at the forefront, thanks to the growth of Stage Company and everyone involved, of bringing awareness to Savannah as a city whose theater community is just as fruitful as New York or Atlanta.

Ambrose says she “lucked out” when she moved to Savannah from New York and happened upon Savannah Stage through an advertisement.

“I’ve been acting since I was a child, and I got my BFA at Florida State University. After I graduated, I ran an all-female Shakespeare repertory company up there. And when my husband and I decided to move to Savannah, one of my biggest concerns was whether I was going to be fulfilled as an actor, producer, and performer,” she says.

Pridgen and his brother, fellow co-founder Bryan Pridgen, also saw the need for accessible theater in Savannah and—alongside Tinti and their other founding members—decided to take the leap and move down. It’s been a successful journey so far, with several seasons under their belt since they began in 2012.

“We packed up and all moved down here to start the company, and 100 people later we’re still going,” he says. – Sean Kelly

A tale as old as time: Savannah Stage’s Beauty and the Beast