"WE'RE all just people, some of us accidentally connected by genetics, a random selection of cells. Nothing more."

So spits Ivy Weston in Tracy Letts’ Pulitzer Prize-winning play August: Osage County, the latest undertaking from Collective Face Theatre Ensemble. As a part of its Season of Marginalized Measures, the local theatre collective tells the story of a family confronting their demons in the sizzling heat of the Oklahoma plains.

The dark comedy-drama—winner of five Tony Awards and three Drama Desk Awards for its intense ensemble narrative—is arguably one of the most challenging productions out there.

At three-and-a-half hours long with two intermissions, the audience delves deep into the Weston family turmoil, carried out by a who’s-who of Savannah theatre.

“I have just fallen in love with the script more and more,” director David Poole says. “Tracy Letts was so genius. He uses themes and plays from his favorite authors—you can tell there’s a lot of Chekhov in here, a lot of Edward Albee, Sam Shepard. It hearkens on the themes that are within great plays of our time, and it’s epic and huge.”

“It is daunting and demanding and the writing is just phenomenal,” Poole says. “And these performances are un-freakin’-believable. These are powerhouse people, and when I knew I was doing this play, I had to get the best people together.” 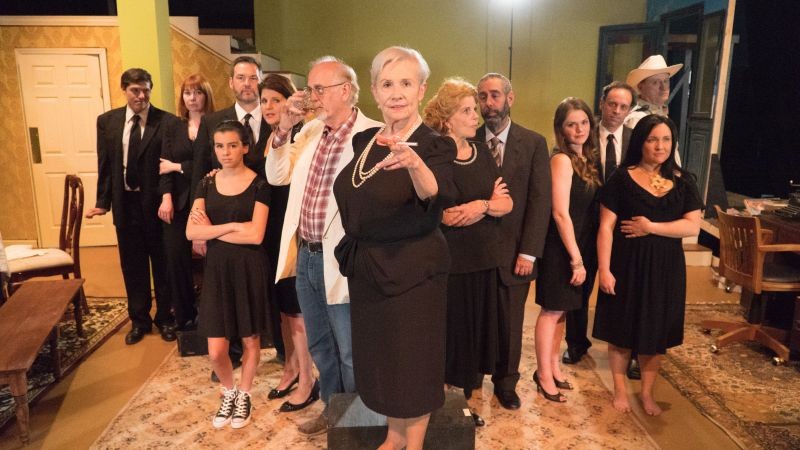 It’s a final curtain call for Collective Face’s former Managing Director and charter member Dandy Barrett, who will move to Connecticut to be closer to family.

“It’s a great loss to Savannah theatre,” Poole laments. “I knew it was going to be her last performance, so I said, ‘This is the one. We’re going to go out with a big bang.’”

A vast set, modeled as a Western house, allows audiences to sit right in on the Weston family turmoil.

“The Broadway show was known for an epically huge set, and it’s a challenge to stage a play that big where the set doesn’t diminish the size of the performance,” Poole says.

“It also needs to be its own character. For me, that’s a great starting point for a show—the set is just as intrinsic to the play as one of the characters.”

In his script, Letts describes a house that was decorated in the 1970s and was never quite altered.

Poole has covered each room in vintage flocked yellow wallpaper, a wink and a nod to Charlotte Perkins Gilman’s feminist classic ‘The Yellow Wallpaper.’

“This house looms over all the characters,” Poole says. “The girls are trying to or have escaped the house, and now it beckons them back. Even though it’s not, it sounds like a horror movie—a house that won’t let you leave.” 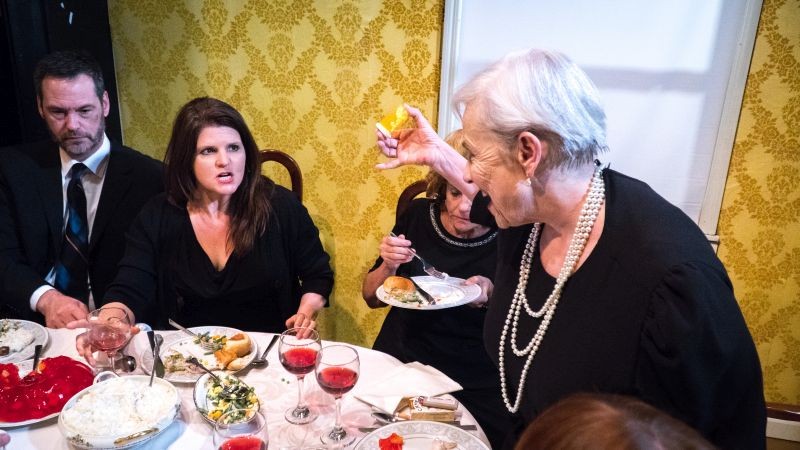 Some may be familiar with the Academy Award-nominated 2013 film adaptation of August: Osage County. While the red-hot cast (Meryl Streep, Julia Roberts, Ewan McGregor, Chris Cooper, Benedict Cumberbatch, Sam Shepard, and more) showcased the original play’s darkest themes, Poole notes that the movie is not necessarily an accurate picture of Letts’ script.

“Most people say, ‘Oh, it’s so dark!’ Poole says. “It’s actually really funny... that’s one of the things the movie did disservice to the play. In the movie, they don’t have the audience’s reaction to react off of. In the play, there’s all these funny moments, and the audience starts cracking up, and of course there’s interplay with actors onstage breaking the fourth wall.”

The play dives deep into themes of aging, the concept of home, addiction, race, heartbreak. It’s an intense take on everyday battles, and amplifying those struggles onstage allows the audience to connect with the work.

“These are issues that all of us deal with,” Poole says. “That’s why this is such a great play. You’re in for a bumpy ride, but everybody identifies with this play in some way, shape or form.”