At home for the holidays with CASA

"CASA exists because the system is broken," asserts Kate Blair. "We’re trying to work ourselves out of a job."

Blair is the executive director of Savannah-Chatham CASA, or Court-Appointed Special Advocates, which works within the county’s juvenile court and foster care systems to serve our community’s most vulnerable children.

Currently, there are around 400 children in the foster care system. CASA’s team of volunteers serves 54 percent of those children and aims to reach 100% by 2021.

“Every child in foster care has an attorney assigned to them, and they also have a caseworker from DFCS,” explains Blair, “but often those two individuals have 20 to 40 cases, so it’s easy for a child to not feel heard and for things to get missed because, through no fault of either of those professionals, there’s just too much. The system doesn’t operate efficiently.”

So, CASA volunteers are granted guardian ad litem of a child in the foster care system, which enables them to make requests for and advocate on behalf of the child. But, Blair explains, the most important job is to provide the judge with another perspective.

Chatham County’s judges are supportive of CASA and rely on the volunteers’ testimony to make big decisions about the child’s guardianship.

“Our goal is to make sure the children are safe and cared for where they are in foster care, but also that they reach permanency quickly,” explains Blair. “We’re trying to push them quickly through the system so they don’t linger in the system. More than 50 percent will go home to their families; reunification happens most often. I think people often think about children in foster care that they all just need to be adopted, but there are a lot of kids who just need to go home with their families.”

CASA’s volunteers go through nearly 50 hours of training to learn the ins and outs of the justice system, the signs of trauma, and how to care for a child who has been traumatized. Each child’s case is unique and sensitive because of the lived trauma they experience.

“We forget that even though they’re in a pretty bad situation where they’re experiencing abuse and neglect, that’s still their family,” says Blair. “It’s all most of them have ever known.”

As such, the holidays can be a tough time for foster kids. CASA seeks to help their kids this time of year with a Holiday Gift Drive, which is open through Dec. 10.

Participants in the gift drive are assigned a child in CASA’s system and given their wish list for the holidays. By buying the gifts on the list, the participants help ensure that the child gets to experience a holiday just like everyone else.

“It’s not that we think these kids deserve or need to be spoiled, but that they just need to have a Christmas, just like every other kid gets a Christmas,” says Blair. “It’s bringing that normalcy to what’s otherwise an incredibly abnormal time in their life.” 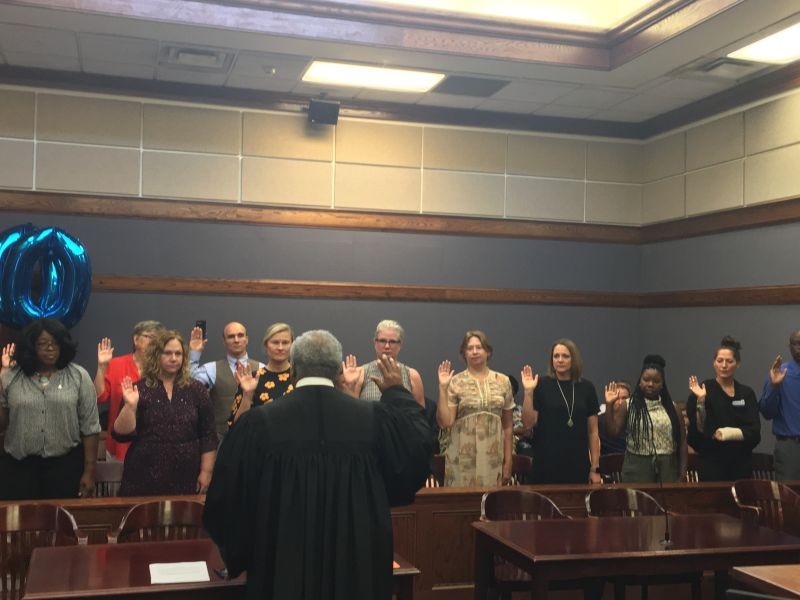 That sense of stability is at the heart of CASA’s entire mission. Volunteers stay with their child through their entire case in an effort to be a constant in their life, which has lots of different adults passing through.

“These are children who have experienced abuse and neglect and don’t have a constant adult who can care for them,” says Blair, “so we as a community have to step in and be that when the parents aren’t able to be.

In addition to supporting the children, CASA also supports the parents.

“It’s easy to make it seem like there are all these awful human beings that are parents,” explains Blair, “but what we see most often is that this is trauma that’s been passed down.”

Abuse tends to perpetuate itself. In CASA’s Family Treatment Court, which is an intensive court experience designed for parents with substance use issues, it’s estimated that 90 percent of the mothers have experienced sexual abuse in the past.

“They’re just treating their own trauma that’s gone untreated with substance use,” says Blair. “We as a community don’t do enough around mental health resources to address those kinds of issues, and if it goes untreated you find other ways to treat it, because you’ve got to be able to survive. And then, unfortunately, children are caught in that crossfire.”

The Family Treatment Court is eighteen weeks long and involves weekly reports to court and drug testing, parenting classes, and mental health treatment. By the completion of the program, the parents are ready to potentially regain custody of their children.

Still, even with CASA’s efforts, there are systemic challenges that compound the situations of families. Poverty is the main offender.

Savannah certainly struggles with subsidized housing, as Blair has seen firsthand in two of CASA’s young employees in the Individual Living Program. Aging out of foster care, they live in subsidized housing in Georgetown, which is on the Southside. They take the bus to work, but one bus ride takes 90 minutes, whereas a car ride takes under half an hour.

“We’re pushing all our subsidized housing out of downtown because we don’t want to see that,” says Blair, “so we’re making transportation less effective. It’s just those things that we don’t understand that make it really difficult.”

CASA is one of the organizations trying to help people understand the structures that work for and against us. In October, Blair helped write Deep’s first policy brief that has begun to create a ripple of sorts in the community.

“After this policy brief had been released, we’re talking about it in the nonprofit community,” she says. “We’re like, ‘What about our organizations?’ It’s about time that nonprofits are thinking about what kind of policies they’re going to advocate for. We have 100 volunteers, and those are people from all walks of life who are seeing firsthand how the system is broken. How do I now guide them to think about how we can fix the system?”

CASA is always looking for volunteers, taking donations, and encouraging anyone interested in fostering to do so. For more information on CASA, visit savannahcasa.org.