The soul of wit: Armstrong keeps it short and silly in Shakespeare tribute

ARMSTRONG State University is ready to pay tribute to the Bard.

Written by Adam Long, Daniel Singer, and Jess Winfield in 1987, The Complete Works storms through every last one of Shakespeare’s comedies, histories, and tragedies—that’s 37 plays in just 97 minutes.

Inevitably so. As the honoree himself once said, “Brevity is the soul of wit.”

In the original script, Long, Singer, and Winfield acted as themselves—three actors using their real names and playing themselves instead of specific characters.

In Armstrong’s production, JoJo Ward, a Theater major, Joey Timmons, a Music and Biology major, and Rayshawn Roberts, an Early Childhood Education major, will star as themselves in accordance with the script and speak directly to the audience.

“They are playing themselves, and the cast is allowed to do a lot of improv so they can make up and create their own world,” Goetz explains.

Irreverent and lightning-fast, the trio’s interpretation of Shakespeare’s work is riddled with sidebars, modern twists, and hysterical touches, and derailments. 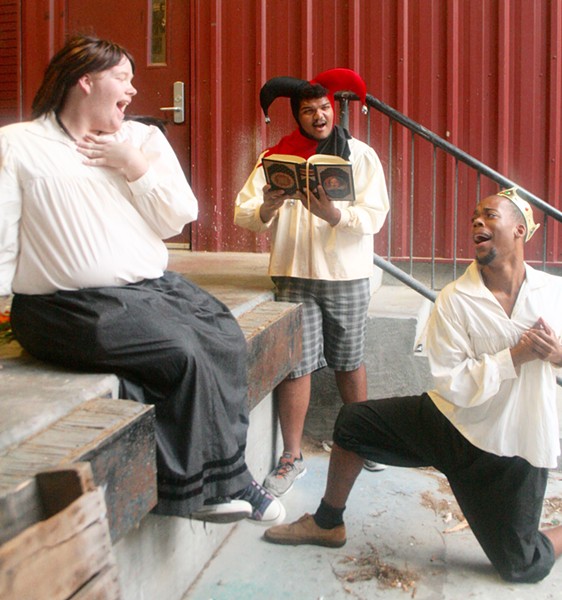 The trio follows their parody of the world’s most famous love story with a, er, revised version of Titus Andronicus, spinning the classic tragedy into a cooking show. Next up is Othello, told in rap.

“The second half is Hamlet, three ways,” says Goetz. “There’s a condensed version, then they do it faster, then they realize they have 30 seconds left, then they do the whole thing backwards!”

Talk about sharpening your acting chops.

“From a technical standpoint, it’s crazy,” continues Goetz. “We have full props and costumes that they have to change in and out of super-quickly. They literally have two seconds to put on a costume. We’re using scarves, wigs, vests, that kind of thing that can be taken on and off easily. There’s no backstage, mainly because, in the Black Box Theater, there are only two exits, so it’s hard for them to go in and out—they just change onstage!”

Whether you skimmed your way through Spark Notes to pass high school English or are a bona fide Shakespeare scholar, not to worry: The Complete Works is for everyone.

“Because Shakespeare is very accessible and even required in high school, I think high school and even younger than high school [students] will enjoy it,” Goetz says, noting that, being Shakespeare, there’s some innuendo and language that might not be suitable for younger audiences.

“They take big chunks we all know, like Romeo and Juliet, Hamlet, Macbeth, and they twist it, but some of the less well-known plays, that’s when they’ll combine them,” Goetz explains.

“People will understand the jokes because they know the shows; they read them in high school and college.”

Can’t get enough Shakespeare? Armstrong will also perform Desdemona: A Play about a Handkerchief this semester. Paula Vogel’s play follows the Venetian beauty of Othello in an imaginative continuation.

The semester wraps with Armstrong’s only original Shakespearean work, the beloved comedy The Taming of the Shrew.

From beginning to end, it’s sure to look at the world’s greatest playwright with admiration and love—no matter how skewed the lens.