OUTSIDE KEVIN BARRY'S on a chilly Thursday, Linda and Kevin Farley survey their favorite bar from across the cobblestones.

They live in Pooler, but they decided to come today for lunch for the last time.

“I don’t know where we’ll go now,” says Linda. “We only really ever come here.”

Theirs is a common story for many, who seek out Kevin Barry’s for its love of Irish heritage and military culture. 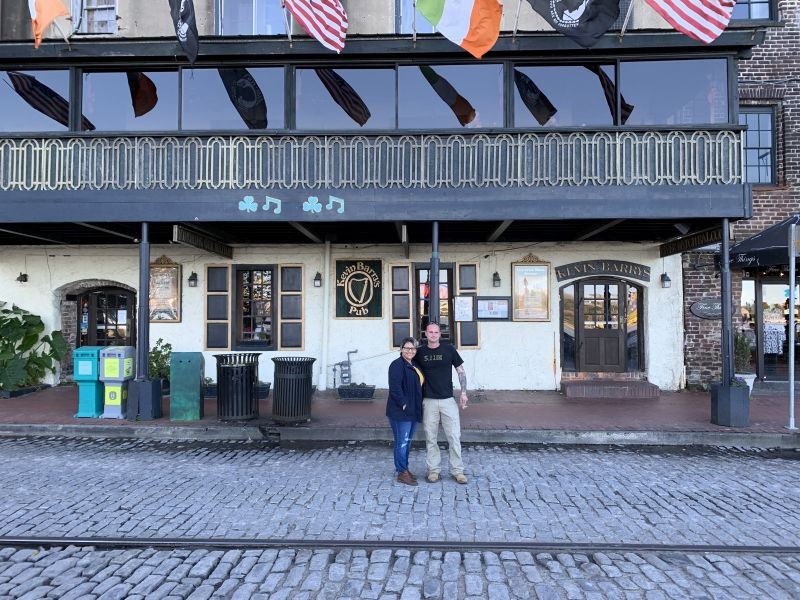 The announcement came as such a surprise that rumors began to fly. The real story is much less juicy: the owners of the building, who also own the Cotton Sail Hotel, decided to go another direction with the building. Owner Vic Power chose not to renew the lease and retire.

Kevin Barry’s has been a River Street institution since 1981. Before Power owned it, he owned a bar in the U.S. Virgin Islands for a while before coming to Savannah. A former serviceman in the Navy Reserve, he had come through the town years ago and decided to give it a go.

At that time, Emerson estimates it was one of the first Irish pubs south of Washington, D.C., and other bars like O’Flaherty’s in New Orleans followed suit. But Kevin Barry’s was always different.

“Vic added another dimension,” says Frank Emerson, who has performed at Kevin Barry’s since its opening.

“He brought an appreciation of the history and the culture of the Irish and Celtic world to Savannah. Not that they didn’t have an appreciation before—the [St. Patrick’s Day] parade is one of the oldest in America, and they have their societies—but Vic added a little more kind of authenticity.”

Even in the beginning, when Power wasn’t sure if he’d make any money, he made sure the musicians did. 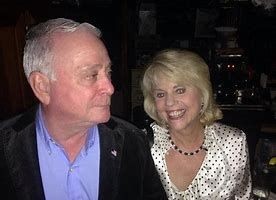 “Vic had music seven nights a week. Particularly in the early days, sometimes he didn’t have enough to pay himself, but he always paid the musicians,” Emerson remembers. “He just believed in it.”

As the bar grew in popularity, it became known for its live music. The Listening Room enjoyed a regular lineup of musicians, including Emerson, Harry O’Donohue and Carroll Brown.

Every single night, guests could expect to hear the finest Irish and Celtic music for free.

But now, Emerson notices that not only has authentic Irish music declined in popularity, listening to live music in general has trended downward as well.

“A lot of the pubs around the country have gone the way of just background music,” he points out.

“The listening room in Vic’s, that’s what made it stand out. This was a place you could be entertained with basically a series of mini concerts over the course of an evening. There used to be a lot of places like that throughout the country, and they stopped doing it for one reason or another. Maybe it’s the times, maybe it’s the proliferation of cell phones and all that.”

Emerson lives in Virginia but would travel nearly nine hours, one week a month every year since 1981, to perform at Kevin Barry’s. Now he’s not sure where, or if, he’ll play in Savannah.

“As they used to say, at the moment, I’m at liberty,” he laughs. “We’ll see what happens down the road a little ways.”

Power’s love for Irish music helped keep the bar as authentic as possible. In 2016, Kevin Barry’s was awarded the prestigious honor of being the most authentic Irish pub outside Dublin, according to Irish Pubs Global Federation.

“We were all tickled with it,” remembers Emerson. “We all wrote things to send them to try to talk them into it.” 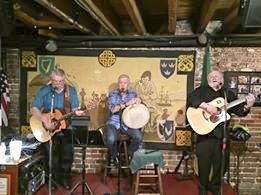 One can’t help but to feel a little cynical about the loss of the most authentic Irish pub in the world to more development on River Street, but that seems to be a common trend, especially in the case of Tara Feis, for which the City cut funding in 2018.

Since its inception in 1991, Tara Feis was largely considered a family-friendly alternative to typical St. Pat’s debauchery, and it included more traditional aspects of Irish culture that were foregone for green beer in the City’s festivities. Then and now, tourism wins out over tradition.

Of equal importance to Kevin Barry’s story was the military culture it promoted. The bar was named one of the top ten military-friendly bars in the world.

“Vic wouldn’t have it any other way,” says Emerson.

Power’s respect and admiration for the military was unwavering. In 1981, the anti-military sentiments were strong, but Power bucked that norm.

Upstairs, the Hall of Heroes museum tells the stories of the men and women of the armed forces. Right inside, the Missing Man Table is stacked full of bar napkins with notes that commemorate fallen loved ones, and framed photographs line the walls.

Fortunately, the memories upstairs won’t fall by the wayside.

“All the pictures of the fallen are being returned to their families, and the portraits and paintings are going to be given to the appropriate military and civilian units they depict,” says Emerson. “They’re not going to get thrown away.”

It’s clear that Power has created a place for sharing memories. Emerson tells the story of Sgt. Jon Peney, a young medic in the 1st Ranger Battalion who frequented Kevin Barry’s.

“He was very young. You wouldn’t expect somebody that young to dig the music we were doing, but he did, and of course he loved the place because of its military connotation,” Emerson recalls.

While deployed in Afghanistan, Peney was killed in action on June 1, 2010. In his will, Peney requested that the funeral end with a celebration at Kevin Barry’s. Emerson, saddened by Peney’s death, still wears his friend’s memorial bracelet.

A few years ago, Emerson wrapped up his set and sat alone in Liberty Hall. A few Rangers came up and asked him about his memorial bracelet, and Emerson showed them that it was for Peney. To his shock, one of the Rangers held out his hand to show that he, too, was wearing a bracelet for Peney.

“He was asking me how I knew him, and he said, ‘I was his platoon leader, I’m the one who gave him the order to go up on the roof that got him killed.’ Peney died in his arms,” says Emerson.

Stories like that abound at Kevin Barry’s. Emerson also shares one of Corey Goodnature, a helicopter pilot who was killed while trying to rescue a SEAL team operation. (If the story sounds familiar, it’s the plot of the movie Lone Survivor.)

Goodnature and his wife had met at Kevin Barry’s, as Emerson says many couples did. One day, Emerson noticed a woman toasting to Goodnature’s picture, which hangs in the bar.

The woman looked familiar to Emerson, so he went over to her. Sure enough, she was Goodnature’s widow Lori.

“That’s not the end,” Emerson says. “She met her next husband at Kevin Barry’s as well, and he knew Corey too.”

He pauses. “Sorry, I’m getting a little choked up talking about it. He knew Corey and made Kevin Barry’s his place, too.”

When Kevin Barry’s closes its doors for the last time, it’ll leave a gap that will prove difficult to fill.

“It’s basically two generations,” says Emerson. “He set the roots there and it took over for a long time. It is a piece of Savannah history, though more recent, and it’s kind of gone away. Granted, it’s not a monument or anything, but in many ways I think it kind of is.”

Irish pubs themselves are beginning to drift away, marking the end of an era.

“There was a heyday for them back in the 70s, and just like the Big Band era, it’s kind of dissipated. They’re still there, but they’re not the same at all,” says Emerson.

“There was a singer back in the 40s, Helen O’Connell, and she was asked, ‘What was it like to live through the Big Band era?’ She said, ‘Well, if I had known it was an era, I would’ve paid much more attention.’ So Kevin Barry’s, it was one of a kind and will always be one of a kind. It was its own era. There won’t be anything like it—there can’t be.”

Stop in to Kevin Barry's during regular hours until Dec. 31. On New Year's Eve, general admission is $20 and pre-booked tickets for the Listening Room are $50.