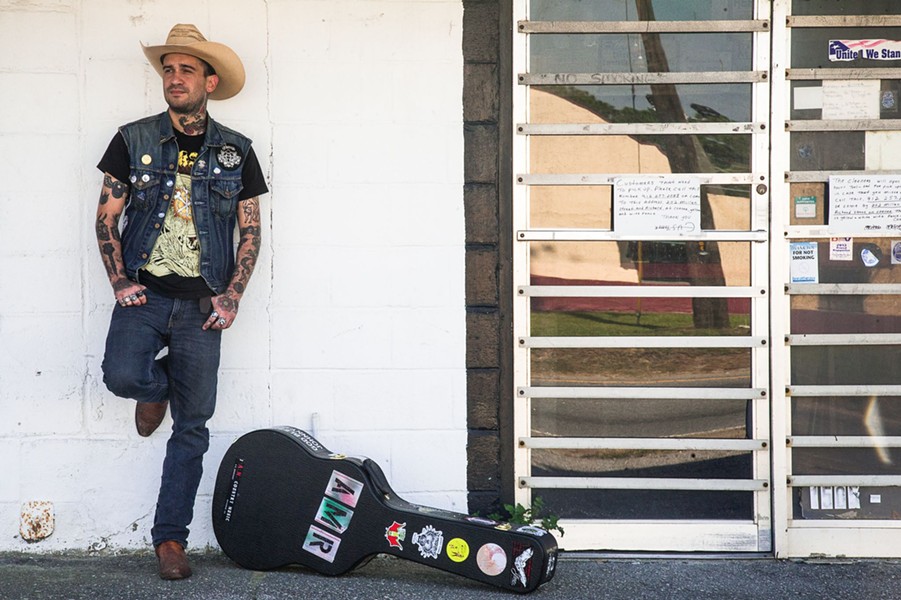 FROM HIS weekly Jinx happy hour to Trinity Sanctuary Concerts, A.M. Rodriguez is a constant in Savannah’s country and singer-songwriter scenes. Despite his hard-gigging schedule and outpouring of original work, the Texas-by-way-of-Pennsylvania transplant hasn’t committed those original tunes to tape—until now.

Rodriguez has released a song here and there and has work included on compilations like Furious Hooves’ Stay Rad SAV all-Savannah mixtape, but “Dead Dogs and Dried-Up Dreams,” a forthcoming EP, is his first dedicated, official release. Red Flag Records, a DIY venture that primarily distributes punk and metal tapes, will release the debut. A country release in a sea of heavy stuff? Sounds strange, but Rodriguez’s history with the label and punk roots make it a sensible addition to their roster.

“They started out as a zine and chapbook,” he explains. “They published some of my poems years ago.”

“Dead Dogs” is a solid introduction to the seasoned Savannah player. Lean, imperfect, and raw, the tracks were recorded by The Train Wrecks’ Jason Bible in his home studio. 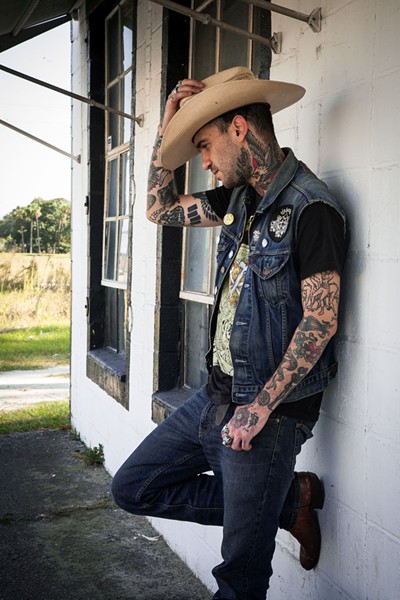 “It’s a somewhat hallucinatory story song I started when I was 18 or 19,” he says. “I think I called it ‘Small Town Family Blues.’”

He sat down with the skeleton of the song and added a few more verses—the first new material he’d written in months.

“I was having trouble with the chorus and hook, so I showed it to Jason to see if he had any thoughts,” Rodriguez recalls. “He liked it and added to it, and it made the song way stronger.”

The results of the collaboration is now the title track, “Dead Dogs and Dried-Up Dreams.” A quietly, darkly beautiful portrait of a fictional family, the song is Rodriguez at his best: the vocals are vulnerable, the dark narrative reads like transfixing fiction through the speakers, and subtle production flourishes spin a melody that makes one’s hair stand on end.

While many tracks are bare, one-take wonders, “Dead Dogs” employs piano and Omnichord, an electronic autoharp straight out of the ‘80s. The Suzuki instrument features a touch plate that is “strummed” to produce delicate, pixie-like strains. The bright, twinkly sounds on their own seem like they’d fit best in a vintage video game, but peering through Rodriguez’s rasp, piano swells, and guitar fingerpicking, it adds an elegant magic.

“The Omnichord was the first thing we added,” Rodriguez says. “I wanted some weird, spacier stuff, and Jason said, ‘I got this thing, it’s a weird Peter Gabriel thing.’ I said, ‘I’ll try it’—then I wanted to put it on everything!”

As “Dead Dogs” fades and track two cues up, the EP gets more personal.

“’Melissa’s Song’ is one of those between truth and fiction,” Rodriguez shares. “’Breakdown’ is, straight-up, a tale of a massive breakdown I had driving to Atlanta, trying to go see The Devil Makes Three and stay at my old drummer’s house. I ended up in Dublin, sweating out alcohol withdrawals, was pretty sick for a few days. That leads into the last song, ‘Sundays’—and that one’s just a straight-up song about a breakup and problems with alcohol abuse.”

Things take a fictional turn once more with “Deliah’s Mother’s Blues,” Rodriguez’s nontraditional take on the traditional country form of a murder ballad.

“Instead of the usual perspective, which is a guy shooting a woman down for perceived or actual infidelity, it’s the story from the mother’s point of view on a tremendous loss,” he explains. “I’d say I could imagine it—I did for a song!—but I could never fathom that. But that’s what songwriting is: trying to wrap your head around stuff like that. When I perform it, I’ll get some of that emotion that’s hard to capture.” 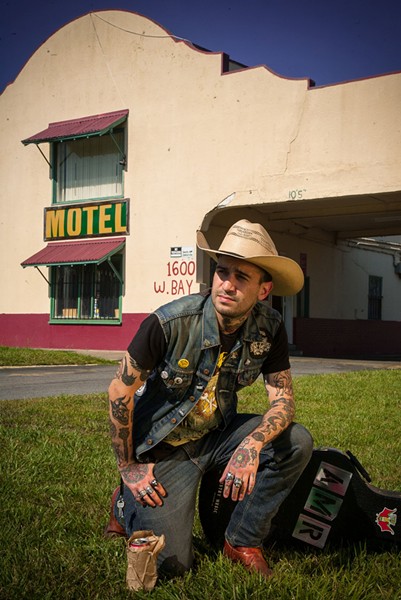 Rodriguez looks forward to recording new material on a recently acquired four-track tape player. With the recording device’s limitations, he sees an opportunity to focus on songwriting and structure, finding inspiration in the way his hero Bruce Springsteen album Nebraska. The Boss entered the studio with ten strong but sparse demo recordings; he planned to track full-band versions with The E Street Band, but ultimately decided the raw, haunted sound of the demos revealed those songs’ true strength.

“It speaks for itself,” Rodriguez says of that album. “That made me want to mess around with really limiting things.”

Though he’ll strip it down in the future, the singer-songwriter has assembled an all-star cast of local musicians, including Veronica Garcia-Melendez and David Murray of Street Clothes on piano and drums respectively, Coy Campbell of Nightingale News on bass, and Susanna Kennedy on violin, to perform at his album release show.

“We’ll start off the set full-band, they’ll take a break, I’ll play a few of the quieter songs,” Rodriguez explains. “This show actually started off with my brother, who plays in Dead Oak, wanting to set up a show with Megan Jean and the KFB. This date worked perfect for the album release, then we got Brandon Nelson McCoy, a songwriter who moved back to Savannah, too—great stuff, he’s a really solid singer-songwriter.”

The limited run of cassettes will be available at the show and include illustrated printed lyrics on the back of the cassette’s J-card.

“You’ll get something tangible along with the music,” says Rodriguez.

The debut’s been a long time coming, and Rodriguez is pleased to finally release a collection of his original work.

“I think it’s the perfect release for fall, coming up on winter; there’s a lot about seasons changing. That’s the time of the year I like,” he reflects.