All who love good writing must converge

The annual celebration of Savannah’s favorite literary icon brings out all manner of charming weirdos to Lafayette Square for an afternoon of unorthodox family fun.

But even more interesting personalities are between the pages this year as Savannah’s compelling cadre of local authors joins the party.

While The Book Lady has hosted local writer events at her eponymous Liberty Street shop, she saw a fine opportunity to “piggyback” on what would have been Ms. O’Connor’s 90th turn around the sun.

“I had the idea to make it bigger, better, and more publicly visible in order to give these authors and the local writing scene more deserved exposure,” says Saxon-Giusti, who sees the constant challenge that even successful, published writers have in keeping their books in front of the public. The hypercompetitive “bestseller” climate created by the publishing conglomerates doesn’t help.

“Big box and internet booksellers overlook and under-promote the majority of good writing, so it’s up to independent booksellers to discover and advocate for them.”

“Part of the mission of the Childhood Home is to promote Flannery O’Connor’s work and the love of reading in general, and this adds another interactive element to the whole event,” says Powers.

In addition to his musical duties as saxophonist for the Sweet Thunder Strolling Band, Powers will also be selling copies of The Black Warrior Review, to which he has contributed several short stories.

“The idea is to bring out people who might not attend a literary event or read the New York Times’ Review of Books...which is almost everyone,” he adds drily.

It may be true that appreciation for good literature has suffered a decline everywhere, but Savannahians still seem to love their tales and tomes. For Tina Whittle, that adoration appears inherent in the city itself.

She agrees that no matter what the genre, celebrating local authors and writing itself is in keeping with Flannery O’Connor’s legacy.

“She’s been an enormous influence on me, especially my crime writing. Reading her work is a master class in motive and character and the precisely observed detail,” she says.

“Her work is fertile ground for any writer interested in exploring the strangely familiar—or the familiarly strange—of the Southern landscape.” 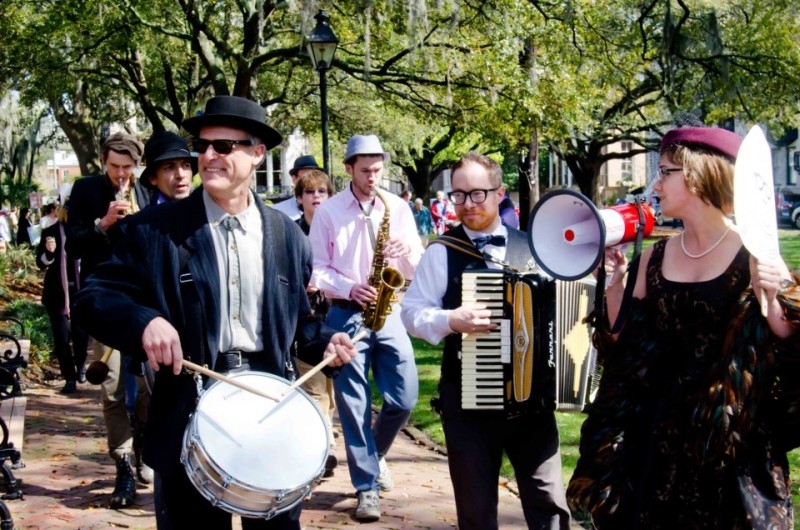 It doesn’t get stranger or more delightful around here than this Sunday. Saxon-Giusti points out that the independent book fair not only adds to the charm of Flannery’s parade, but also offers an important opportunity to connect writers and readers.

“We must find and support our local authors who deserve a wider audience, not only to enhance our own communities, but to give their art a fighting chance,” admonishes the Book Lady.

“Amazon ain’t gonna do it.”