A tale as old as time: Savannah Stage’s Beauty and the Beast

Star and company co-founder Wesley Pridgen chats ahead of opening

WITH Savannah Stage Company, you can always expect a unique show—even when it’s one that is a major part of the history of stage and screen. That’s what audiences will get with the company’s production of Disney’s Beauty and the Beast, opening on Nov. 15 at Service Brewing's performance space.

The show, which will run for two weekends, features some of the most talented actors Savannah has to offer—including Savannah Stage co-founder Wesley Pridgen. Pridgen, a veteran of the stage, plays the role of Gaston and brings a new layer of imagination and depth to the part.

Ahead of opening night, we spoke to Pridgen about what it’s like being part of the production, and what audiences can expect.

I was thinking about something that I’m interested to get your perspective on—when you go into a play like this, which is one that a lot of people are familiar with through various mediums, are there still things that surprise you or feel new about the role or story?

In general, as an actor, there are several plays that I’ve done multiple times in my life. And every time I do it, it’s your job as an actor to find something new in it and to grow. The first time I did this show, I was in high school and I played the beast. At the time I was much younger, and I didn’t know much about the world. Especially in terms of acting, I wasn’t quite as studied back then, I guess you could say.

Another time I did it was at the Barter Theatre, and I worked backstage. That was more a challenge of being able to do it on such a massive scale. There were at least 30 people in the cast, a whole backstage crew, we’re moving in drops—it’s the entire spectacle that you’d expect.

With our production, I’m finding it a lot more difficult than previous times I’ve done it because we’re approaching it with more imagination and less spectacle. I’m getting to look at it in a different way, because we don’t have all of the same sets and costume pieces—we’re approaching it more with action, in the Savannah Stage Company style that we do.

It’s definitely a different approach and a whole new experience.

Do you feel like that gives you a new appreciation for the story?

100 percent! I think with every show that I do, there’s always some aspect of finding a new piece of gold—even if you’ve done the show a hundred times. I’m friends with an actor who’s been doing Book Of Mormon for the past six years, so you can imagine that when you do a show for that long you have to find some way to grow [in the role].

It’s a constant experiment, which is so fun.

Is the vibe of a particular night also dependent on the audience and how they’re reacting or interacting with the show?

That’s not necessarily how I approach it. In our philosophy, it’s our job to give 100 percent of ourselves to this play. However the audience receives it is their own experiences. You’ll go to a lot of places that are like, “That was a bad audience.” That doesn’t affect us. What that tells me is that if people aren’t reacting a certain way, I’m not doing my job well enough to give them a reaction.”

We’re here for the audience. If I do my job well, then hopefully they’ll respond in whatever way they feel! 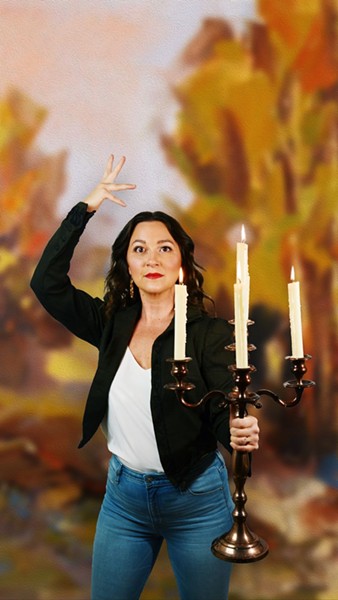 Do you have a favorite moment or musical number in this production?

I love all the songs in this play! I’ve found a new appreciation for the song, “Human Again.” It’s sung by all of the enchanted objects in the castle during the second act. Our choreographer, Io Ermoli, has been incredible to work with. She’s given us choreography that challenges us in a way because it’s difficult enough to keep us working hard, but simple enough to look beautiful. It’s been a very fun process.

Savannah Stage has become known for their “Pay What You Can” policy at performances. Why, as a co-founder, is it important to you to make theater accessible in that way?

I think there are a lot of different answers to that question. The simplest one is that it’s our basic value to be accessible. There have been a lot of times in my own life where friends will say, “Hey, let’s go see this play.” And I’m like, “I would love to see this play, but I can’t really afford to spend $30 or $40 for a ticket.”

When we first moved here and opened the company, I was fresh out of college. None of us knew anyone, and we didn’t have any money. Just living here over a short amount of months, knowing that there are a lot of students in town and people in our range in terms of not being able to afford to see and do things—that’s a huge thing for us to be able to be accessible to people without having to worry about how much money they have. We’ve had a homeless man walk into our theater before and pay 28 cents to see a show. To be able to offer that for somebody, you can’t put a price on that.

This time, on the Sunday performance, we’re going to have a “Pay What You Will” show. You’ll come in, have a seat, see the play, and then after it’s over you’ll pay whatever you think the play is worth. It’s a way for us to kind of see what our audience thinks our productions our worth.