TO THOSE who love rivers, marshes and the sea, Georgia’s most magnificent beauty and bounty lies in its southeastern region.

This unique and fragile environment is home to a multitude of plant and animal life and a web of interconnected waterways as well as structural support against storm surges. It also provides significant economic contributions through tourism, recreation and commercial food sources. 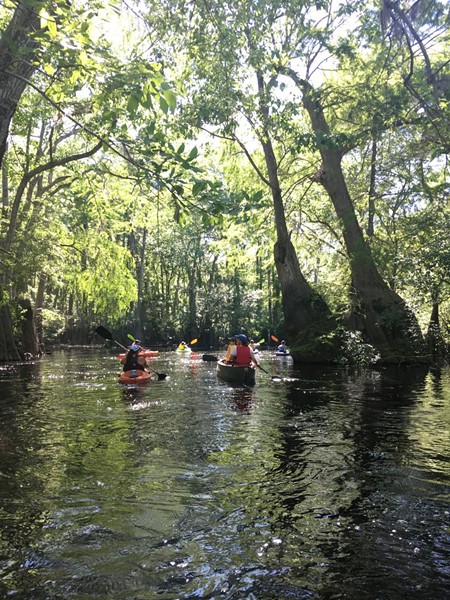 At odds with its obvious ecological and economic importance, Southeast Georgia is under constant threat from industry and development that destroys its habitats and discharges toxic waste into its streams and rivers. State and federal administrations continue to favor these polluters as the effects of climate change endanger quality of life for all.

In spite of the looming disasters, there are bright spots, thanks to the valiant efforts of conservation groups and concerned citizens working to protect the environment.

Let’s start with the good news:

The Georgia Barrier Islands, the 100 mile-chain of that includes Tybee, St. Simons, Cumberland and a dozen other islands, has been designated a “Landscape of Hemispheric Importance” by the Western Hemisphere Shorebird Reserve Network (WHSRN).

A stopover ground for an estimated 30 percent of the world’s population of endangered red knot rufous, the extensive sand dunes, salt marshes and mudflats of these islands provide shelter and sustenance for the birds that continue on to South America each winter migration.

The area also hosts significant biogeographic populations of the American Oystercatcher, the Short-billed Dowitcher and the Black-bellied Plover as well as one of the largest spring gatherings of Whimbrel in North America.

“Georgia’s 100-mile coast has been a safe place for shorebirds to refuel and nest for hundreds of years,” says Alice Keyes, Vice president of coastal conservation for the non-profit organization 100 Miles.

“This designation not only recognizes our communities’ commitment to conserving these valuable species, but is also a draw to eco-tourists looking for a world-class birding destination. We are excited to continue to work with the Georgia Shorebird Alliance and our partners to enhance protections to the shorebirds that depend on our vast landscapes for their survival.”

While the designation does not come with enforceable protections, U.S. Senator Johnny Isakson called it “another strong endorsement for Georgia’s beautiful coast and will help keep conservation efforts top-of-mind in the area.”

At odds with his purported support for the environment, Sen. Isakson also endorsed climate change-denier Scott Pruitt as administrator for the Environmental Protection Agency (EPA).

Speaking of the EPA, the federal agency made this year’s list of Georgia’s worst environmental offenders—twice.

The seventh annual Dirty Dozen report calls out the most egregious polluters and toothless political pantomimes affecting the state’s water quality and quality of life for its citizens, courtesy of the passionate watchdogs of the Georgia Water Coalition (GWC).

Cited for its efforts to gut the Clean Water Act and its delay in implementing new rules limiting coal-fired power plants from spewing mercury, arsenic, lead and other toxic chemicals into the nation’s waterways, the EPA appears to be holding fast to a deregulation, industry-friendly agenda under Pruitt’s leadership.

“The thing to remember is what happens in Washington really does affect us here,” reminds Joe Cook, GWC representative and Advocacy and Communication Coordinator for the Coosa River Basin Initiative. “The rollbacks of clean water protections benefit the polluters and are at the cost to Georgians.”

Also among the Dirty Dozen are Georgia Power’s Plant Vogtle in Augusta and the Rayonier Advanced Materials pulp mill in Jesup, which has made the list every year for its regular discharge of foul-smelling, discolored effluence into the Altamaha River.

Closer to home, the Chatham County landfill operated by Waste Management Superior was named for its acceptance of highly-toxic coal ash waste despite its proximity to wetlands and streams that feed the Little Ogeechee River.

The natural gas liquefaction plant currently being constructed on Elba Isla also made the list, tagged for its high risk of chemical runoff into the Savannah River and potential clashes with container ships.

“The possibility of explosion at that facility is very real,” says Cook.

An update to the biological opinion connected to the Savannah Harbor Expansion Project (SHEP) increases the limits for green sea turtles killed by the dredging from three to 16.

Dated Oct. 13, 2017, the amended report by the National Oceanic and Atmospheric Administration Fisheries Service also ups the “non-lethal” takes of the threatened species from three to five and quintuples the lethal take of the similarly-threatened Atlantic sturgeon, from five to 20.

The non-lethal takes—which involves capturing and moving the sturgeon out of the way of the hopper dredges—increased from 23 to 195.

“Observations from lethal and non-lethal encounters indicate the populations of these species are much more robust than originally estimated,” writes Billy Birdwell, Senior Public Affairs Specialist with the Savannah District U.S. Corps of Army Engineers, which is executing the project. “This led to an increase in the limits.”

The updated opinion also includes a revision on the timing of the construction of the proposed fish passage around the New Savannah Bluff Lock & Dam that would allow Atlantic and shortnose sturgeon to access spawning ground near the Augusta Shoals and above the Thurmond Dam. Previously, the dredging of the Savannah River’s inner harbor had to wait until the fish passage was complete; the new timeline allows for the inner harbor dig to begin while stakeholders decide on the best solutions for the displaced fish.

The deepening of 39 miles of the Savannah River from its current 42 feet to 47 feet was first proposed in the 1990s to meet the demands of the global shipping industry and began in 2015.

State and federal funding were supposed to combine to meet the original price tag of $706 million, more than half of which was earmarked for environmental mitigation, including the aforementioned fish passage and a freshwater reservoir in the likelihood that the tidal momentum caused by the deepening will render the City of Savannah’s water supply too salty to drink.

The state of Georgia has already put up $266 million; the federal dollars have yet to show up. The project is now estimated to cost taxpayers $983 million.

After hearing from dozens of Effingham County citizens over the last few weeks, the Springfield City Council voted unanimously on Nov. 16 to deny DRT America’s request to dispose of more than 56,000 gallons of pre-treated waste through the city’s wastewater facility.

Built outside of Springfield city limits, the $43 million plant is out of the jurisdiction of the city’s zoning, codes or permitting processes but requires use of the publically-owned utility.

The French-based company obtained the necessary building permits from the county and has already constructed the $43 million turpentine plant, which is meant to process crude sulfate turpentine—itself a waste product from paper mills that can carry a noxious odor—for rosin, adhesives and other products.

Several residents have reported smelling fumes during the facility’s test runs this fall.

The potential toxicity of the plant’s discharge through the city’s treatment plant has caused concern that it could sully nearby Ebenezer Creek, a pristine tributary of the Savannah River known for its tannin-colored waters and thousand year-old cypress forests. It is also the historic site of the tragic drowning of hundreds of freed slaves in the aftermath of General Sherman’s March to the Sea and considered a natural and cultural treasure.

Thursday’s decision, however, is not the final word on the future of the creek.

“The City of Springfield should be commended—the mayor, the council, the staff—for doing what they’ve done, and everyone who submitted comments and spoke up at the hearings should be thanked,” says Friends of Ebenezer Creek organizer Lewis Taylor, who first surveyed the landmark for the U.S. Park Service in the early 1970s.

“That said, this is just a hiatus. The plant is still there, and DRT isn’t going to pack up and go away.”

The company lists “protecting people, preserving the environment” as its top priorities on its website and lauds its bacteriological treatment platform, but doubts persist that it can keep toxins out of Ebenezer Creek.

“If they are as environmentally sensitive as they claim to be,” continues Taylor, “then they need to look beyond best practices and to the best available technology so that nothing is going into that creek but water.”