A folk explosion at The Lucas Theatre

JOHNNYSWIM, Drew Holcomb & The Neighbors, Penny & Sparrow collaborate onstage and on the record

THE Goodbye Road tour is ready to say hello to Savannah.

On July 10, folk luminaries Drew Holcomb and the Neighbors, JOHNNYSWIM, and Penny & Sparrow bring a unique evening of collaborative music to The Lucas Theatre.

The bands have been friends for some time - Amanda Sudano of JOHNNYSWIM went to high school with Holcomb’s wife, Ellie - but when the finally spent quality time together at Holcomb’s annual Moon River Festival, their musical chemistry became palpable. 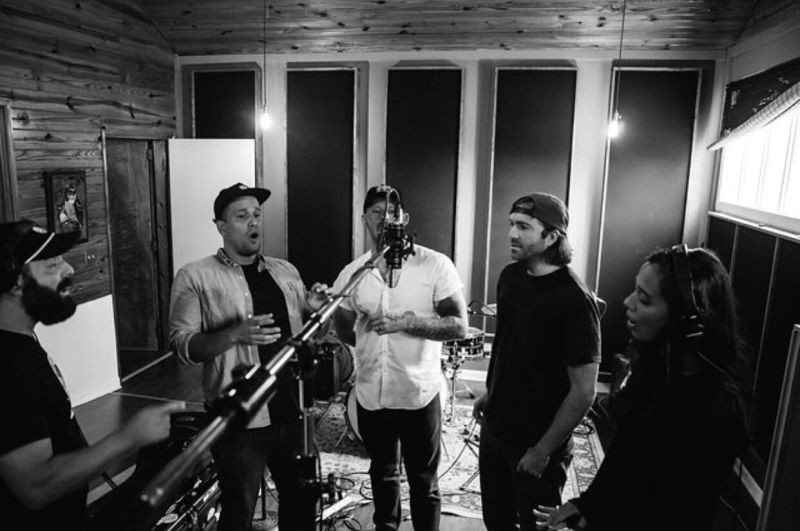 “We talked about potentially doing some shows together,” Holcomb recalls. “Then we decided that if we were going to do that, maybe we should write a song together. I had some free time later that summer so I flew out and spent time with them at their house in L.A.”

The collaboration was a change-up for both bands, who have their own unique ways of penning new material.

“Sometimes, we set aside time to play chords, listen to old Voice Notes,” says JOHNNYSWIM’s Abner Ramirez. “I’ll say the funnest times is when you feel like you have to get a song out of you or it’s just going to fester and die. An honestly, this entire ‘Goodbye Road’ project has been like unlocking a gate in our chest, cracking the door open, and the songs flowed out of us in a flurry. It’s been so much fun. Typically, in making our own JOHNNYSWIM album, we might be going right into the studio with songs we wrote 10 years ago that I’d forgotten about and Amanda’s been fighting for. But ‘Goodbye Road’ ha just been an outpouring of passion.”

“It was really a pretty powerful and intense time,” Holcomb recalls of the collaboration. “It was 48 hours after the white supremacy rally in Charlottesville...there was a lot going on in our minds.”

“The guys had lunch while I was at home with our little one, then they came home and we sat in the kitchen and talked about what was going on in the world and what we were going through,” Sudano remembers. “We had it all on the same page over lunch and drinks, then we went upstairs to our little studio to write, and it just seemed so easy. It had the feeling of the similar ways of what was going on in the world and parenthood...it was just the easiest project. It just felt right and clicked from the beginning.”

Before releasing the EP ‘Goodbye Road,’ both bands have been racking up accolades of their own. JOHNNYSWIM has been around since 2005; their 2016 recored Georgica Pond debuted at #13 on Billboard’s Top Current Album Chart, #35 on the Billboard Top 200, and #4 on iTunes’ Top Albums, and #1 on iTunes’ Singer-Songwriter charts.

Their song “Home” is the theme song for HGTV’s Fixer Upper, and the group has appeared on programs like The Tonight Show, Late Show, Late Late Show, Today, and more.

Drew Holcomb and the Neighbors began in the mid-2000s after Holcomb performed as a solo artist for some time. Their 2008 record Passenger Seat reached No. 3 on the iTunes Singer/Songwriter chart, and 2011’s Chasing Somedaymarked the bad’s first appearance on the Billboard charts. Their most successful record to date, Good Light, was released through their own imprint Magnolia Music. Over the years, the band has toured with the likes of Ryan Adams, Susan Tedeschi, Needtobreathe, The Avett Brothers, and more.

Holcomb, Ramirez, and Sudano wrote two songs while in L.A. When he returned home to Nashville, Holcomb wrote the tune “Just A Memory” with the band Penny & Sparrow.

“We talked about recording the Penny & Sparrow guys and said, ‘Hey, what if we record this with JOHNNYSWIM and y’all come and sing on it?’” Holcomb says.

“They thought it was a great idea. We booked time in the studio, and it happened to be the day after the Vegas shooting at the country music festival. The next day was the day Tom Petty died. We recorded most of the first three songs and ‘Ring the Bells,’ and I thought it would be great to have a fourth song.”

It was the perfect opportunity to pay tribute to Petty.

“I recorded a stylized version of “I Won’t Back Down” and recorded it in an hour,” Holcomb explains. “It also sort of thematically felt appropriate with the other songs...’I Won’t Back Down’ says, ‘We’re going to stand up together and say something.’”

Losing Petty was difficult for Holcomb, who was deeply influenced by the legendary performer.

“It felt like losing an older brother or uncle,” he says. “We make music for a living, and to find yourself in the family tree of certain artists...I’d seen him three or four months before at Red Rocks. For me, it was like me telling Tom Petty, ‘I came in, I’m going to miss you, and I’m not going to back down, either. Thanks for paving the way and making music in a world that tears people apart and shining a little light.’”

In celebration of the release of ‘Goodbye Road,’ JOHNNYSWIM, Drew Holcomb & The Neighbors, and Penny & Sparrow have a very special live show planned for their fans.

“Penny & Sparrow will open and do their own set, then it’s JOHNNYSWIM, then the Neighbors,” Holcomb explains. “We’re all sharing one band. We’ll come onstage all together, play some songs. It’s going to be a really cool, two-hour collaborative set, with all the songs from the EP, but we’ll also be singing together on each other’s older music.”

“We love Savannah,” Holcomb adds. “It’s a great town, and I’m looking forward to be there and am honored to be at the Lucas Theatre.”

The Lucas Theatre for the Arts