OHIO native Shayla Wigand is nearing the end of her time at SCAD in the midst of an unusual quarter, to say the least.

Wigand’s painting and monoprint work is inspired by her relationship with God and being a born-again Christian. The themes she communicates are subtle in their presentation, and its abstraction mirrors the way Wigand says it feels to most people to have a relationship with God.

We caught up with Wigand last week. 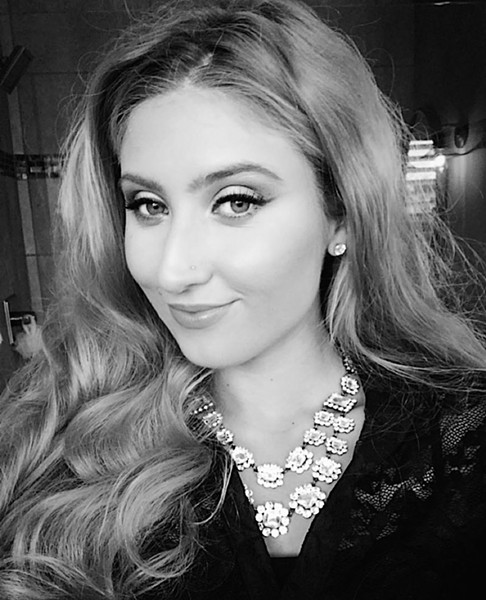 It’s definitely nothing like I thought it would be; I definitely had a lot more plans! I was kind of banking on this because I knew I was only going to be in one class, my exhibition class. I was like, “Okay, I’m going to really get into the print shop, take advantage of all the laser cutters and experiment.” Obviously I can’t do that.

But it’s been good. I’ve been working a lot. It’s a good period where I can learn how to get out of school and be a little more independent. So in that way, it’s been beneficial. I’m rolling with it.

[SCAD] just sent me a package in the mail. It was like a little party-planning package, with confetti, a hat, all this stuff! I was shocked. It was so inventive.

2. Tell me more about the body of work you make.

The majority of the work I’m working on right now is that transition period from a couple months ago, before coronavirus started to now. A lot of my work just focused on my relationship with God and really just being a born-again Christian and figuring out faith, figuring out how to walk and trust God and figure out who he is. A lot of my work currently has been focusing on the elements of eternity, especially because I’m getting married this summer, so I’m thinking about the covenant structure that we have between man here, but the covenant structure we have between God eternally.

It’s this weird parallel that I’m investigating through different symbols, like the rainbow is a really prominent symbol that represents covenant. The diamond represents loyalty. I’m just investigating those symbols and doing a little bit of video work with large-scale paintings.

I grew up thinking God was just a form of religion and there’s nothing to that—you just claim it or don’t. But as I went through my life I had a lot of struggles, I had a lot of depression and anxiety, a lot of problems at home with my mom’s boyfriends; they were pretty verbally and a little physically abusive. It was this pattern of men and a father thing, too—I never saw my dad since I moved to Ohio. God being father to me was like, what is that?

I met a group of girls who were Christians and they were talking to me and I thought I knew all about it. Eventually, I got to a really low part in my life where everything they poured into me—“God loves you,” “if you ever want to call on God, you can call on him”—I was so desperate I needed to.

From there, it was learning who God is and developing a relationship. Not just what people tell me, not just what strangers tell me, but who is God and how much does he love me, and let me figure that out.

3. What’s the reasoning behind this work being abstract?

I think when people think of Christian art, they think of 20th century, 18th century paintings, murals, all that stuff. What I'm really tapping on is what I feel speaks the most about who God is. It's a really abstract language because to a lot of people, the thought of God is very abstract. It's hard to comprehend a God who loves them, who wants to be with them, who cares about and forgives them, who can walk through pain with them. I think the only way to demonstrate that and materialize that is in the language of abstraction. I think that's why I picked that direction.

It shows that I’m not making this work with an agenda to shove it down your throat. I’m making this work to practice my own faith, but also share that faith, and sometimes that can be absorbed without people even realizing it.

I believe that what I create in these paintings is created in a time when I’m worshiping God, and I feel that a painting holds how it was created, where that creation took place. I think a painting really holds that deep within it, and when you put in in a space, depending on how it’s made, it can really transform that space, whether people realize it, feel it, know about it, or anything else.

4. How did you get started doing monoprints?

I love monoprinting! I took a printmaking class. People never really told me to take it; usually people that do photography or a lot of realism take printmaking. But I was like, “I’m just going to take it.” I was trying to find my way in printmaking, and I was taking an intro class doing a lot of little drawings of flowers and things they told me to. At the end, we could do whatever we wanted, and that’s when I was like, “Hmm, I’m going to experiment a little bit.”

We never learned about monoprinting, so I never learned the right way to do it, but I just bought a board and took some ink and some of the chemicals and started playing around doing these prints. My professor walked in after hours and was like, “What are you doing?” I was like, “This is going to be my final project.”

I technically don’t do it the right way, but I learned my own way and I have to stick with the process and it’s something I really fell in love with. It’s the type of printmaking that works for me.

5. What are you working on now, and what’s next for you?

I’m creating a couple things. I’m still on God’s faithfulness, but I’m in a period of also working on transition, the literal meaning of transformation and transition and whatever that looks like in my faith. Thinking things were going to look a certain way and now they’re not and being okay with that. I’m doing a lot of drawings and I’m getting a lot of work together.

Depending on where I go, I’m sure that will change a lot of my work. Stepping into marriage itself is really, really going to transform my work too, so I’m really excited about that. I’ll probably go deeper into the covenant series and what that looks like. That’s where I see my work going, but you never know.