After graduating from SCAD in 2018, painter Morgan Adler headed to the Netherlands for a residency just outside Amsterdam.

As it turns out, the themes she encountered then—isolation, captivity, reflection—are relevant again thanks to the age of social distance.

Adler’s move into landscape painting is a departure from her figurative works, but the result is a beautiful body of work that allows the paint itself to take the lead.

Adler is also the owner of The Space Between Gallery, which she runs literally out of her home: when an exhibition space is needed, Adler clears her studio and lets another artist take over.

We spoke with Adler last week.

1. What are you working on right now?

I’ve been continuing the body of work that I was working before. In a weird sort of way, it’s mirroring the circumstances that were brought to us by this quarantine and the COVID-19 outbreak. I was making this work about being alone and relating to myself.

I started this landscape work when I went on this residency right after graduation to the Netherlands. I’d always wanted to go explore Amsterdam—the freedom there and all the art that happens there was really intriguing to me. The residency offered a house about an hour outside of Amsterdam, kind of in the middle of nowhere. It was giving you the gift of time and solitude, so it was a lot like quarantine.

It was far enough out of the major city that not many people spoke English, and there were big expansive fields that I just spent a lot of time by myself in, thinking about where I wanted to go in the future since I had just graduated, thinking about how it really felt to be somewhere so far away, somewhere so new.

I’ve been really feeding of those feelings since I’ve come back, so even though it’s a been a little more than a year now, all that stuff is resurfacing now that we’re all in our own spaces.

2. How do you achieve the look you make in your paintings?

My relationship with paint has always been a very excessive and sloppy one. I love pouring and sweeping and layering different viscosities of paint, because you think you’re creating one scene but then you walk away and let it dry and it becomes completely something else. The paint reacts to itself and the paint next to it—the motion of the strokes, it becomes its own thing, and I absolutely love that.

In a way, I’m there creating the scene, but then through chance, because everything is so sloppy and wet, it creates its own thing with its own scene. I have the tendency to be apprehensive, so you’re making the decisions, but then when you walk away it’s making up its own mind.

It’s a really interesting process, too, because I’m doing all this work topographically, so the canvases are laying on the floor while I’m trying to wrangle all of this paint and its puddling and splattering all over the place, so they’re creating themselves on the ground. And then once everything dries and you put it up on the wall, it has a completely different feeling. Some of the large work, you’re dwarfed by it, whereas when you were making it, you were hovering over it. You were in a position of power.

3. What’s the inspiration behind these works?

I really try to keep the studio practice fresh. Whenever I feel like I’m getting into a routine or building up too many go-to marks, I try to break out of that as much as I can. Often I’ll try to use colors I really hate. I don’t really love bright colors, so I think it started as a little challenge to myself, like problem-solving. I found this bright color that, to me, is just so distasteful, so figuring out how to balance the painting in all these different ways. 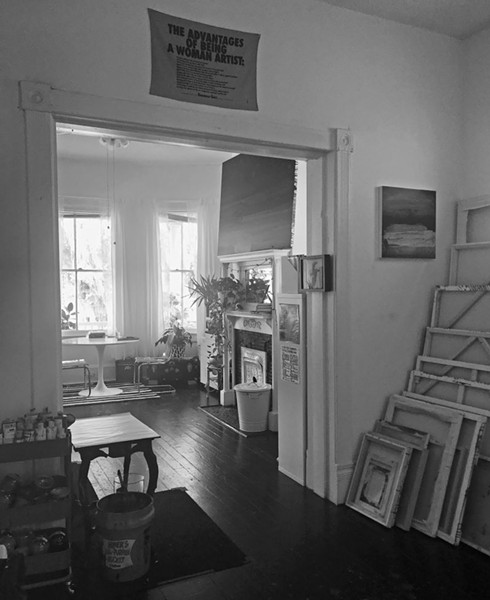 4. You also run The Space Between Gallery. What’s the response been to showing work in a home setting?

It’s an interesting space because it has a lot of natural light, but it also has those distinct features of Victorian historic homes, so you get this feeling of residential and familiarity, but also clean, open space to show work that’s not a commercial gallery. There’s slim pickins right now in Savannah, so it’s nice to be able to help out fellow artists, too, which is why I did it.

I’ve noticed lots more discussion and hanging out, because perhaps the residential setting creates more of a community. But also, setting up these shows is interesting because it’s not set up for exhibition after exhibition—it’s a home and a studio.

There’s a lot of problem-solving that has to go into place for lighting and displaying non-traditional sort of artwork.

5.What was it like for you to transition to being a gallery owner?

It was a real pain to empty everything out and put all of this work and supplies into the portion that I live in, so that was rough. But it was really cool because after it was all over and I got to bring everything back into this space, I felt this crazy pent-up energy of creativity that I feed off of from all the different artists that have been showing and coming to look at the work, and it’s always really therapeutic to rearrange things.

It was amazing to get back to work finally. I didn’t have access to my studio for a month, and all of a sudden there was this stored energy that I got to selfishly feed off of for months after.